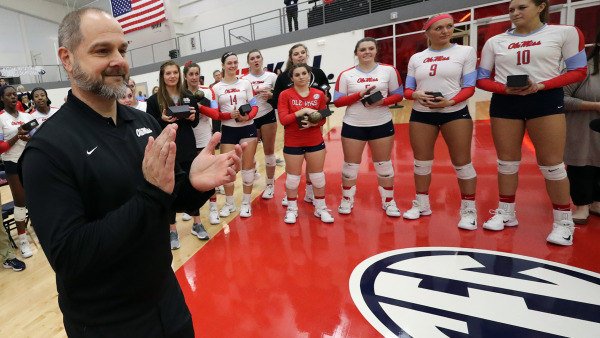 Building the Ole Miss program from the bottom of the SEC to the NIVC Championship in four seasons has earned Rebel head coach Steven Roberts a four-year contract extension, the longest allowable by the state. Current Photo via Ole Miss Athletics

Building the Ole Miss program from the bottom of the SEC to the NIVC Championship in four seasons has earned Rebel head coach Steven McRoberts a four-year contract extension, the longest allowable by the state.

All told, Robert’s squads have posted an 83-49 record in four seasons, including a 22-14 effort in 2017. The 22 wins were the most for the Rebels in the rally scoring era and marked the fourth-straight winning season in program history, a first in three decades. The 2017 team also set season records for kills, assists, digs and blocks.

“Coach McRoberts has done a great job of steadily building our program since he arrived at Ole Miss,” Vice Chancellor of Intercollegiate Athletics Ross Bjork said. “His intentional approach to recruiting, coaching and developing our student-athletes has paid off with record-setting individual performances, team records and the 2017 NIVC Championship. His teams have also competed in the classroom by having a perfect graduation success rate since he arrived.

“The foundation for long-term success has been put in place and the next step is competing for SEC and NCAA Championships. Combined with the investment in the brand new Gillom Athletics Performance Center, Coach McRoberts has Ole Miss Volleyball poised for many breakout performances in the years to come. We are excited that Coach McRoberts and his family are here at Ole Miss for the long term.”

Under his tutelage, outside hitter Lexi Thompson and Kate Gibson joined the elite 1000 kill/1000 dig club, the first to do so in Ole Miss history. Sophomore outside hitter Emily Stroup earned AVC All-Region honors and led the Rebels with NIVC Championship MVP accolades to cap a year that saw her post a season-record 474 kills.

“I am so blessed to be the head volleyball coach at Ole Miss,” McRoberts said. “I want to thank Ross and Executive Associate Athletics Director Lynnette Johnson for committing to the vision of our program. Getting a contract extension is a direct reflection on how well our staff and players have done to get this program moving in the right direction. We had an exciting end to 2017, and this is just the beginning. Hotty Toddy!”

There is NO PLACE I’d rather be! Hotty Toddy! https://t.co/opmhJHXvxr