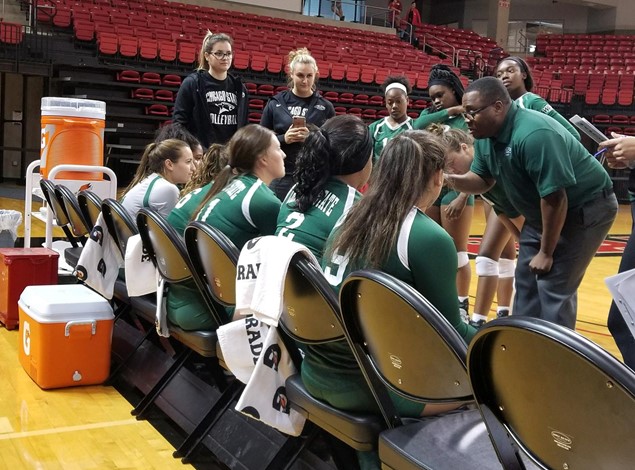 Chicago State is tacking on three transfers to their roster for 2018. Archive Photo via Chicago State Athletics/Volleyball

Three transfers will be joining Chicago State’s women’s volleyball program for 2018, with two from the junior college ranks and one previously at an NAIA school. That trio is right side Kirah Williams-Shephard, outside hitter Beatriz Palmieri and right side Gabby Pearl.

A 6’2″ opposite, Williams-Shephard will be a junior with two years left of play in 2018 and is immediately eligible. In the last of her two previous seasons at Hillsborough Community College, Williams-Shephard was First Team All-Suncoast Conference as well as FCSAA State all-tournament team. In total for the year she notched 2.99 kills per set on a .301 mark for a team that went 23-11.

“Kirah has a powerful swing and can hit a variety of angles. She will be an immediate offensive threat and a bully on the right side,” Chicago State head coach Brandon Reeves said in the team’s release of the addition. “We’re eager to see her competitive nature on the court and utilize her strength along the net. Adding Kirah to a dynamic incoming class will bring our 2018 roster to a new level.”

On the other pin comes Palmieri, who stands as a 5’11” native of Sao Paulo, Brazil. Previously, Palmieri attended Otero Junior College for two seasons and will also be a junior in the fall with immediate eligibility. As a freshman, she logged per set numbers of 3.24 kills and 3.84 digs in 2016. Then, in 2017 she totaled per set digits of 3.07 kills and 4.33 digs while coming in eighth in the NJCAA in total kills (475). Those numbers led to her being NJCAA Region IX all-tournament team honors for the second straight season.

Rounding out the trio is the 6’2″ Pearl, who plays right side and will be a senior with immediate eligibility in 2018. She was last with Lourdes University in the NAIA Division II classification and saw action in 16 matches in which she recorded 15 kills, eight digs and five blocks. Her stint before that was with Parkland College where she pushed the team to a second straight NJCAA Division II National Championship and logged 1.66 kills on a .387 mark as a sophomore.

“I am very ecstatic to have Gabby come to our program this season as she comes in with some success on the court and in the classroom,” Reeves added in a separate release for her signing. “We are looking forward to her helping us contend in the Western Athletic Conference.”

Chicago State finished the 2017 season at 10-21 overall and 1-13 as a member of the Western Athletic Conference (WAC). The trio gives the team two opposites for 2018 as well as four outside hitters as they look for a third straight season of improvement in the win column.