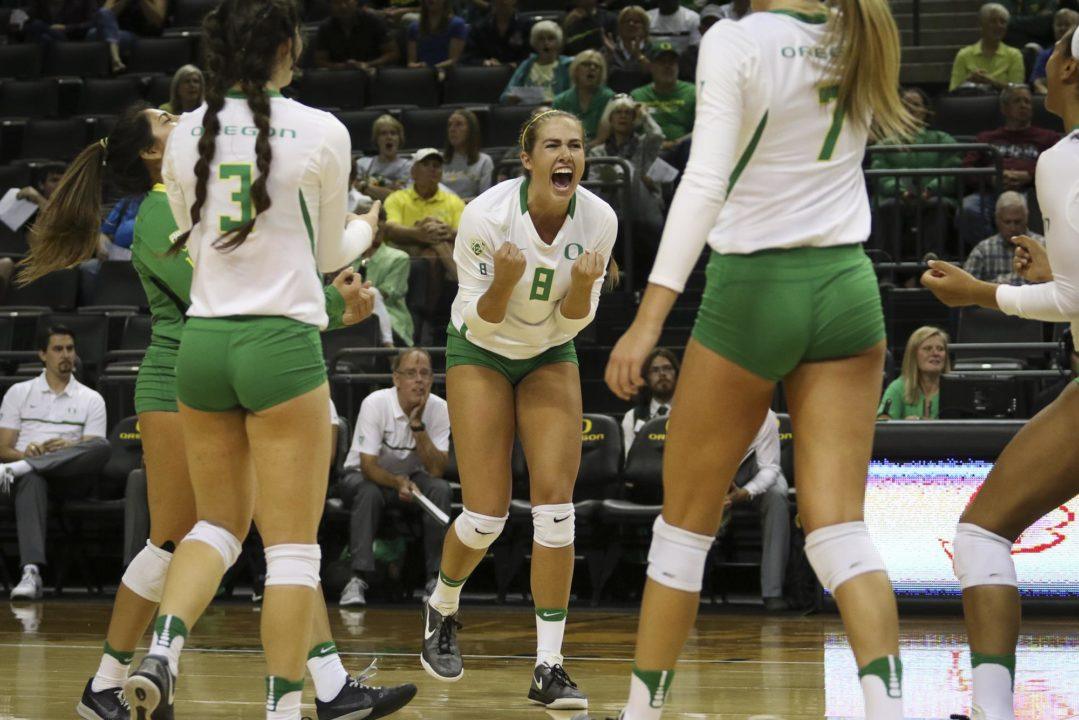 Oregon began their journey in the NCAA Tournament with a convincing win over Miami Ohio in 4 sets (25-22, 25-17, 22-25, 25-19). Led by Lindsey Vander Weide who tallied 18 kills an ace and 10 digs, the Ducks forced Miami to play out of system and into the block as Oregon recorded 11 team block kills. Maggie Scott recorded 31 assists and August Raskie had 26.

Miami finishes their season 24-7 and finished runners up in the MAC Conference tournament. With just three seniors graduating, next year should be another dominate one.

Oregon advance to the second round where they will face the hosting Michigan with the winner advancing to the sweet sixteen.

“They’re a good team, a solid team,” head coach Jim Mooresaid of the Redhawks. “We knew that and it didn’t surprise us, but a very good job by them and we’re happy to move on.”

How It Happened: Oregon was challenged from the get-go by Miami (Ohio) (24-7), as the Redhawks jumped out to early leads in each of the first two sets. The Ducks used a 6-1 run in the first set to pull ahead after trailing by four and come away with a win, with freshman Jolie Rasmussen ending the set with a pair of kills. Down 11-10 in the second, Oregon ripped off a commanding 15-6 stretch to go up 2-0 at intermission.

Who Stood Out: The Ducks’ offense was fueled by tremendous nights from sophomore Lindsey Vander Weide (18 kills, .436) and freshman Ronika Stone (16 kills, .552), who combined for 34 of Oregon‘s 66 kills while committing just one attack error. Vander Weide added 10 digs to record her team-best 12th double-double of the year. Stone was dominant in the final set with seven kills on 10 swings.

What It Means: The Ducks advance past the first round of the NCAA tournament for the eighth time in program history, seventh under Moore, and improve to 15-13 (.536) all-time in the tournament. Oregon‘s win is a welcome sight after being bounced from the postseason in the first round last season, and moves the program one step closer to its fifth-ever Sweet 16 appearance.

Quotes:
Jim Moore, Head Coach
On Miami (Ohio)…
“They’re a good team, a solid team. We knew that and it didn’t surprise us, but a very good job by them and we’re happy to move on.”

“Those are smart kids. They’re doing some things different, and I like that a lot. They’re not doing the same old thing and I love that, I think that’s special, but it gave us fits, which is good.”

Ronika Stone, Freshman Middle Blocker
On her success tonight…
“As long as I keep playing my game, things seem to go right for me. Our setters did a really good job of making our hitters available and really spread it out, and I was lucky enough to be able to put them down tonight.”

Lindsey Vander Weide, Sophomore Outside Hitter
On the slow starts and finishing the first set strong…
“We’ve been in these situations a lot when we don’t start as fast as we want to, so I think that’s something we’ve worked on the entire year. But I think that finish definitely gave us momentum going into the second set. We just have to start stronger.”

Up Next: The Ducks will try to move one step closer to the ultimate prize of an NCAA Championship on Friday at 4:30 p.m. PT when they take on Michigan at Crisler Arena, with the winner booking a ticket to the Sweet 16.

The RedHawks held leads in all four sets of the match, but Oregon’s talented attackers hit .336 for the contest, while holding Miami to a .178 attack percentage.

Junior right side hitter Olivia Rusek finished with the team lead of 13 kills, while junior libero Maeve McDonald had 25 digs. She became only the second player in school history to reach 1,500 career digs. Sophomore setter Mackenzie Zielinski had a double-double with 20 assists and 18 digs.

Junior right side hitter Katie Tomasic, sophomore outside hitter Stela Kukoc and Rusek each had kills as Miami built a 5-2 lead to begin set one. The Ducks fought back to tie it at seven, but a kill from senior middle hitter Paige Hill off an assist from Zielinski put the ‘Hawks back on top. Oregon took the lead at 13-12, but five straight points for Miami, capped off by back-to-back blocks from Rusek and senior outside hitter Maris Below and a service ace from Kukoc gave the RedHawks their largest lead at 17-13. Oregon scored the next two, but a kill from Below off an assist by senior setter Krista Brakauskas made it 18-15. The Ducks responded with a 7-1 run to take a 22-19 lead and force Miami to call timeout. Out of the break, Tomasic put down a kill while Below recorded a service ace to close MU to within one. That would be as close as it would get as Oregon finished the set with a 3-1 run to take a 25-22 victory.

Set two started out well for the RedHawks as a kill from junior middle hitter Meredith Stutz put Miami on top, 6-3. Oregon would tie it at nine, but kills from Hill and Rusek put Miami back in front. The Ducks went on a 7-2 run to take control at 17-13. Oregon committed a service error at that point, but four straight point by the Ducks put the set out of reach. Zielinski and Rusek each had kills, but Oregon took a 25-17 win to send the match into intermission up 2-0.

McDonald recorded a service ace, while Stutz had back-to-back solo blocks as part of Miami’s start to set three. Back-to-back kills from Tomasic gave the RedHawks a 10-5 advantage. The Ducks pulled to within two at 9-11, but kills from Hill and Kukoc got MU’s offense going again. Leading 17-15, kills from Stutz and Hill were part of a 4-0 run that made it 21-15 in favor of the Red and White. Oregon fought back with five straight to pull within one at 20-21, but Hill ended the run with a kill. Leading 22-21, a kill from Kukoc and a Duck attack error gave Miami set point. The Ducks fought it off once, but their service error gave the RedHawks a 25-22 victory and sent the match forward.

A kill by Tomasic, an Oregon attack error and a kill from Rusek saw Miami quickly take a 3-0 advantage in set four. Oregon scored the next three, which started a back-and forth battle that lasted throughout the first half of the frame. The lead changed four times until Rusek had two kills to tie the score at 14. Tied at 15 after a kill from Stutz, a 4-0 run from the Ducks gave them control. Below tried to stop the bleeding with a kill, but two more points from Oregon made it 21-16. A service error by the Ducks and a kill from Hill pulled the RedHawks to within three at 18-21, but Oregon closed on a 4-1 run to finish off a 25-19 victory and take the match 3-1.

Tomasic had 11 kills for Miami, while Hill finished with 10. Brakauskas led the RedHawks with 21 assists.

Miami completes its 2016 season with its first MAC Regular Season Championship since 1998 and the most victories since winning 27 in that same season. The RedHawks three seniors, Below, Brakauskas and Hill, leave MU with 78-43 record these past four seasons.