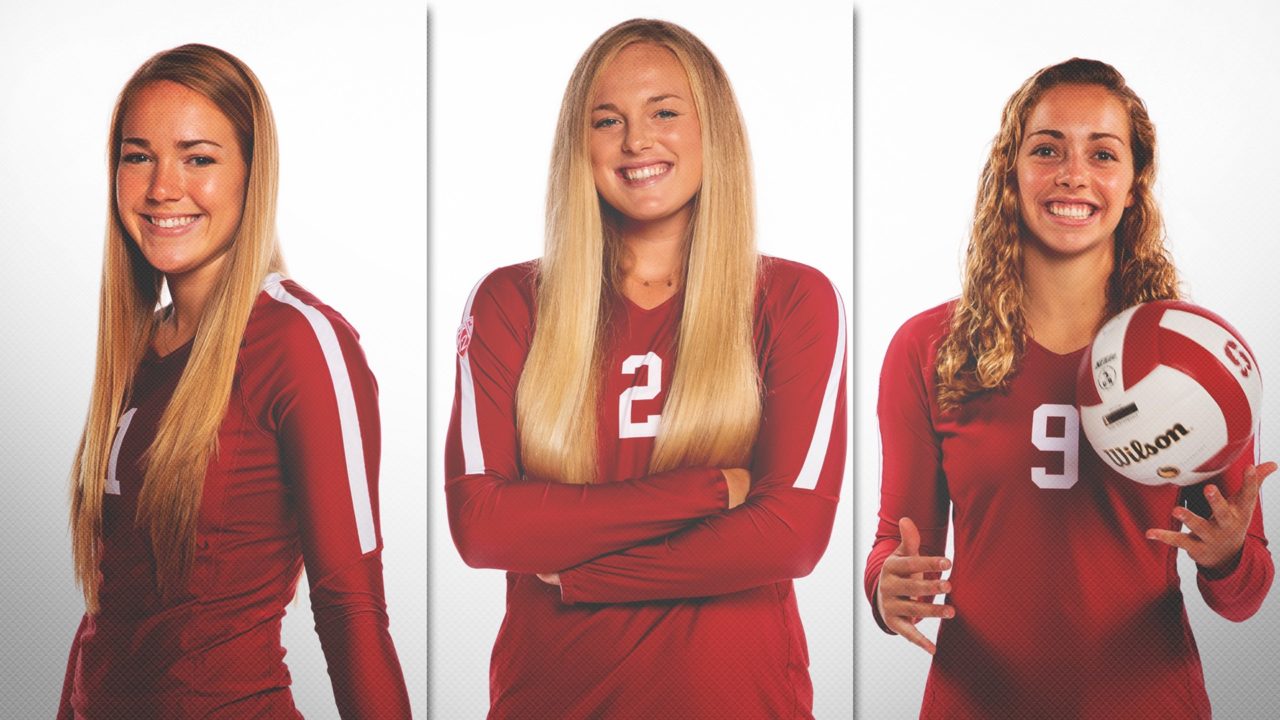 Stanford junior outside hitter Kathryn Plummer was voted the Pac-12 Volleyball Player of the Year for the second-straight year, while teammates Jenna Gray and Morgan Hentz were tabbed as Setter and Libero of the Year and USC’s Raquel Lazaro was selected as Freshman of the Year. Current Photo via Stanford Athletics

In addition, STANFORD junior Jenna Gray was tabbed the Pac-12 Setter of the Year and her junior teammate Morgan Hentz was selected the Pac-12 Libero of the Year, both earning their respective honors for the second-consecutive year.

KATHRYN PLUMMER, JR, OH, STANFORD (Aliso Viejo, Calif.)
Kathryn Plummer was voted the Pac-12 Player of the Year for the second-consecutive year, becoming the sixth player in league history to win the honor in back-to-back seasons. She joins fellow Stanford Cardinals to have achieved the feat including Kerri Walsh (1998-99), Logan Tom (2001-02) and Foluke Akinradewo (2007-08). UCLA’s Daiva Tomkus was the first to repeat as player of the year in 1998 and 1989, and Washington’s Krista Vansant was the most recent back-to-back honoree (2013-14) before Plummer. Last year as a sophomore, Plummer became just the second player in Conference history and first in 27 years to be named the league’s player of the year a season after being voted the league’s freshman of the year. It is the 16th time a Cardinal has earned the Pac-12’s top honor.

An All-Pac-12 honoree for the third-straight year, Plummer has led the Cardinal to its 18th Pac-12 crown and second-straight. Stanford won the title going a perfect 20-0 in league play becoming the first team since 2003 to run the table in league play. Seventh in the nation in kills per set (4.78) and fourth in points per set (5.48), she has helped Stanford post the second-best kills average in the country at 14.95. Plummer was voted Pac-12 Offensive Player of the Week three times this season (Sept. 10, Sept. 17, Oct. 15). She eclipsed the 1,000-kill mark this season, tallying 1,426 to-date.

.@plummdawgg is the sixth player in @pac12 history to take home Player of the Year honors in back-to-back seasons 👊.#GoStanford pic.twitter.com/JIRrrovTLI

RAQUEL LÁZARO, S, USC (Córdoba, Spain)
Raquel Lázaro is the eighth Trojan to garner Pac-12 Freshman of the Year nods and the first since 2013. She is also the fourth Trojan to win the award since 2010. Other notable Trojan winners of the honor are April Ross (2000) and Samantha Bricio (2012).

Lázaro ranks third in the Pac-12 in assists per set, averaging 11.20 aps. She is one of just two freshmen in the country to rank in the top 20 in the statistical category, boasting the second-best average among the nation’s freshman class, also ranking 20th among all players. Lázaro was voted Pac-12 Freshman of the Week four times this season. With her directing the offense, she has helped USC to a tie for second place in the Pac-12 standings and the No. 11 seed in the NCAA Tournament.

💪 Felicidades @RaquelitaLC! Our first-year setter is the #Pac12VB Freshman of the Year! She is the eighth Trojan to earn Pac-12 FOY honors! #FightOn ✌️🏐🇪🇸 pic.twitter.com/67QPua827O

JENNA GRAY, JR, STANFORD (Shawnee, Kansas)
Junior Jenna Gray is the Pac-12 Setter of the Year for the second-straight year, marking the fifth time in the eight-year history of the award a Cardinal has won the award. She and former Cardinal Madi Bugg (2013-15) are the only two to have won the award multiple times. Gray has helped the Cardinal claim the Pac-12 crown for the 18th time in program history, the team going a perfect 20-0. She ranks second in the country in assists per set with 12.43 aps, helping the Cardinal post the third-best assists average in the country (14.09). With her directing the attack, the Stanford attack is second in the country in kills per set (14.95) and hitting percentage (.306). Gray has accumulated 3,799 career assists, ranking 18th among the NCAA’s active leaders.

LIBERO OF THE YEAR

MORGAN HENTZ, JR, STANFORD (Lakeside Park, Ky.)
Junior Morgan Hentz is the third multiple-time recipient of the Pac-12 Libero of the Year award after winning the honor for the second-consecutive year. Only four players have won the honor in the eight years a libero of the year has been selected. With Hentz anchoring the defense, the Cardinal have the best opponent hitting percentage in the Pac-12, allowing other teams just a .165 hitting rate. She was named Pac-12 Defensive Player of the Week five times this season. She is one of 35 players in league history to collect over 1,500 career digs (1,580 digs).

COACH OF THE YEAR

KEVIN HAMBLY, STANFORD
Kevin Hambly becomes the third-different Stanford head coach to win the Pac-12 Coach of the Year honor, which is voted on by his league peers. It marks the eighth time a Cardinal mentor garners the award after Don Shaw (1987, 1991, 1997-co) and John Dunning (2001, 2007-08, 2012) won the award multiple times.

In his second season on the Stanford sideline, Hambly wins the coach of the year award after leading the Cardinal to a second-consecutive Pac-12 title, winning the 2018 crown in dominant fashion and going 20-0 in league play to become the first undefeated Pac-12 Champion in 15 years. It is also marks the second Pac-12 team that has posted 20 league victories and first since 2011.

Stanford has lost just eight sets in league play this season, going to five sets just once. It has lost 13 sets in all of 2018, three of those coming in the team’s only setback of the season back in August. Claiming the No. 1-overall seed in the NCAA Tournament, Stanford was ranked No. 1 in the country after the conclusion of the regular season, ranking in the top two in the country every week except one. The Cardinal have won 26-straight matches and 32-straight at Maples Pavilion, the longest current home win streak in the nation.

Below is the 18-member All-Pac-12 volleyball team and seven-member Pac-12 All-Freshman team, which were also voted on by the league’s 12 head coaches. Head coaches were not allowed to vote for their own player or themselves. Eight Pac-12 teams are headed to the NCAA Tournament, which begins this week, the most of any conference in the country.