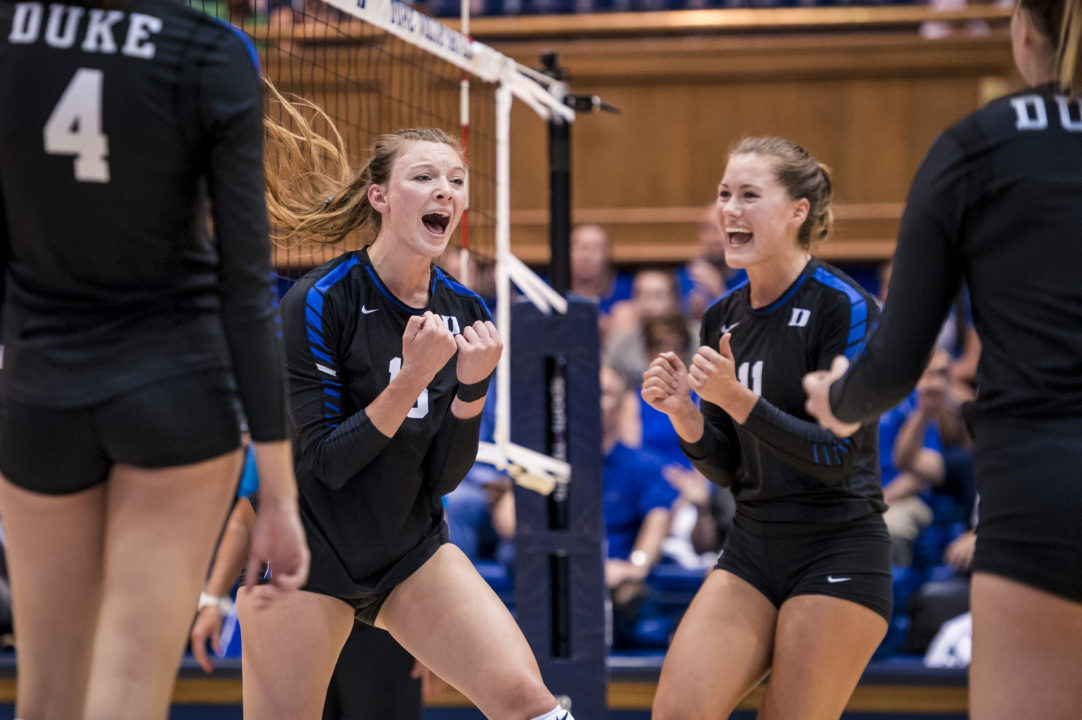 Duke setter/outside hitter Andie Shelton averaged 5.7 assists, 2.9 kills, 1.8 digs and 1.10 blocks per set on a .377 hitting clip, while guiding the Blue Devils to a .287 effort in a pair of five-set wins and on to an NCAA Tournament at-large berth. Current Photo via Duke Athletics

This week’s VolleyMob Player of the Week truly impacted all sides of the ball for her team – hitting, setting, digging and blocking – in two victories which helped cement her team’s at-large berth to the NCAA Tournament.

The graduate student posted 31 assists, 12 kills, seven digs, five blocks and an ace on a .370 hitting effort against Notre Dame as the team hit .250. The Stockton, California, native notched a 26-assist, 17 kill, 11 dig triple double to go with six blocks and two aces and a .382 hitting effort against Miami as the team hit .322. The triple double was her sixth of the season, leading all of NCAA Division I in the category. Shelton earned ACC Player of the Week honors for her efforts, making her the first Blue Devil to earn multiple conference nods in the same season since 2013 (following a Sept. 3 award).

Averaged 6.44 digs per set; posted 40 digs in a five-set win over Tulsa; added 18 digs at North Texas; made good on 96.2 percent of her serve reception tries; American Athletic Conference Defensive Player of the Week

Averaged 5.3 digs per set, while making good on all 58 serve reception chances; notched 27 digs, three assists and an ace in a five-set win over No. 3 Minnesota; added 26 digs and two assists in a five-set loss to No. 5 Wisconsin; Big Ten Defensive Player of the Week