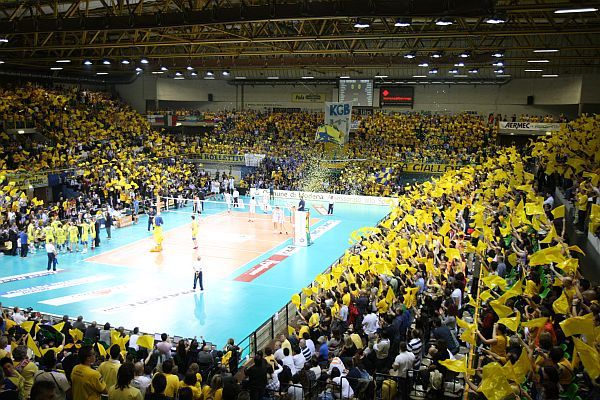 Attendance was up league-wide after Italy's silver medal finish at the Olympics. Current

Coming off its first league title since 2002, Italy’s Modena Volley has set new attendance records this season to lead the SuperLega. Across 25 matches in the Super Cup, SuperLiga, Italian Cup, and Champions League, the club welcomed in 104,271 fans – an average of 4,171 per game.

That includes a record-setting 5,219 fans in the PalaPanini on January 22nd for a match between Modena and Perugia, European silver medalists, in a rematch of last year’s championship final and 5,300 for the Super Cup Final against the same team. The arena’s official capacity is only 5,211. While neither team advanced to this year’s league final (Modena fell to Civitanova in the semis, Perugia lost to Trentino),  their head-to-heads was still the most-anticipated match of the season.

In total, Modena‘s attendance is up 12% as compared to last year, and they hosted 5 of the top 8 most attended games in all competitions. Attendance was up this year league-wide as well – the average of the top 30-attended matches across all domestic competition increased from just 4,588 last year to 5,116 this year: a boost that can likely be attributed to Italy’s silver-medal run at last summer’s Olympic Games that coincided with the return to Italy this season of the country’s superstar and one of their most popular players Ivan Zaytsev. Zaytsev, who had played in Russia with Dinamo Moscow from 2014-2016, joined Perugia after the Olympics.

The single highest-attended game int he league so far this season was the Italian SuperLeague Cup Final between Civitanova and Trentino, which drew 12,000 fans to the Casalecchio di Reno.