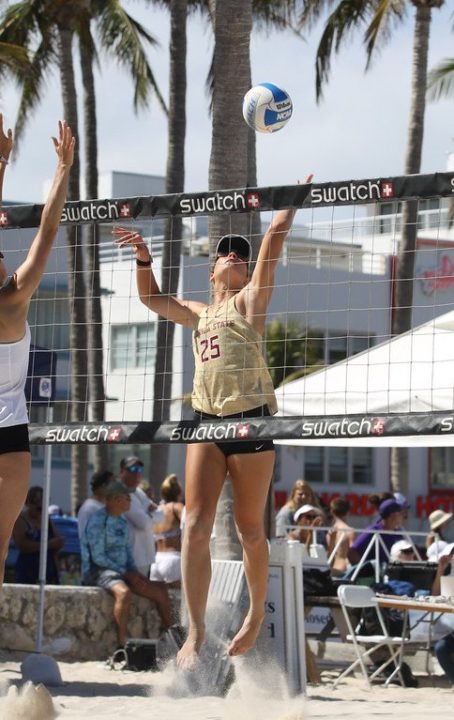 In 11 Top 20 matches on Friday, only TCU was able to upset the rankings table, knocking off No. 11 Georgia State in a 4-1 effort at the Seminole Beach Battle. FSU's Tory Paranagua notched her 100th career victory, moving into fifth all-time.  Current

In 11 Top 20 matches on Friday, only TCU was able to upset the rankings table, knocking off No. 11 Georgia State in a 4-1 effort at the Seminole Beach Battle.

The victory, which avenged a March 30 loss to the Panthers, marked the first ranked win for the Horned Frogs in 2018. TCU won on courts 4, 5 and 3 to sew up the win and then saw top duo Cassie House and Haven Hill outlast Teegan Van Gunst and Annika Van Gunst 33-31, 21-9 for good measure. The Horned Frogs added a 5-0 win over unranked UAB, before falling to No. 7 Florida State 5-0.

Congrats to @Tnagua, who hit win number ? today on her home court! pic.twitter.com/EJUzCdyaWl

FSU did not drop a single set in the three victories, which came after the team was delivered their 2017 CCSA Championship rings.

Out West at the Wildcat Invitational, No. 14 Cal and No. 15 Arizona each posted a pair of wins. Both teams bested No. 17 Stetson and topped Arizona State. The Bears had the upper hand against the Hatters with a 4-1 win, while Arizona edged the east coast visitors 3-2. Both teams blanked the Sun Devils. Arizona has now won four straight matches, heading into matchups with Colorado Mesa and Cal on Saturday.