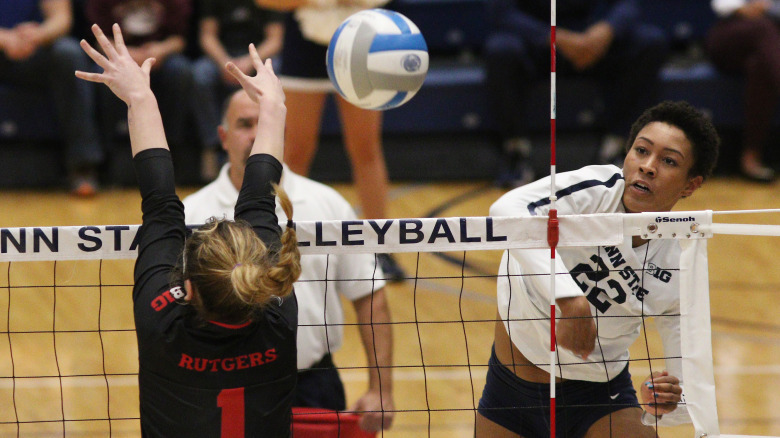 Penn State ate their Thanksgiving dinners with two huge hurdles in front of them. Before the big one, against Minnesota on Saturday, the Nittany Lions had a Friday night showdown against Wisconsin and the leading National Freshman of the Year Dana Rettke. This match was very much in danger of being a “lookahead game” for Penn State – for even though Wisconsin is a little down from last year, they’re still a very good team with a number of stars capable of beating anyone in the country.

The first set built those fears, after Wisconsin beat Penn State 25-18. In that opening frame, the Nittany Lions hit just .032 – far below their nation leading (by far) .351 hitting percentage this season.

During the change, however, the Nittany Lions came alive. In the 2nd set, Penn State hit .448 (16 kills, 3 errors), led by 5 from Simone Lee and 4 from Haleigh Washington. Wisconsin had 7 hitting errors in each of the game’s 4 sets, but in the 2nd they came with just 9 kills, resulting in an .071 hitting percentage.

Rettke, who will be the Big Ten Freshman of the Year at least, finished with 13 kills, 3 errors, and a .476 hitting percentage. That led a team that hit just .158 as a team – Lauryn Gillis had just 3 kills and 7 errors, which is the 3rd time in the last 4 games that she’s had more errors than kills).

The Nittany Lions were also boosted by a season-high 4 aces from one of the two setters in their 5-2 offense: Bryanna Weskircher. She now has 7 aces in the team’s last 3 games and just 3 service errors against them.

For Wisconsin, senior Kelli Bates recorded her 30th career double-double with 12 digs and 11 kills. Freshman Grace Loberg entered the game in the 3rd set to give the Badgers and offensive spark and did just that with 8 kills in just 2 played.

Penn State’s regular-season finale comes on Saturday at 8:30 Eastern in Minneapolis. A win there will lock up at least a share of the Big Ten title and a #1 seed in the NCAA Tournament.

This girl has some MAJOR power ? pic.twitter.com/xUnCqT1Qez

The Wisconsin native Simone Lee (Menomonee Falls, Wis.) led the way with 14 kills and 14 digs for the double-double, while also adding two blocks.

The Nittany Lions started cold, hitting a season-low .032, in the open set, while Wisconsin relied heavily on the arm of Dana Rettke, who put down eight kills on nine attempts, while the Badgers as a team hit just .194. The Badgers took the opener, 25-18.

In the second set, Penn State bounced back, hitting .448, led by a 4-0-5 performance from Haleigh Washington, while Simone Lee added five of her own. Defensively, Heidi Thelen made three key blocks, and the Nittany Lions held the Badgers to .071 hitting with just nine kills, compared the Penn State’s 16.

Penn State jumped out to a 2-1 set lead with a powerful third set, led by Thelen. The senior put down four kills on all four of her attempts. Lee added some defensive plays to her arsenal as she scooped up six in the third set alone. Bryanna Weiskircher helped Penn State extend the lead with two aces as well.

The Nittany Lions head to Minneapolis, Minn., to take on the eighth-ranked Minnesota Gophers at 8:30 p.m. ET on Saturday evening. The match will be broadcast on the Big Ten Network.

“There were elements that we played well. We just didn’t play well enough to beat these guys. I loved the effort we were playing with defensively. I thought we executed the game plan for the most part.

“This team’s getting closer. I think that’s one of the things that if you listen to (the players) right now, they feel like we’re getting closer. You have to remember, this is a pretty young team. I don’t sense a single person losing confidence in themselves. I see feistiness up here. I see hunger and drive. That’s one of the things we discussed downstairs, that there were positives to take away from that game and let that build you up. Everything else is learning. Let’s keep learning.”
-Head coach Kelly Sheffield

“I thought the first time we played (Penn State), we stuck with them even though we weren’t playing very well at all. This time we had to fight and I thought that we played a lot better this time. I think we keep making those steps, and that’s going to help us towards the tournament getting some momentum. I thought we battled really hard tonight.”
-Freshman Sydney Hilley

Up next
The Badgers conclude Big Ten Conference play tomorrow night taking on Rutgers in the UW Field House. The match starts at 7 p.m. and seniors Lauryn Gillis and Kelli Bates will be honored after the match.

The 64-team bracket for the 2017 NCAA Tournament will be announced Sunday at 8 p.m. on ESPNU. The Badgers are looking for their fifth straight and 19th overall tournament appearance.