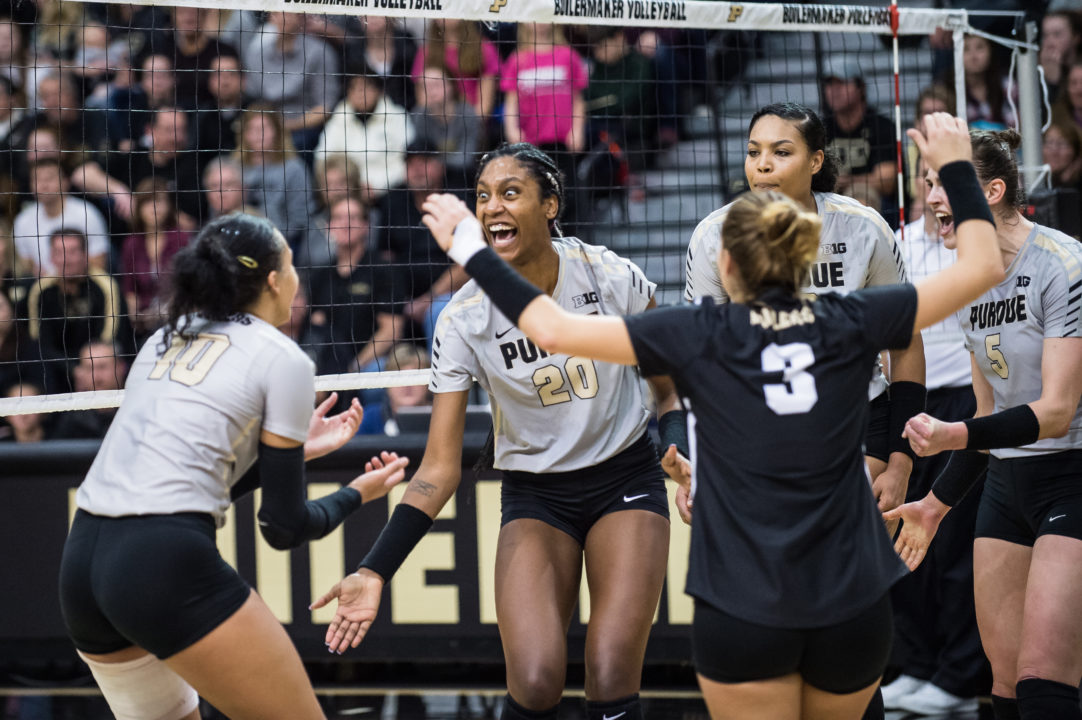 #17 Purdue finished their regular season in style with a four-set win over #11 Michigan State on Senior Night in West Lafayette, Indiana. Current Photo via Purdue Athletics

WEST LAFAYETTE, Ind. – On Senior Night in sold-out Holloway Gymnasium, #17 Purdue earned a hard-fought upset of #11 Michigan State, 3-1 (20-25, 25-23, 25-20, 25-21). It was the fourth sellout for Purdue this season, and saw the celebration of the Boilers’ four seniors, middle blocker Danielle Cuttino, outside hitter Azariah Stahl, defensive specialist Carissa Damler and setter Ashley Evans. All were contributors in the upset win. The win also marked the fourth AVCA Top-10 win of the season (Creighton, Minnesota and Wisconsin were the others), a first for the program. It was also coach Dave Shondell‘s 56th ranked win in his tenure at Purdue.

Purdue’s Danielle Cuttino pounded a match-high 22 kills on .457 hitting with a team-high-tying 4 blocks. Azariah Stahl, limited in her offensive output, made up for it with 11 digs and a team-high-tying 4 blocks on defense. Setter Ashley Evans registered yet another double-double with a match-high 44 assists and dug 11 balls. She also contributed 4 blocks at the net. Libero Brooke Peters had a team-high 16 digs. Defensive specialist Jena Otec aced the Spartans three times, becoming the top freshman in the Big Ten in aces with 27. Evans, who passed the 1,000 career digs barrier in her last match against Michigan, became the only member of the 4,000 assist/1,000 dig club at Purdue early in the second set.

Sparty was led offensively by outside hitter Autumn Bailey with 17 kills, hitting .350 against Purdue. She filled the stat sheet with 8 digs, 2 aces and 2 blocks. Alyssa Garvelink added 13 kills on .333 hitting with 4 blocks of her own. Rounding out the double-digit kill producers for Michigan State was Holly Tolliver with 12 kills. She also contributed 8 digs and a career-high 5 blocks. Megan Tompkins had a match-high 6 blocks for the Spartans. Setter Rachel Minarick ran the offense with 43 assists, dug 7 balls and blocked 2 more. Libero Jayme Cox dug a match-high 18 balls. Additionally, Michigan State’s 11 blocks was the first time in a Big Ten match all season that the Spartans hit double digits in blocks.

Purdue (RPI: 25) now awaits the NCAA Committee’s selection choices for the Tournament. Michigan State (RPI: 17) still has an outside chance of hosting the first weekend of the tournament.

Victories over No. 9 Creighton, No. 5 Minnesota, No. 10 Wisconsin and No. 10 Michigan State mark the first time in program history the Boilermakers have defeated four top-10 opponents in a single season. Purdue now has 56 ranked wins under head coach Dave Shondell and of those wins, 41 have been upsets. Of Purdue’s 33 wins over ranked opponents in West Lafayette, Indiana, since 2003 when Shondell took over, the Boilermakers were the lesser-ranked team in 25 of them.

The Boilermakers were fueled by elite performances by their seniors as Ashley Evans, Danielle Cuttino, Azariah Stahl and Carissa Damler were all key contributors in the win. Evans registered 44 assists, 11 digs, three kills, a service ace and four blocks to earn her 10th double-double of the season. With her performance, she becomes the seventh Boilermaker in program history to earn 4,000 career assists and is the first Purdue student-athlete to ever register 4,000 assists and 1,000 digs. Damler matched Evans with an ace of her own.

Cuttino was as dominant as she’s ever been in her final match on Belin Court. The Indianapolis, Indiana, native registered 22 kills on 35 swings and hit .457 with four blocks to her credit. Fellow middle blocker Blake Mohler was also a consistent problem for the Spartans as she finished with 11 kills on 22 swings and hit .364 with four blocks as well. Combining the two efforts, Evans set her middles to 33 of Purdue’s 51 kills and a .421 hitting percentage as Cuttino and Mohler found the floor on 58-percent of the swings they took.

Sherridan Atkinson was contained to eight kills but denied two of Michigan State’s attempts and added an ace to her line. Caitlyn Newton factored in five clutch kills and a .272 hitting percentage in the final two sets.

Purdue’s defense was what eventually wore down the Spartans as three Boilermakers finished with dig numbers in double figures. First-year libero Brooke Peters earned 16 digs while Stahl matched Evans with 11 digs to go along with her four blocks. Freshman Jena Otec finished just two digs away from becoming Purdue’s fourth student-athlete with 10 digs or more. One of the conference’s toughest servers aced the Spartans three times and with her efforts from the service line, Otec leads all Big Ten freshmen with 27 service aces in conference play. Fellow freshman defensive specialist Julianna Reisinger also contributed five digs on the evening.

The match was tight, as the two teams battled through the first sets without any large runs – the Spartans were siding out at 62% over the first two frames, while Purdue managed 58%. The second set was a point-for-point battle, with the home team tying the match by eventually prevailing 25-23 in a frame that featured 15 tie scores and lead changes. The home team got some separation in the third set, holding MSU to an .088 hitting percentage and taking a 25-20 win, and then the Boilers hit .346 in the final set to close it out with a 25-21 win in the fourth set.

Danielle Cuttino made sure her senior night was a memorable one, as she grounded 22 kills and hit .457. Blake Molher had 11 kills and matched Cuttino’s team-best four blocks. Setter Ashley Evans had 44 assists and 11 digs for the double-double, adding four blocks (two solo).

For the Spartans, Autumn Bailey had 17 kills and hit .350, adding two aces, eight digs, and two blocks. Alyssa Garvelink finished with 13 kills and four blocks, while Megan Tompkins had a match-best six blocks and Holly Toliver had 12 kills and had a career-high five blocks. She added eight digs.