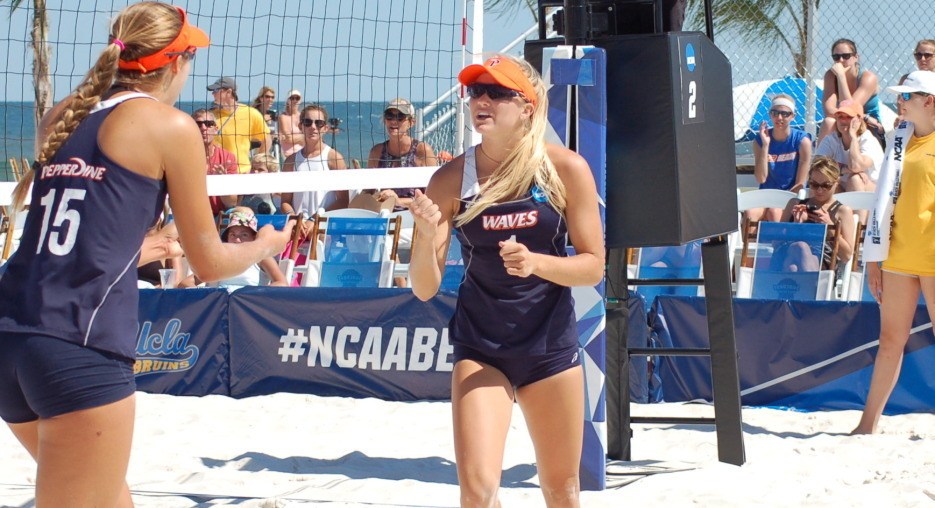 The Pepperdine beach volleyball team were tabbed to finish atop the West Coast Conference for the third-straight season, as voted by the league’s seven head coaches in the WCC Preseason Poll and released on Wednesday.  Current Photo via Pepperdine Athletics

The Pepperdine beach volleyball team were tabbed to finish atop the West Coast Conference for the third-straight season, as voted by the league’s seven head coaches in the WCC Preseason Poll and released on Wednesday.

Along with the four Waves, Saint Mary’s tabbed three to the preseason team, Loyola Marymount marked two and Pacific tabbed one.

Last season, Pepperdine made a run in the NCAA Championship, finishing as runner-up in Gulf Shores and amassing a 27-5 overall record throughout the season.  The team tabbed its second-straight West Coast Conference title in Santa Monica, Calif. as well.

Corinne Quiggle (Ponte Vedra Beach, Fla./Ponte Vedra HS) was a Volleyball Magazine All-American second team honoree last season, as well as earning All-WCC first team honors in 2017.  She has amassed a 73-15 all-time record, including a 64-11 dual record for the Waves.  Last season, she put up one of the Waves’ best records alongside partner Brittany Howard in the No. 2 position, possessing a 28-3 overall record.

Madalyn Roh (Scottsdale, Ariz./Chaparral HS) earned AVCA All-American and Volleyball Magazine All-American first team honors in 2017.  She is a two-time All-WCC first team honoree as well. Throughout her career, she has tallied a 41-15 all-time record, including a 20-12 record in the No. 1 position for the Waves in her sophomore campaign last season.

Skylar Caputo (Manhattan Beach, Calif./Mira Costa HS) has been an All-WCC second team performer in 2016 and 2017, while also marking WCC All-Freshman honors in her first season with the Waves.  She has produced a 43-11 overall recod throughout her career, including a 42-11 record when playing in the No. 3 position for Pepperdine.  Last season, Caputo went 22-7 alongside fellow preseason honoree Heidi Dyer.

Heidi Dyer (San Clemente, Calif./Saddleback Valley Christian HS) is a key component to both Pepperdine’s indoor and beach squads.  On the beach, she earned AVCA and DiG Magazine All-American first team honors in 2016, while marking WCC All-Freshman accolades in both indoor and beach in the 2015-16 season.  She earned All-WCC second team honors in 2017 on the beach and tabbed the 22-7 record in the No. 3 position alongside Caputo.  Throughout her career on the beach, Dyer has put up a 38-15 career record.

The Waves are nine days away from the 2018 campaign as the team opens the season in Arizona on February 23 with a round-robin against Cal Poly, Grand Canyon and LSU.  Follow @WavesBeachVB for updates and check on PepperdineWaves.com for full results, recaps and more.