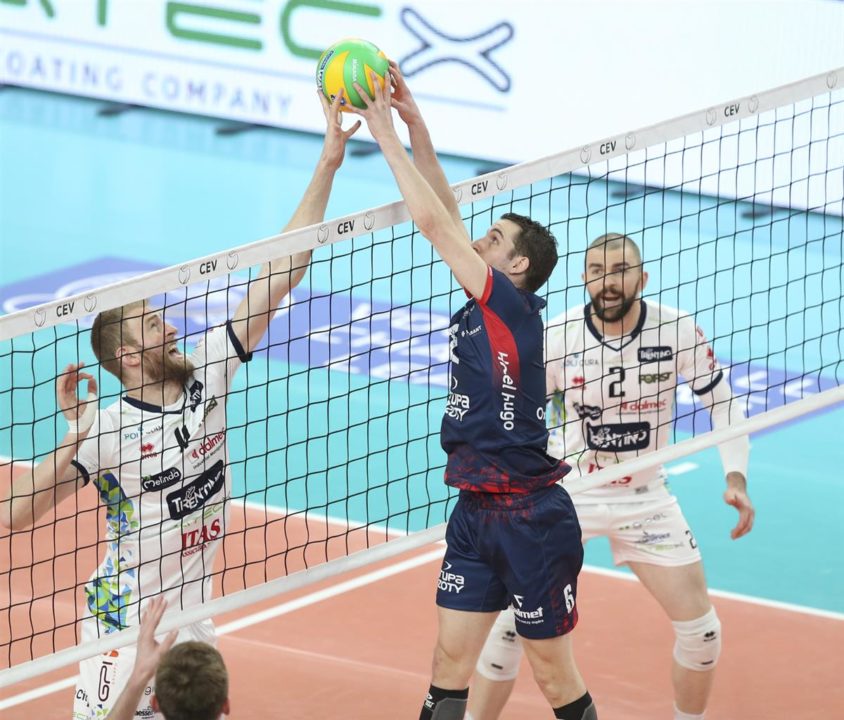 Zaksa Kedzierzyn-Kozle fought through five tough sets to take down Diatec Trentino on the road, handing Trentino only their 4th loss at home in the Champions League in 34 matches.  Current Photo via CEV

Zaksa Kedzierzyn-Kozle fought through five tough sets to take down Diatec Trentino on the road, handing Trentino only their 4th loss at home in the Champions League in 34 matches. In order to secure a second place finish, Trentino will have to win their final match of the 4th round, as their match against Noliko Maaseik is crucial, seeing as both teams have 3 wins in the pool.

“It was a hard-fought match; we had the ability to never give in and to believe in ourselves until the end. This is a beautiful and very important victory for us,” said Zaksa’s Maurice Torres.

It was a match of errors and it came down to who made the least amount. In total, there were 35 service errors in the match with Trentino posting 20 of them. They also committed 8 reception errors and 14 attacking errors. In the end, Zaksa scored fewer points their Trentino did overall at 77-83 but they significantly made up for this with fewer mistakes in the match.

Zaksa had four players with double-digit points – Torres (19), Rafal Buszek (17), Lukasz Wisniewski (12) and Mateusz Bieniek (12). The team had to do without Sam Deroo who suffered an ankle injury in the prior match of the team’s PlusLiga.

For the losing side, Filippo Lanza posted 21 points while Luca Vettori added another 20. Three other players recorded double-digit points in the loss – Uros Kovacevic (16), Eder Carbonera (11) and Jan Kozamernik (10).