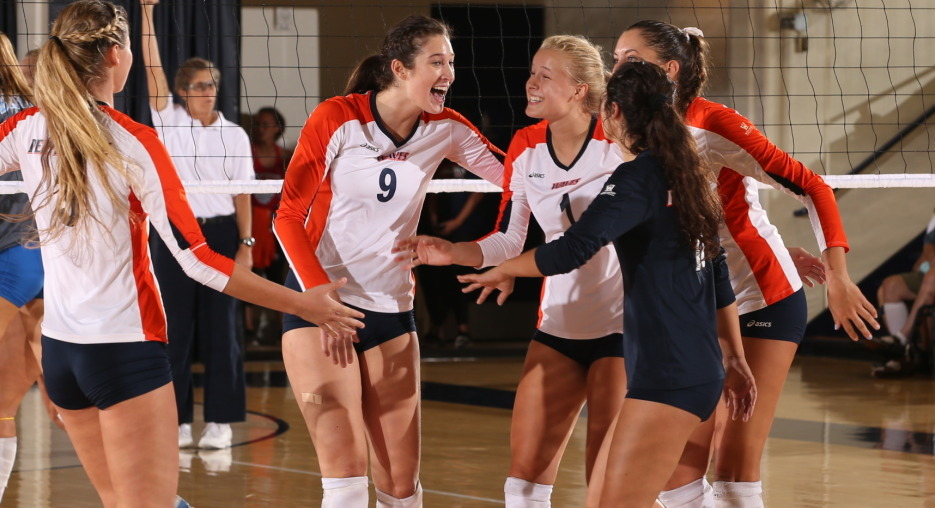 The Pepperdine women's volleyball team will have the final home match of the 2017-18 campaign on Saturday with a PCH Cup rival bout against Loyola Marymount in Firestone Fieldhouse.  Current Photo via Pepperdine Athletics

The Pepperdine women’s volleyball team will have the final home match of the 2017-18 campaign on Saturday with a PCH Cup rival bout against Loyola Marymount in Firestone Fieldhouse.  The match will stream live with Wavecasts on TheW.tv.

LIVE — The match will stream live on TheW.tv.  Direct links for all matches, including live statistics can be found on PepperdineWaves.com.

PCH CUP — An annual all-sport competition between two local rivals that are separated by just 19.1 miles of scenic coastline, the PCH Cup is in its eighth season of existence. Pepperdine won the first five cups.  A home win is worth one point, a road victory is worth 1.5 points. In the eight years since the cup first began, the Waves have won six-out-of-eight years, including the Waves 2015-16 win at 11.5 to 7.5.  Earlier this season, Pepperdine defeated LMU on the road with a 3-1 victory.

SENIOR DAY — Saturday’s match will mark Pepperdine women’s volleyball senior day.  Ashley Harris and Adria Johnson will be honored for their committment to the program prior to the national anthem and starting lineups before the match.

RECORD-BREAKING GROSS — Jasmine Gross broke the Pepperdine women’s volleyball all-time single season block record (including both sideout and rally scoring eras) with her 167th block of the season against Santa Clara on November 9.  That record has stood at 158 blocks since the 1991 and 1992 seasons when Lesli Asplund and Barbara Stross broke it in 111 and 109 sets respectively.

Gross also broke Pepperdine women’s volleyball program’s single season block record for the rally scoring era the Waves’ match against Gonzaga on November 4, a record she had set in her 2016 freshman campaign at 154 blocks last season.  Before 2016, the record stood at 143 blocks by Sophia Milo which happened in 2005.

Also, against San Francisco, Gross surpassed the Pepperdine women’s volleyball all-time record for best hitting percentage in a single-match after putting up 13 kills with no errors on 15 swings. The previous rally scoring record has stood at .833 (16-1-18) when Sophia Milo did it in 2005 against San Francisco. The sideout scoring record has stood at .857 when Barbara Blizzard did it against Saint Mary’s in 1988.  Last season, she overcame the most-blocks in a single match record with 15 against Portland on October 29, 2016.

Among individual ranks on the national charts, Jasmine Gross leads the Waves and conference by ranking 3rd nationally with 170 blocks and 7th with 1.55 blocks/set.  Gross and Hannah Frohling collectively rank nationally in 12-separate statistical categories.

NEWCOMER TALENT — Newcomers Blossom Sato and Alli O’Harra have made quite the impact this season.  Junior transfer Sato leads the team with 9.69 assists/set after putting up 688 assists.  She adds 0.27 kills/set, 0.23 aces/set, 2.97 digs/set and 0.27 blocks/set for the Waves.  Freshman O’Harra serves the Waves in the middle, posting 1.58 kills/set on a .240 success rate, along with 0.95 blocks/set.

LAST WEEK — The Waves split the team’s final long road trip of the season, falling to Santa Clara in four sets before sweeping San Francisco.  Against Santa Clara, the Waves posted 56 kills on a .139 success rate, while adding 53 assists, six aces, 99 digs and 14.0 blocks.  The opposition was good for 49 kills on a .097 hitting percentage, as well as 48 assists, six aces, 102 digs and 10.0 team blocks.  Hannah Frohling, Ashley Harris and Heidi Dyer hit for double-figure kills with Frohling leading the team with 19.  Jasmine Gross marked 11 blocks including two solo rejections to break the all-time Pepperdine women’s volleyball single-season block record.  Hana Lishman added a career-best 32 digs as well ranking third in the single-match Waves’ record books for most digs in a four-set match.

In the three-setter at USF, the Waves marked 46 smashes on an impressive .404 hitting percentage, while posting 39 assists, five aces, 45 digs and 6.0 team blocks.  Pepperdine allowed the Dons only 29 kills on a .101 output, as well as 28 assists, four aces, 40 digs and 2.0 team blocks.  Gross and Frohling led the offensive with 13 and 11 kills respectively.  Gross’ 13 kills with no errors on 15 swings earned her a new record.  The .867 hitting percentage ranks atop the all-time women’s volleyball record books for highest hitting percentage in a single match.  Blossom Sato dished out 38 of the Waves’ 39 total assists and Lishman led with 13 digs.

THE COMPETITION — Pepperdine leads Loyola Marymount all-time with a 54-23 overall record, including the 3-1 win in Los Angeles to kick of West Coast Conference action this season.  The team’s first faced off in 1976 when the Waves won the first three, including two by straight-set decisions.  Pepperdine then went on a few winning-streaks including seven-consecutive wins from 1984-85, 10 from 1987-91, six from 2001-03 and 12 from 2006-12.  This season’s win was the first time Pepperdine defeated LMU since the 2015 season.

SNAPCHAT FAMOUS — The NCAA rolled out a new initiative highlighting a day in the life of a student-athlete on Snapchat for the first time on the Waves’ game day with Long Beach State. Pepperdine, with Hannah Frohling at the helm, took over the controls of @ncaasports Snapchat on September 12 and showed the masses what it is to be a student-athlete in Malibu.

HEIDI DYER, THE TITANIUM WOMAN — Junior Heidi Dyer had an interesting road to NCAA Division I athletics and AVCA Beach All-American status.  When she was 12, a major scoliosis curve of over 60 percent forced her to get corrective surgery.  She had two titanium rods fused to her spine to keep her back straight.  Despite her parents being told she would never play volleyball again and may never walk again, she defied all odds and became one of Pepperdine beach and indoor volleyball student-athletes.  During the NCAA Beach Volleyball National Championships last season, TurnerSports and NCAA.com did a feature piece on her that streamed throughout the NCAA tournament and aired on TBS.  It was voted one of the top-10 features on NCAA.com last season.

SATO NATION — Junior Blossom Sato comes from the very well-known Sato volleyball dynasty.  Her mother Liane was a member of the US Women’s National Team in 1988 and 1992 when the team captured the Olympic Games bronze medal.  She now coaches Santa Monica High School.  Her uncles Eric and Gary were also standouts in the sport, playing or coaching alongside legendary Pepperdine men’s volleyball coach Marv Dunphy for Team USA when the squad won the gold in 1988.  Eric was a member of the 1988 US Men’s National Team that claimed gold and the 1992 squad that earned bronze.  Gary, who is now an assistant for USC, served as the United States’ Head Coach for the 1985 FIVB World Cup gold medal finish and served as an assistant for the US Men’s National Team from 1984-88, 1992 and 2009-12.

GROSS’ IN COLLEGE ATHLETICS — Sophomore Jasmine Gross is the daughter of Aaron Gross and Susan Campbell, who both are the head coaches of West Coast Conference competitors University of Portland men’s and women’s tennis teams respectively.