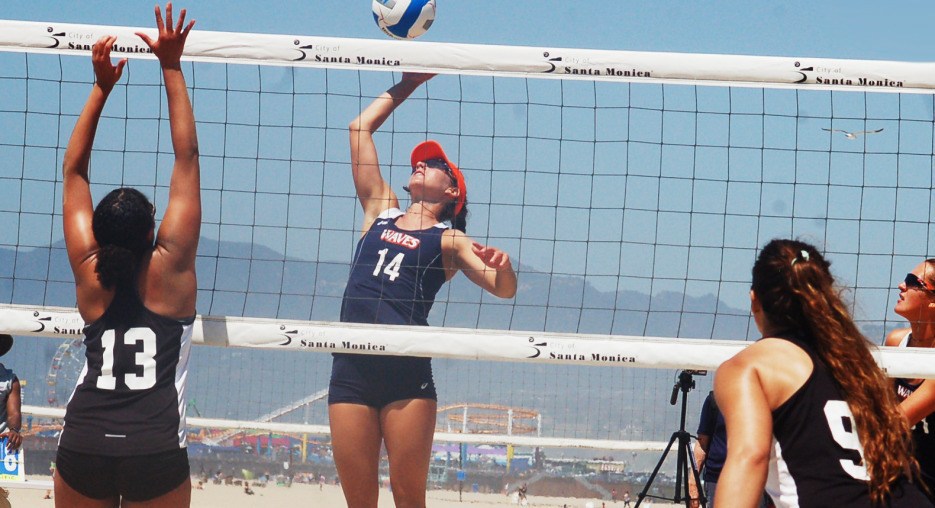 Pepperdine's No. 4 pair is atop Pool B after winning both of its matches at the USA Volleyball College Pairs Championship on Thursday. Archive Photo via Pepperdine Athletics

The USA Volleyball Collegiate Beach Championships are underway. The 24 women’s teams have been divided into six pools, A through F. The top two teams in each pool advance as well as the highest four of the third-place pool finishers, based on their point ratios.

In Pool B action, Pepperdine’s Anika Wilson and Deahna Kraft sit atop the group after squeaking out a pair of three-set wins over Loyola Marymount’s Sarah Sponcil and Savannah Slattery and TCU’s Amy Neal and Jaelyn Greene. Wilson and Kraft won the first set of both contests, and came back strong in the third.

In the other two matches, Sponcil/Slattery and Neal/Greene defeated Florida Atlantic’s Megan Rice and Jessalyn Kinlaw.

Remaining on the slate for Friday, Rice and Kinlaw face Wilson/Kraft, while Sponcil/Slattery finish out round-robin play against Neal/Greene.

Wilson and Kraft were Pepperdine’s No. 4 duo and posted a 22-5 mark in 2017, including a 3-0 record in the West Coast Conference Championships. Sponcil and Slattery were the West Coast Conference’s Player and Freshman of the Year respectively and went 20-9 as a duo in 2017. Greene and Neal went 21-5 in 2017 and finished the season with 12 wins in their last 13 matches. Rice/Kinlaw were FAU’s top pair, going 22-7 this year.