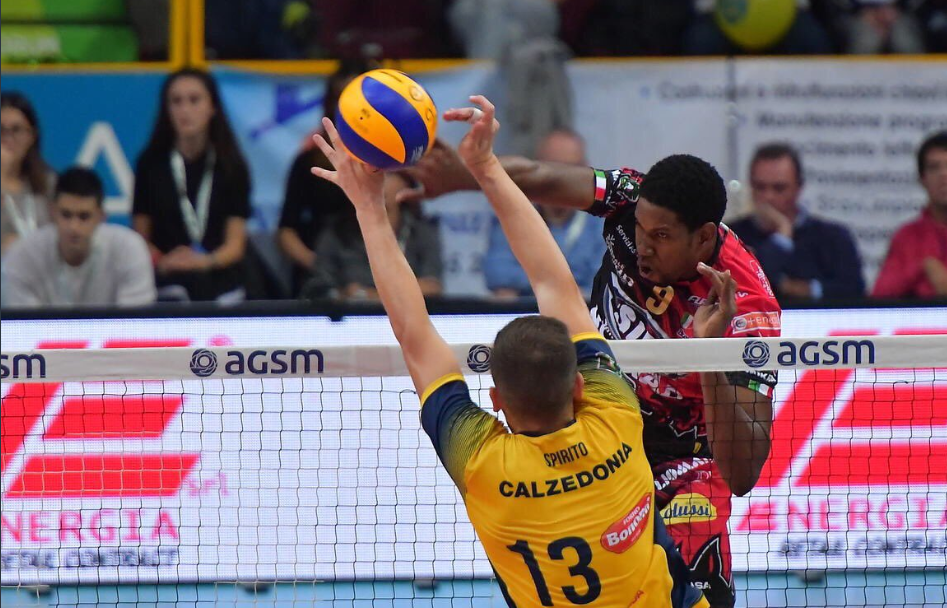 Wilfredo Leon led Perugia with 11 kills and a match-high 5 aces in Perugia's sweep over Verona.  Current Photo via VolleyFoto.it

Luciano DeCecco has started to show people how he can fully utilize two of the most productive pin-hitters in the world. Aleksandar Atansijevic has been used to getting the majority of his team’s sets. This has been the case at Perugia and Serbia. He traditionally scores large numbers of points with a large volume of attempts, but efficiency is not one of his stack characteristics. Wilfredo Leon is simply the best player in the world. His length and athleticism allow him to score from the net and service line with a prowess that is unmatched. DeCecco was able to give each of these superstars an equal amount of sets on Saturday, and the results were phenomenal (.417/57% attack average).

Atanasijevic scored 16 points on 1o kills, 3 blocks, and 3 service aces. He hit .333 (56%) with 4 errors from the right side. Leon also scored 16 points. While he did not register a block, he put away 11 kills and 5 service aces. Leon led his team with 44% of his receptions being rated as positive . He also posted a .473 (58%) attack average with 2 attack errors. Those two combined for 8 of Perugia’s 9 aces. The team only committed 8 errors on their way to 9 aces. Filippo Lanza scored 7 points from the other outside hitter position. He scored on 6 kills and a block with a .167 (33%) hitting percentage.

One of the real benefits from having a pair of strong outside attackers at each pin who receive equitable distribution is the opening up of the attack through the middle. DeCecco only set the middle blockers a total of 10 times, but they had a 100% (1.000) success rate in attack. Both Marko Podrascanin and Fabio Ricci were a perfect 5 for 5 in attack. Podrascanin added 5 blocks and an ace to finish with with 11 points. Ricci added a block to his point total. Jonah Seif was used as a substitute in the first and third sets. He scored 1 point on a kill.

Verona was led by Stephen Boyer and his 13 points. His points came on 11 kills, 1 block, and 1 ace, though his rate of attack was not very high. His 11 points came with 7 errors and a .133 (37%) hitting percentage. Sebastian Solè was the next-highest scorer with 6 points on 5 kills and an ace. Cristian Savani only started in the last set and scored 1 point on a kill, but he hit .000 (13%) on 8 attempts. Luca Spirito only set Verona to a .143 (36%) hitting percentage in the defeat.