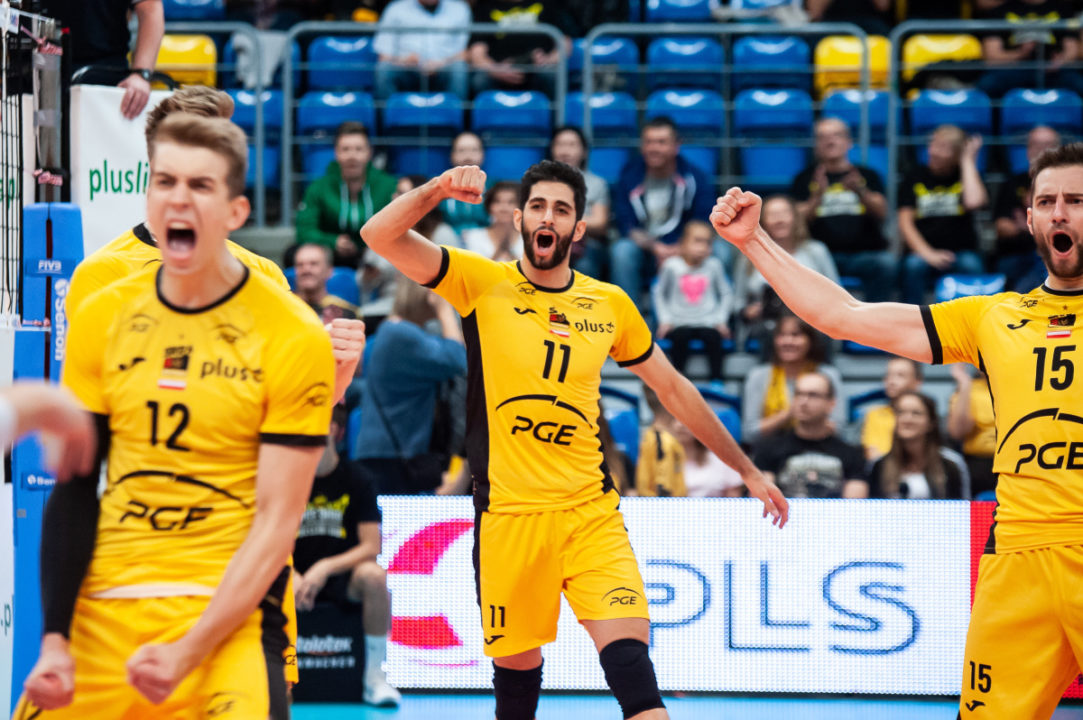 Milad Ebadipour was the MVP in the tiebreak win over Trefl Gdańsk.  Current Photo via Polish PlusLiga

While both of these teams will square off again on Wednesday, October 24 in the Polish Super Cup, they faced each other with PlusLiga points on Saturday. The winner of last year’s PlusLiga, Skra, outlasted the current holders of the Polish Cup, Gdańsk. Statistically both teams were quite even, though Skra held a slight advantage in passes rated perfect (19% to 16%).

Milad Ebadipour led the Polish Champsions with 14 points, including a team-high 3 points in the tie-break. Ebadipour scored on 13 kills and 1 block while hitting .521 (57%). The Iranian outside hitter only committed 1 hitting error from the left. As with their match against MKS Będzin, Skra started Renee Teppan at opposite. He scored 4 points, but only hit -.071 (21%). Mariusz Mlazly started the last 3 sets and finished the match with 12 points on 9 kills, 1 block, and 2 aces. Wlazly was also not the most efficient in attack, hitting only .136 (41%) with 6 attack errors.

Jakub Kochanowski continued his impressive run of form in the middle with 8 kills and a match-high 4 blocks. Kochanowski went without committing an attack error on his way to posting a .727 (73%) attack average. Milan Katic only scored 7 points on the outside, but he led the team in passing with 56% of his receptions being rated as positive and 28% of his passes being perfect.

Maciej Muzaj led Trefl Gdańsk with 17 points from 15 kills and 2 blocks, but he struggled with attack efficiency. The opposite committed 9 attack errors and only hit .162 (41%). Ruben Schott scored 11 points on 10 kills and an ace while hitting .217 (43%) as an outside hitter. Nikola Mijailovic scored 13 points from the other outside hitter position on 12 kills and 1 block. Mijailovic only hit .241 (41%) with 5 attack errors.

Patric Niemiec hit 8 kills on 12 attempts with 2 errors on his way to 12 points. Niemiec also added 3 blocks and an ace. Maciej Olendererk led Gdańsk in passing from the libero position with 65% positive receptions and 25% being rated as perfect.