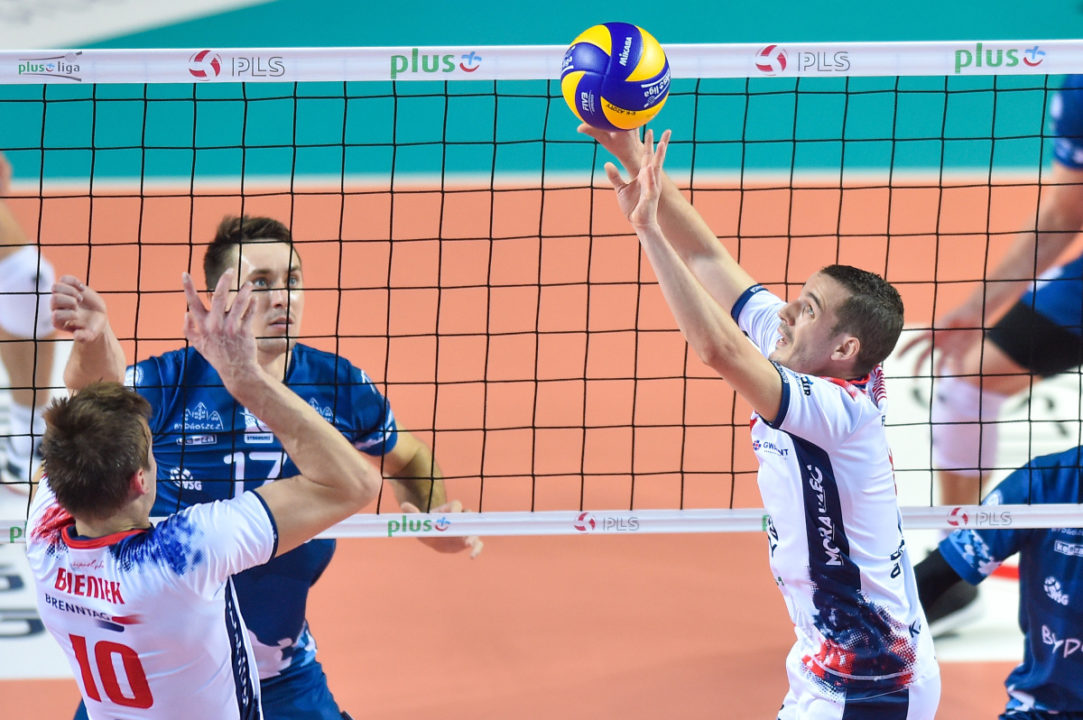 Benjamin Toniutti has faced a few disappointments in the past 6 months. Last year’s ZAKSA team went 0-2 in the Champions League Final Four and they were upset by PGE Skra Belchatow in the finals of the Polish PlusLiga. His French National Team was beat handily by Russia in the finals of the FIVB Volleyball Nations League, and then they did not qualify for the Final Six at the FIVB World Championships.

Coming up short on those stages has seemed to fuel his determination at the start of this season with ZAKSA. He has orchestrated 3 wins, including setting his team to a .377 (49%) attack average on Wednesday against Stocznia Szczecin. He continued his strong form on Friday against previously unbeaten Chemik Bydgoszcz, a team who opened the season with a win against PGE Skra Belchatow.  Toniutti set ZAKSA to a blistering .544 (62%) hitting percentage and had double-digit production from 4 of his 5 attacking players in the sweep.

Sam Deroo led the way for ZAKSA with 14 points on 10 kills, 1 block, and a match-high 3 aces. Deroo was impressive with a .444 (53%) hitting percentage from the outside. The other outside hitter, Aleksandar Sliwka, put 10 points on the stat page from 9 kills and a block with a .500 (56%) hitting percentage. Lukasz Kaczmarek registered 8 kills, 1 block, and 1 ace as an opposite on the right side.

Mateusz Bienek also reached the double digits with 10 points in the middle. He tied a match-high 2 kills, with 8 kills. His 8 kills came on 8 attempts for a perfect 1.000 (100%) attack efficiency. Lukasz Wisniewski scored 9 points from the other middle blocker position. He scored on 5 kills, 2 blocks, and 2 aces. As with with Bienek, Wisniewski hit a perfect 1.000 (100%) without committing an attack error.

Bydgoszcz just couldn’t get anything started. Bartosz Filipiak scored 10 points on 10 kills at opposite. Pawel Gryc did not start at outside hitter, but came off the bench in the first set. He scored 10 points from 9 kills and 1 block. That was the only block for Bydgoszcz all match. They also only registered ace as well.

Bienek said of the match, “From the beginning to the end we controlled the game. Our game is very nice. Chemik Bydgoszcz showed in earlier matches that they can break points with stronger teams. From the very beginning we were focused and we did not let them break the points on Friday.”

Indykpol AZS Olsztyn finally put a number in the win column with the sweep over win-less MKS Będzin. Jan Hadrava led the match with 20 points on 18 kills, 1 block, and 1 ace. Olsztyn got 11 points from both of their outside hitters: Marcel Lux and Serhiy Kapellus. Both of them scored on 10 kills and 1 ace. Milosz Znizscol finished with 10 points in the middle on 6 kills, 3 blocks, and 1 ace. Their setter, Sebastian Warda, also contributed 3 blocks, and he set the team to a .347 (49%) hitting percentage.

Lincoln Williams led MKS Będzin with 12 points entirely from kills and hit .259. (44%). Jake Langlois led his team last match against PGE Skra Belchatow, but has a rough outing on Saturday. He started the match, but was pulled in the first set after earning only 1 kill on 10 attempts with a -.200 (10%) attack efficiency. No other player for MKS Będzin scored in the double digits.