Player of the Year VanLiew of FGCU Headlines ASUN Honors 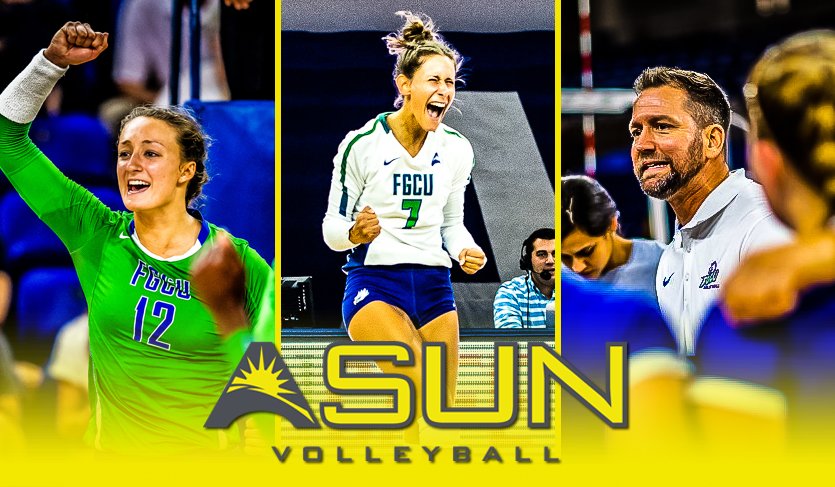 FGCU's Cortney VanLiew was named an unanimous selection for Player of the Year, while Dana Axner claimed both Freshman and Defensive Player of the year. Head Coach Matt Botsford earned Coach of the Year accolades.  Current Photo via Atlantic Sun Conference

ATLANTA – ASUN Conference Volleyball Regular Season Champions, FGCU, claimed four of the five league’s top honors on Wednesday night at the annual awards banquet. FGCU’s Cortney VanLiew was named an unanimous selection for Player of the Year, while Dana Axner claimed both Freshman and Defensive Player of the year. Head Coach Matt Botsford earned Coach of the Year after guiding the Eagles to a 15-1 conference record and their first ASUN Regular Season Title since 2012.

VanLiew becomes the second FGCU player in a row to garner Player of the Year, as teammate Amanda Carroll shared the honor in 2017. The Seymour, Ind. native led the ASUN this season in kills with 416, which ranked in the top-40 nationally. VanLiew finished second in the league in kills/set with an average of 4.00, just .03 off of the top spot. She recorded four 20-kill games this season, including a 20-kill performance in a win over Miami and a career-high 29 against West Virginia. In a late-season stretch, which helped FGCU clinch the regular season crown, VanLiew came up with an 18-kill match against Lipscomb and another 18-kill performance in a road win against Kennesaw State.

Axner is the first player in ASUN history to both Freshman and Defensive Player of the Year in the same season. She also gives FGCU the Freshman of the Year for the third time in the last four years, as teammates Carroll won the honor in 2015 and Snowy Burnam earned it last season. Axner broke the ASUN record for most Freshman of the Week awards with six this season. This season, she led the ASUN in digs with 536, which ranked in the top-40 nationally. She broke several FGCU records this season, including the single-match record with 39 digs vs. West Virginia and program record for three-set match with 28 digs against Stetson.

For the second-straight season, the Setter of the Year hails from Kennesaw State as Lexi Broadwater earns the honor following Kristi Piedimonte. The Owls’ setter led the ASUN in assists and assists/set with marks of 1,245 and 11.32. Those number ranked fourth and 15th nationally. Broadwater also helped quarterback an offense that led the ASUN in kills and ranked second in kills/set and hitting percentage.

For the first time in his career, Matt Botsford of FGCU is the ASUN Coach of the Year. He guided the Eagles to their first ASUN Regular Season Title for the first time since 2012. The Eagles finished the regular season with a record of 24-6 and an ASUN record of 15-1.