K-State Rallies for 5-Set Win Over Kansas, First Series Sweep of Jayhawks since 2011 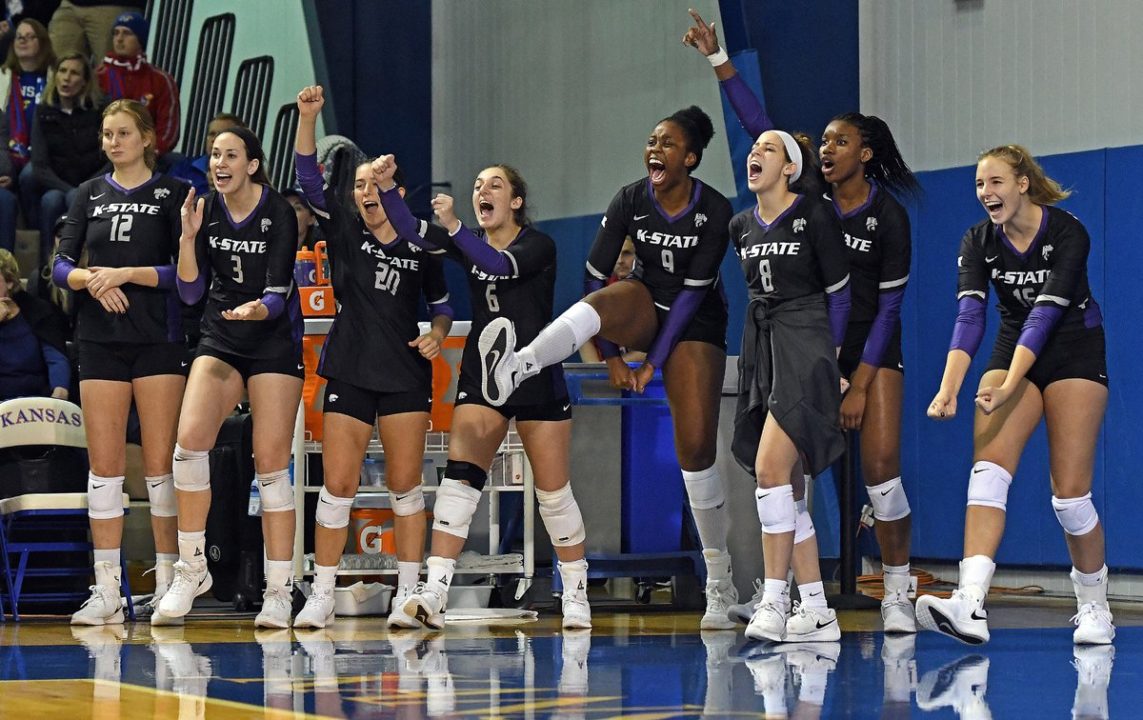 Fueled by 17 kills from Brooke Heyne and 15 more from Kylee Zumach, K-State rallied from a two-set deficit to win in five sets over Kansas in the Dillons Sunflower Showdown Wednesday night. Current Photo via Kansas State Athletics

CATS WIN! CATS WIN!!#KStateVB comes back from two sets down to take the #SunflowerShowdown!! The Cats first season sweep of KU since 2011 and first win when trailing 0-2 since 2014!

“We felt like if we could just level out a little bit, maybe minimize our errors, that we would be fine,” head coach Suzie Fritz said after the match. “I did not think that we were playing consistently well in the first two sets. Serve started coming around and pass started coming together and we were pretty good in some of the long rallies. We were playing pretty good volleyball by the time we settled in.”

K-State produced a higher hitting efficiency in four of the five sets and held a .298-.191 edge in the category by night’s end.

“It was so cool,” Zumach said of winning in her final trip to Lawrence. “They’re obviously a fantastic team and this gym is always so loud, so being able to overcome that 0-2 deficit, that just meant everything to us.

“I was just like ‘you know what, this is my last time playing in the Sunflower Showdown. I’ve been here five years, so it’s now or never.'”

Zumach, who came off the bench late in the second set, put down five kills on seven swings in the final set to cap the Wildcats’ comeback. The redshirt senior outside hitter also produced five kills in the third set, a resounding 25-12 win, and hit .394 to lead K-State.

“It’s been an up-and-down year for her,” said Fritz of Zumach. “She was unbelievable at the beginning of the year and hit a slump. I thought she was very creative as an attacker tonight. She deserved a good night, it’s been a long time coming. We needed her to do that, and she needed to do that. I’m just really proud of her.”

Heyne’s 17 kills were a career-best output, as she had just three errors in hitting .311. The redshirt freshman added eight digs and two blocks assists.

“Heyne is such a creative attacker,” Fritz said. “She does some things sometimes that blow my mind, how she can create something out of nothing.”

A total of four Wildcats were in double-figure kills, as junior middle blocker Elle Sandbothe had a career-high 13 and freshman Gloria Mutiri finished with 11. Sandbothe had a match-high seven blocks assists while Mutiri added five.

Setter Sarah Dixon‘s 59 assists, a career high, helped the Cats produce a .298 team hitting percentage. The redshirt junior also picked up 10 digs for her ninth double-double of the season and 20th of her career.

Finding itself in an early seven-point hole in the first set, the Cats clawed back to within a point behind a 7-1 run. Late in the set, K-State was again within a single point late at 21-20, only to see the Jayhawks close by tallying four of the final six. Heyne led the Wildcats with five kills while Mutiri and Sandbothe each had five. Both sides were held under .200, as K-State registered four team blocks.

Again, K-State nearly erased an eight-point deficit after falling behind 11-3, as KU recorded nine kills on its first nine attacks of the game. After Heyne’s seventh kill of the night, the Cats trailed 24-23 before Ashley Smith ended the comeback bid with her seventh kill. The Jayhawks hit .441 behind 18 kills in taking a 2-0 match lead.

Down two sets, K-State responded with a 25-12 win in Set 3, never trailing after opening an 8-3 lead following a five-point scoring run and closing on an 8-2 burst. The Cats limited KU to eight kills while forcing eight errors for a .000 hitting efficiency while hitting .324.

Set 4 saw the Jayhawks tally more kills (16) than the Wildcats (13), but thanks to four team blocks, K-State hit .333 compared to KU’s .220. Heyne, Zumach and Peyton Williams each picked up three kills in a wire-to-wire set victory.

The Cats hit .417 in picking up a dozen kills in the decisive game, four added by Heyne on six attacks. K-State led by seven at 11-4 following a six-point run and Mutiri’s 11th kill ended the match.
The Jayhawks were led by Rachel Langs and Ashley Smith, who each picked up 14 kills. Langs hit .591 to go with seven total blocks.

Senior Night is up next for the Cats, as they will honor their six-member senior class after Saturday’s -match against Texas Tech at Ahearn Field House. First serve vs. the Red Raiders is set for 8 p.m., and will air on ESPN3 and stream live on the ESPN app. Rob Voelker will also be on the call on New Radio KMAN (93.3 FM, 1350 AM) with free, live audio streaming on K-StateSports.com/watch.

With Kansas leading by as many as seven at multiple points throughout the opening set, K-State battled back to narrow the KU margin to one with a 6-0 run that forced a Jayhawk timeout. The Jayhawks and Wildcats continued back and forth until Rachel Langs kill secured the first set victory, 25-22.

KU’s second set followed in similar fashion with the Jayhawks holding as large as an eight-point advantage after starting the set on an 11-2 run. However, the Wildcats didn’t go away and were able to fight their way back to within one, 24-23, before an Ashley Smith kill gave Kansas the win to head into the third set with a 2-0 advantage.

Set three began with the instate rivals trading off runs. The Jayhawks matched K-State’s 3-0 run to start the set, evening the score at 3-3, but the Wildcats put up five unanswered points to force a Kansas timeout. Despite their best efforts, KU couldn’t stop the K-State offense as the Wildcats went on to win the third set, 25-12.

The fourth set continued in favor of the Wildcats with K-State scoring the first points for the fourth-straight set. K-State led for the entire set, but Kansas was able to rally to within three before the Wildcats evened the match at two-sets each.

With 18 errors in the final three sets, Kansas couldn’t compete with the Wildcats .298 hitting percentage and fell 3-2 to K-State.

Senior Gabby Simpson tallied her 70th-career ace in the opening set, while notching double-figure assists for the 16th time this season with 46 total assists on the night. Simpson earned her first triple-double as a Jayhawk, finishing with 10 kills, 46 assists and 14 digs. Freshman Rachel Langs also had a career-night with 14 kills in the Jayhawks 3-2 loss.

UP NEXT
The Jayhawks head to TCU for the first match up a two-match road trip. Kansas faces off with the Horned Frogs on Saturday, Nov. 17 at 1 p.m. Fans can watch the game on Fox Sports Southwest/Fox Sports Go app or listen on the Jayhawk Radio Network.