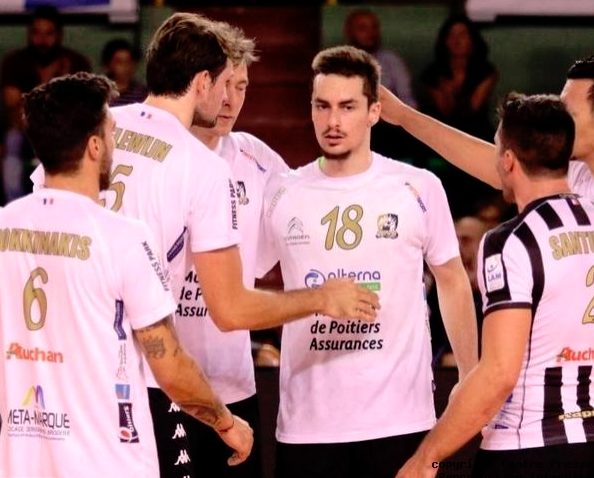 Poitiers got an upset win over Chaumont to start the season.  Current Photo via Stade Poiteven

Replacing Stephen Boyer is a Herculean task, but Chaumont seemed to have found an answer in Wassim Ben Tara. They opened the season with a victory over Viking TIF in the Champions League. They faced stiffer competition in the first match of the French Ligue A. Their first match against Jochen Schops and Poitiers proved to be too much for the French vice-champions to handle. Schops, a German opposite who has won a Champions League with VfB Friedrichshafen and the Polish PlusLiga with Asseco Resovia, showed his experience in the win.

Schops led all scorers with 22 points on 19 kills, 2 blocks, and 1 ace. He also hit .470 (56%) in quite an efficient outing. Zouheir El Graoui handled most of the passing duties in serve receive and led the team with 41% of his receptions being deemed perfect. He also scored 19 points on 16 kills, 2 blocks, and 1 ace with an astounding .608 (70%) hitting percentage from the left side. Menelaos Kokkinakis scored 14 points and passed 67% of his service reception attempts positively. Konstatin Abaev got 14 points from the middle blockers: 9 from Thomas Koelewijn and 5 from Marc Zopie. Abaev set Poitiers to a .409 (55%) attack average in the win.

Taylor Averill, fresh off of a bronze medal win at the FIVB World Championships, made his debut at his new club team after playing in Milan last season. He was on the bench for their Champions League match last week, but broke into the starting lineup on Saturday. Averill scored 8 points on 5 kills, 2 blocks, 1 ace, and he posted a .364 (45%) hitting percentage in the middle. Wassim Ben Tara had a rough outing at opposite. He scored 4 points on 4 kills in the first set but also committed 4 errors, and he was replaced by Julien Winklemuller. The reserve opposite scored 11 points on 11 kills.

Matej Patek led Chaumont with 15 points on 15 kills with a .538 (58%) hitting percentage from the outside hitter position. Baptiste Geiler started opposite of Patek and registered 8 points in the loss. Blair Bann led Chaumont in serve receive with 80% of his passes being rated as positive and 50% being declared perfect. Michael Saeta set Chaumont to a .362 (48%) attack average on the night.

Vasyl Tupchii didn’t old anything back in Sete’s opening match against Ajaccio. The starting oposite led the team with 22 points, but his 20 kills also came with 11 attack errors and a .231 (51%) attack average. The dip in efficiency was not much of a setback for Sete, as Arthur Piazzeta set his team to a .370 (56%) hitting percentage overall. Elviss Krastins and Branimir Grozdanov both scored 14 points from the outside hitter position. Daryl Butor registered 11 points in the middle on 6 kills, 2 blocks, and 3 aces. Arthur Swzarc scored 6 points in the middle from 2 kills, 2 blocks, and 2 aces.