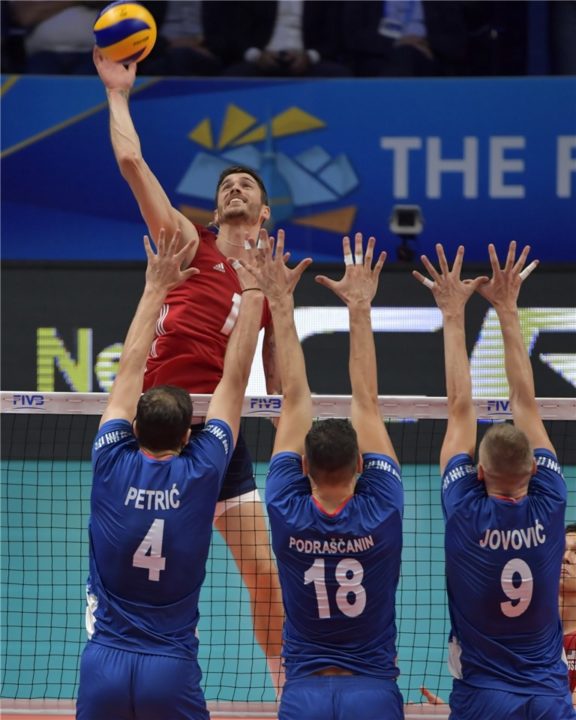 Matt Anderson led the USA to bronze with 29 points against Serbia. Current Photo via FIVB

The United States picked up its second bronze medal of the 2018 international season by beating Serbia 3-1 in front of over 12,000 fans. The United States seemed like they good be distined to miss out on the podium after dropping the first set in a 25-23 manner. After losing Saturday’s semifinal against Poland in a tie-break, it would be tough to emotionally bounce back.

The Americans were able to turn around their performance to win the second set emphatically. Nikola Grbic, head coach of Serbia, stated that, “the third set was decisive.” Matt Anderson Came through with some timely kills to claim a 32-30 win and give the USA a 2-1 advantage. The United States was able to close out the match and avoid another tie-break.

Matt Anderson was the man of the match for the United States. Playing his last match at opposite befor heading back to Zenit Kazan where he will play outside hitter, Anderson led the match with 29 points. He put away 23 kills, 2 blocks, and 4 service aces. His former teammate at Penn State University, Max Holt, led the match with 5 aces. He also contributed 8 kills and block.

Dan McDonnell got the start opposite of Holt but was replaced by Dave Smith, in the first set. Smith scored 11 points on 8 kills and 3 blocks. He hit 67% without committing an attack error.

Aaron Russell chipped in 16 points on 14 kills, 1 block, and 1 ace. Despite 14 kills, he had a tough night in attack, hitting only 34% with 8 attack errors. Taylor Sander finished the match with 9 points on 8 kills and 1 block. He hit 67% with only 1 attack error. Sander led he match with 52% of his passes being perfect. Micah Christenson set the USA to a 52% attack efficiency.

Drazen Luburic led Serbia with 12 points, though he only started the last set in place of Aleksandar Atanasijevic. Luburic finished with 11 kills and 1 block. Atanasijevic scored 7 points on 7 kills, but he also committed 7 errors. He posted a 32% attack average. Marko Ivovic scored 11 points on 8 kills, 2 aces, and 1 block. Nemanja Petric posted 10 points from 7 kills and a team-high 3 blocks.

Serbia got 13 points combined out of their middle blockers. Marko Podrascanin finished with 8 points, and Srecko Lisinac scored 5. Nikola Jovovic set Serbia to a 42% hitting percentage in the defeat.