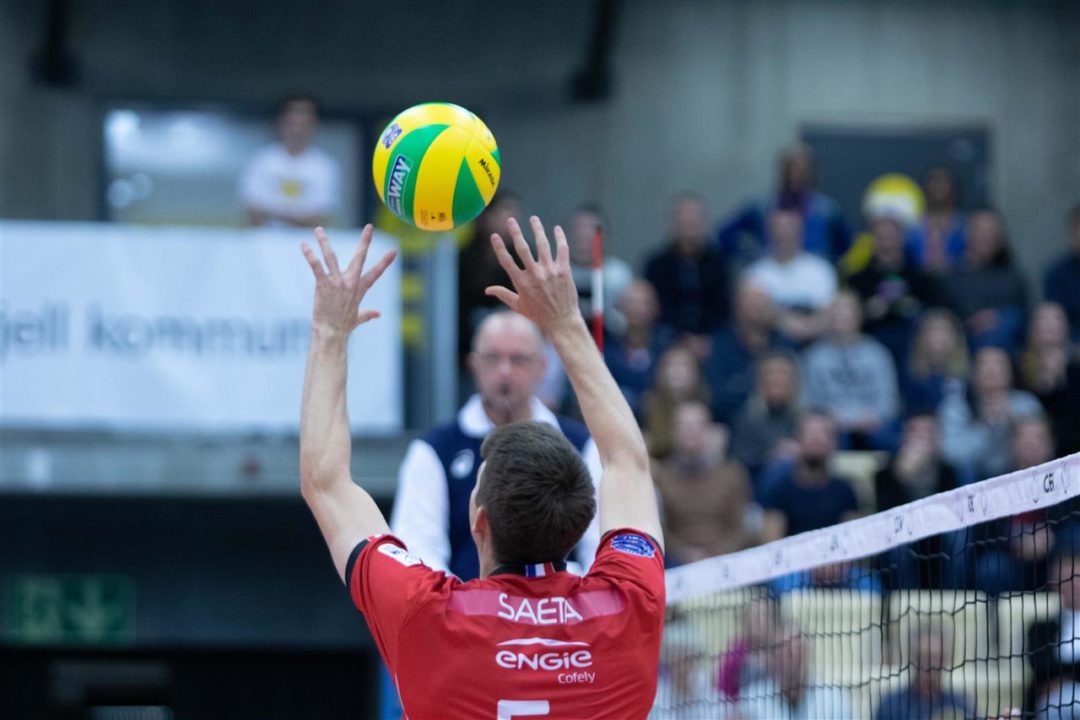 In the first match since Stephen Boyer left the club, Chaumont got big nights from Wasim Ben Tara and Matej Patak in their 3-0 over the Norwegian club making their CEV Champions League debut. Chaumont passed, served, and attacked considerably better than their opponents in the match that just lasted a bit longer than an hour.

Michael Saeta, formerly of UC Irvine, set Chaumont to a 51% attack average. That matched up quite favorably to the his opponent’s 42% success rate in attack. Ben Tara, the replacement for Boyer at opposite, led the way with 17 points on 15 kills, 1 block, and 1 service ace. He had an attack average of 50% but was blocked 5 times with a .333 hitting percentage. Patak hit .500 (55%) from the outside hitter position with 11 kills, 2 blocks, and 1 ace to finish with 14 points.

Kevin Rodriguez led the team in the middle with 8 points. He put away 4 kills and posted a match-high 4 blocks. Blair Bann, the new libero for the French vice-champions, led the match with 80% of his passes being rated as positive, with 60% being noted as excellent.

Kristian Bjelland and Vetle Hylland were the only players for Viking to reach double-digit points. Bjelland, an outside hitter scored 13 points on 12 kills and 1 block. He also hit 46% (.385) in the defeat with 2 attack errors. Hylland, the opposite, scored 14 points on 13 kills and a block with a 43% (.267) hitting percentage.

Chaumont needs to win or lose in 5 sets when the teams play again in France on October 17th to move on to the 2nd Round. Viking needs to win in 3 or 4 sets in order to force a Golden Set to 15 points.

Andres Villena led Teurel with 16 points on 15 kills and 1 block. The opposite hit .523 (71%) in the sweep. Thomas Enrique Ereu Satander scored 13 points from 12 kills and an ace. The outside hitter hit .667 (67%) and did not commit a single attack error. He was also the leading passer with 75% of his receptions being rated as positive and 67% being classified as excellent. Pedro Rangel, middle blocker from Mexico, scored 6 points on 3 kills, 2 blocks and 1 ace.

Patryk Strzezek was the only player for Lindemans Aalst who scored in the double digits. His 11 points came on 10 kills and 1 ace, though he only hit .181 (42%) with 6 attack errors. Janusz Gorski and Adrian Staszewski scored 8 and 5 points from the outside hitter position respectively. Martjin Colson led his team from the middle with 7 points, while Tim Smit chipped in 5.

Lindemans Aalst has it all lef tot do in the return leg. They must win in 3 or 4 sets to force the Golden Set. A loss or a win in 5 sets will see Teurel advancing to the 2nd Round.