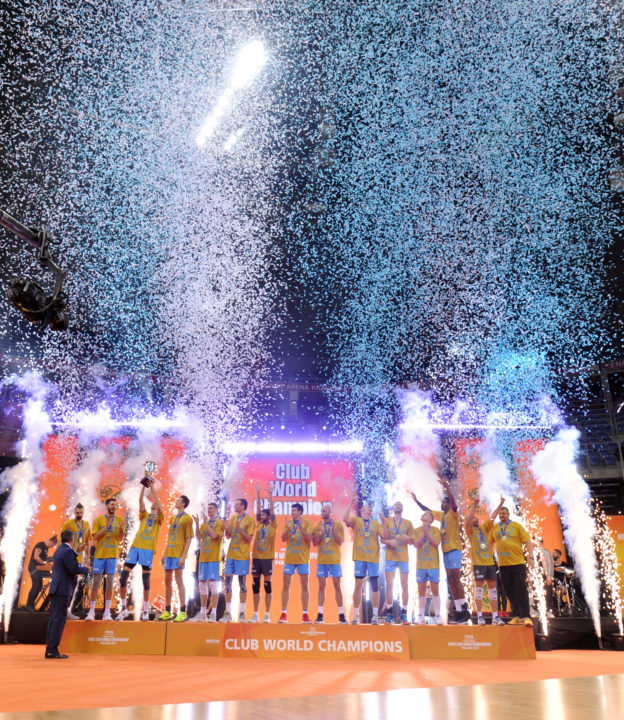 Poland (2017 champions Zenit Kazan above) will host the men's championship for the 2nd-straight year, while China will host the first of at least 2 consecutive years. Archive Photo via FIVB

Completing their transition from an end-of-season event to a mid-season international cup, the 2018 FIVB Club World Championships will take place in November and December this year. The move won’t be popular with European teams especially, who also have Champions League commitments mid-season, but does ensure the highest quality of mid-season form. With a World Championship this summer, a season-opening tournament became nearly-impossible, with the women’s World Championship not ending until October 20th.

This is the first of two years in which the women’s championship will be held in China. Turkish teams have won each of the last 3 titles and 4 of the last 5.

Vakifbank Istanbul won their 2nd women’s title last year playing in Kobe, Japan, while Russian side Zenit Kazan won their first men’s title last year in Poland. Zenit will qualify for the 2018 tournament again as Russian champions, but without Wilfredo Leon by the time the tournament arrives, the team will look very different than it does now at the end of the 2017-2018 season.

The table below outlines the different timings of the event this decade.

Traditionally, the host nation receives the right to invite 2 teams of its choosing (which almost always includes the runner-up from the domestic league). Then, on the men’s side the tournament is filled out with the most recent national champions from the FIVB top-ranked countries that are not yet already qualified. Last year, that meant the champions of Italy and Argentina. In the women’s tournament, there are simply 4 wild cards that can be pulled from any nation (done this way because the strongest nations in women’s club volleyball aren’t always at-or-near the top of the FIVB international rankings, such as Switzerland).

Camponesa/Minas is the first likely invitee in the women’s tournament as the South American Champions – their first such title. That team has never before participated in the Club World Championships.