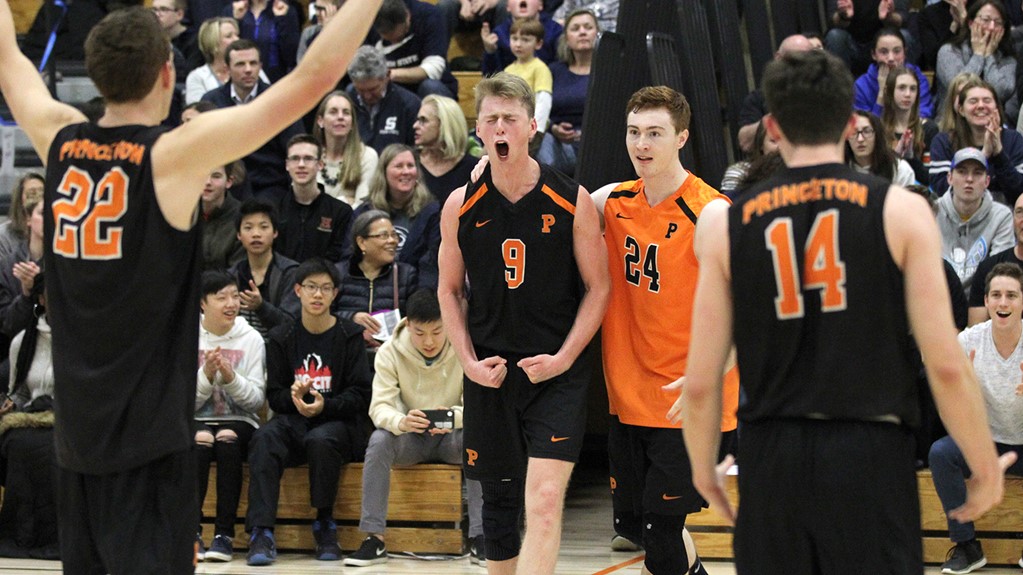 In the process, Princeton locked-up the 4th and final spot in the 2018 EIVA Championship tournament. Current Photo via Beverly Schaefer/Princeton Athletics

Friday night’s win over Penn State on the road in the Happy Valley couldn’t have been more significant for the Princeton Tigers. For starters, it clinched the 4th-and-final spot in the 2018 EIVA tournament, which keeps their chance at the NCAA tournament (which will only come via an EIVA tournament title) alive.

Zooming out, though, this match was also a historic one in a big in-state men’s volleyball rivalry. It broke a 32-match road winning streak to Penn State, and became the first time Princeton has had back-to-back wins over Penn State since 1998, which was the last time Princeton won the EIVA title.

“I couldn’t be prouder of the way the guys competed tonight,” Princeton head coach Sam Shweisky said. “There was a focus and attention to detail that was there from the first serve to the last one, and it shows what this team is capable of on the eve of the EIVA postseason. I give a ton of credit to our senior leaders, who helped get us through some tough times and capitalized on the opportunity tonight. Junior Oboh gave us four kills, four blocks and four digs, while Mike Fuerst had a huge momentum ace late in the first set to give us the lead.”

The win spoiled the return-from-injury of Penn State sophomore Calvin Mende, who had missed the last 2 matches. He had 6 kills on 17 swings.

But a hot-hitting Princeton offense, combined with a ruthless block, overwhelmed Penn State. The Tigers had just 7 errors in the whole match while hitting .421. They also recorded 10 team blocks in 3 sets (to just 3.5 for Penn State).

Princeton settled in to what will likely be their tournament rotation, using the same 7 players (6 starters plus a libero) for the entirety of the match. They usually have an 8-or-9 man rotation, still relatively tight, but over the last few weeks have been ratcheting that down. Friday’s match didn’t see any court time for freshman defensive specialist Cade Keegan, who has been used in the back-row for spells this season (including a 17-dig performance in February against Charleston).

George Huhmann starred for Princeton, scoring 19 kills – tied for the 5th-best single-game output in the country in a 3-set match this season. He did so in just 32 attacks, for a .531 hitting percentage. That was part of an overall .421 hitting percentage. That’s the first time this season that Penn State has hit over .421 this season. He also added 3 digs and 3 block assists. Junior Oboh chipped in 4 block assists and 1 solo block.

Penn State’s offense was led by Aidan Albrecht, who had 7 kills on 5 swings (.267 hitting percentage). He also had the Nittany Lions’ only ace on the day, but contributed to 6 of their 13 service errors as well.

The final chapter in the careers of Princeton seniors Junior Oboh, Mike Fuerst and Trey Sickler seemed destined for disappointment less than two months ago. That wasn’t good enough for them, nor was it good enough for their young, talented Tiger teammates. So they took the pen, and they authored something far more dramatic, far more exciting, and far more historic.

And that final chapter … well, it isn’t finished yet.

Princeton made program history Friday night by recording the first road win ever at Penn State, which ended a 32-match drought against the traditional power of Eastern volleyball. The win clinched the fourth and final berth in the EIVA postseason, which begins next Thursday night at George Mason, and it clinched the first two-match win streak over Penn State since 1998, which also happens to be the last time Princeton won that EIVA title.

This win also happened to be the most decisive one since the 1998 championship run, when Princeton recorded two 3-0 wins over Penn State (including one in the EIVA semifinal). Princeton edged the hosts for a 25-23 first set, and then took absolute control of the final two sets for consecutive 25-17 wins. The Tigers’ third-set offense was as efficient as it has been at any point this season; they had 15 kills on 22 swings without an error (.682).

“I couldn’t be prouder of the way the guys competed tonight,” head coach Sam Shweisky said. “There was a focus and attention to detail that was there from the first serve to the last one, and it shows what this team is capable of on the eve of the EIVA postseason. I give a ton of credit to our senior leaders, who helped get us through some tough times and capitalized on the opportunity tonight. Junior Oboh gave us four kills, four blocks and four digs, while Mike Fuerst had a huge momentum ace late in the first set to give us the lead.”

While Shweisky tipped his cap to the seniors, everybody in attendance had to salute sophomore opposite George Huhmann, who continues to raise the bar on what can be considered his career-best match. He carried Princeton to this historic feat at Penn State with 19 kills, three blocks, three digs and a .531 attack percentage. Huhmann had help, especially from classmates Greg Luck and Parker Dixon, who combined for 15 kills. Corry Short had one of his best efforts of the season with 12 digs, while Joe Kelly paced the offense with 31 assists.

But Huhmann’s performance is the type that warrants All-America and Player of the Year consideration. He had five of the final six kills of the first set, the only close one in the match, and he had six in each of the final two sets to keep Penn State from getting any type of traction in the match.

The Princeton win, combined with George Mason’s 3-2 win over Harvard Friday night, clinches the matchups for Thursday’s EIVA semifinals. Harvard and Penn State will meet in the opening semifinal, with the Tigers taking on the host Patriots in the nightcap. Based on regular-season matchups, this could be the most exciting and anticipated EIVA postseason in history; of the 11 matchups so far this season between the four schools (Harvard and George Mason play again Saturday night), six went to a decisive fifth set. All six represent one meeting apiece between each of the four schools, including a 3-2 Princeton win over Penn State, and 3-2 Princeton losses to both George Mason and Harvard.

UNIVERESITY PARK, Pa. — Returning home after a four-match road swing, the Penn State men’s volleyball team didn’t find the confines as friendly as they would have liked in a 3-0 loss to Princeton (23-25, 17-25, ) on Friday (April 13) evening inside of the Recreation Building.

The Mike Anderson Man-of-the-Match was redshirt-senior Aidan Albrecht (Old Bridge, N.J.). He led Penn State with seven kills and added one dig, one service ace and one block. Albrecht led the Nittany Lions in kills for the 19th time in his career and eighth time in 2018.

For Princeton, George Huhmann led all attackers with 19 kills on 32 swings, with just two errors, to boast a .531 hitting percentage. Joe Kelly handed out 31 assists, Junior Oboh had five blocks and Corry Short posted 12 digs, with both totals the match high.

Princeton raced out to a 7-2 lead in the opening set, prompting a Penn State timeout. The set was playing a back-and-forth manner for the next 12 points to make it 13-9 in favor of the Tigers. A Huhmann service errors started a 9-3 run for PSU to give the Nittany Lions an 18-16 edge on back-to-back kills by Mende. A pair of errors from Penn State evened things up at 18-all and the set also saw an even score at 19, 22 and 23. Princeton used a service error by Jason Donorovich (Lockport, N.J.) to gain match point and Huhmann ended the first set with a kill. Huhmann led all attackers with seven kills in the opening set, while Mende and Albrecht paced Penn State with three kills apiece.
Princeton 25, at Penn State 23
Princeton leads 1-0

After the second set saw ties at each increment up to 4-4, Penn State reeled off back-to-back points on a Mende kill and a Tiger attacking error to take a 6-4 edge. Princeton, however, scored the next six points, four coming on kills, to gain control of the set at 10-6. The lead hovered around four points up to 19-15, when Princeton used three kills and a service ace to push its lead to eight points, 23-15. The Tigers were able to exchange side out points to claim a 25-17 set win and take the 2-0 lead in the match.
Princeton 25, at Penn State 17
Princeton leads 2-0

The two teams exchanged service errors to begin the third set, but Princeton scored the next five points — including three attacking errors from Penn State — before a Matthew McLaren (Aurora, Colo.) kill halted the run to make it 6-2 in favor of the visitors. The lead swelled to six points, 9-3, on a Huhmann kill, before the Nittany Lions used kills from Nathan Smith and Albrecht to trim it back to four. After a bit of side-out volleyball, Princeton ran off five-straight points to push the lead to 18-9 and Penn State wouldn’t get much closer. The Tigers and Nittany Lions traded points most the rest of the way to earn the 25-17 set three win and claim the match. The third set was Penn State’s most efficient on the attack, hitting .308, but Princeton closed the match with a .682 attacking percentage in the final set.
Princeton 25, at Penn State 17
Penn State leads 1-0

Up Next
Penn State will host NJIT on Saturday (April 14) at 7 p.m. inside Rec Hall for the final match of the regular season. The Nittany Lions will honor the senior trio of Aidan Albrecht, Kevin Gear and Jalen Penrose in a pre-match ceremony.