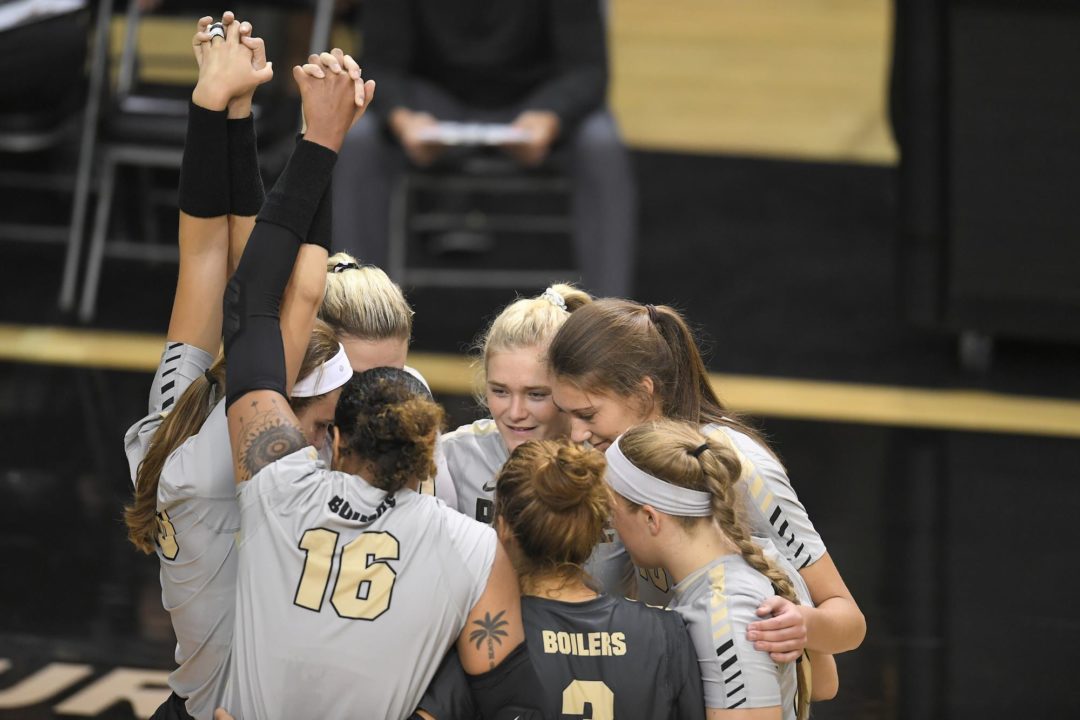 The No. 23 Purdue volleyball team continues Big Ten play, as the Boilermakers head north for a pair of matches in the Great Lakes State.  Current Photo via Purdue Athletics

WEST LAFAYETTE, Ind. – The No. 23 (AVCA 14) Purdue volleyball team continues Big Ten play, as the Boilermakers head north for a pair of matches in the Great Lakes State. Purdue first visits No. 17 (AVCA 16) Michigan for a 9 p.m. BTN showdown on Friday, before heading to East Lansing to take on Michigan State at 7 p.m. on Saturday.

Scouting No. 16 Michigan
Following a three-set loss to No. 9 Penn State, Michigan brings a 2-2 Big Ten record into Friday’s match. The Wolverines previously lost to then-No. 3 Nebraska, but defeated Iowa and Rutgers over the first two weeks of conference play. Michigan mirrors Purdue’s 13-2 overall record and is currently 9-1 at home this season. A well-rounded team, the Wolverines also rank fourth in the nation with a .144 opponent hitting percentage, sixth in the country with 13.73 assists per set and eighth in the nation with 14.56 kills per set. Michigan has had four players earn kill-dig or assist-dig double-doubles this season, including freshman Paige Jones, junior MacKenzi Welsh, junior Sydney Wetterstrom and Carly Skjodt. Defensively, the Wolverines are guided by senior libero Jenna Lerg, who has recorded 13 matches with double-figure digs and averaging 5.42 digs per set to rank 18th in the country.

Last Meeting vs. the Wolverines
In 2017, Purdue and Michigan faced off in back-to-back matches at the end of the regular season. Playing in both Ann Arbor and West Lafayette, the Wolverines were victorious, claiming both contests 3-1. In the first match up last season, Sherridan Atkinson registered 20 kills with a .302 hitting percentage while finishing an ace, four blocks and a dig away from a double-double. Caitlynn Newton earned 10 kills with a .250 hitting percentage on the outside, while Shavona Cuttino added six kills to go along with her five blocks. In the year’s second game, Blake Mohler tallied 14 kills on a .300 hitting clip and Brooke Peters was once dig shy of posting her third 20-dig effort of the season. The pair of losses snapped Purdue’s eight-match winning streak against Michigan. Overall, Purdue owns the all-time series against Michigan, 48-26. The Boilermakers last defeated the Wolverines, 3-1, in an October contest in 2016 at Holloway Gymnasium.

Scouting Michigan State
The Spartans are coming off a 3-1 victory over Rutgers last week to snap a three-game losing streak. Overall, Michigan State is 13-4 and 1-3 in Big Ten action, including a 4-1 showing at home. Statistically, MSU continues to lead the Big Ten and ranks seventh nationally in service aces per set (1.86), with 108 aces over 58 frames.  The Green & White boast five matches with double-digit aces, the most of any team in the Big Ten.  The single-match high of 14 is held by both Maryland (vs. Ohio State) and Rutgers (vs. Coppin State), with MSU’s 13 aces vs. Chattanooga ranking third.  Defensively, the Spartans are averaging 2.93 blocks per set, which is good for third in the Big Ten and seventh nationally.

Last Meeting vs. the Spartans
Purdue and Michigan State last met on November 24, 2017, when the Boilermakers defeated the Spartans at Holloway, 3-1 (20-25, 25-23, 25-20, 25-21) in their regular season finale. The victory marked Purdue’s upset over a top-10 opponent in 2017. Middle blocker Blake Mohler was a consistent problem for the Spartans as she finished with 11 kills on 22 swings and hit .364 with four blocks as well.  Sherridan Atkinson was contained to eight kills but denied two of Michigan State’s attempts and added an ace to her line. Caitlyn Newton factored in five clutch kills and a .272 hitting percentage in the final two sets. The teams will meet again on Halloween night in West Lafayette.