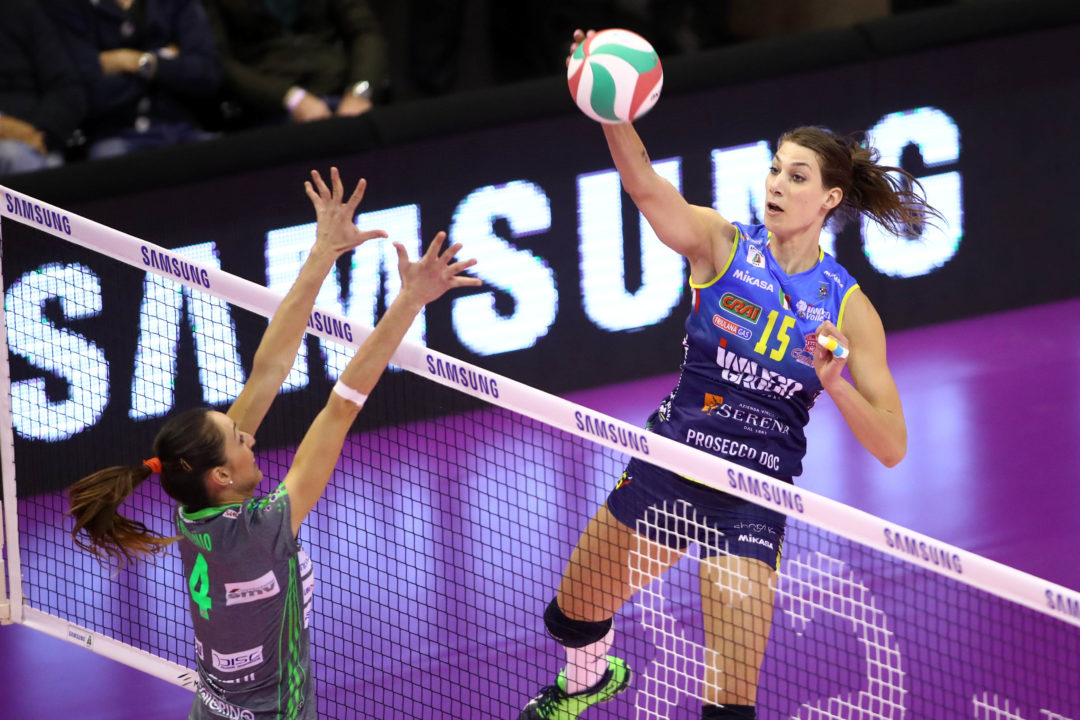 Robin De Kruijf's season has come to a premature close with an injury to her knee.  Current Photo via Filippo Rubin

Dutch star middle blocker Robin De Kruijf has sustained an injury to her knee and will miss the rest of the club season. The Imoco Volley Conegliano leader will be undergoing surgery on her left meniscus, but the severity of the injury and expected recovery time will not be clear until several days after the surgery when doctors have time to assess the repair further. She has confirmed that she will not be able to complete her club season via her Instagram, but hasn’t commented on whether she’ll be able to play this summer for the Netherlands.

With the Italian regular season coming to a close and the CEV Champions League in full swing, the injury comes at a bad time for her club team. De Kruijf is currently ranked 5th among middle blockers in the Italian Serie A. She sits in 7th in blocks with 51 in 67 sets played. Her offense has been equally as impressive with her 53.22% attack efficiency. Conegliano will miss the Dutch international for the remainder of the 2018 season, but have a star-studded lineup ready to step in to ease the blow. That includes American National Team outside hitter Kim Hill, who ranks 9th in the league this year with 323 points.

It will be up to a combination of Italian-born Raphaela Folie and Laura Melandri to fill in that 2nd middle blocker role alongside Anna Danesi for the remainder of the year.

Vonegliano currently ranks 1st in the league this year with 50 points through 21 matches, with an overall 17-4 record. Scandicci has the same record, but with two fewer 3-2 losses, they only have 48 points. Conegliano, the 2017 Italian Cup Champions, have only 1 regular season match remaining against 7th-place Pesaro before the upcoming playoffs begin.

Me talking to my knee right now🤦🏻‍♀️🤬 My season is over and I’ll have surgery this week.. Thanks for all the sweet messages!😘 I’ll be back (terminator voice)😁