My Journey To the Beach: Ivy Reynolds, Take 2 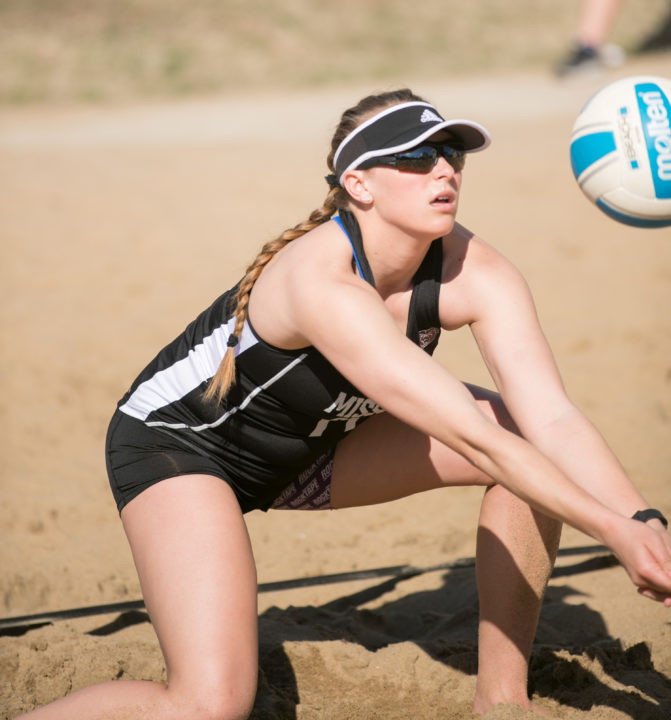 In her second My Journey to the Beach entry, Missouri State's Ivy Reynolds shares about the unintentional path that prepared her for grad school and, in turn, two seasons on the sand.  Current Photo via Missouri State Athletics

Ivy Reynolds is one of several fifth-year student-athletes taking on the beach game for the first time. The Lindenwood alumna is in her first spring at Missouri State after graduating early.

In her second My Journey to the Beach entry, Reynolds shares about the unintentional path that prepared her for grad school and in turn two seasons on the sand.

Reynolds and the Bears saw their first action March 2, facing Nebraska. Reynolds paired with Lynsey Wright at the No. 5 position.

To say I booked it through college would be an understatement.  Before I even decided on a school, I was taking dual-enrollment classes at the local community college in connection with my high school. By the time I signed my national letter of intent, I had completed 12 credit hours of universal general education requirements. I was feeling good going into my last summer of being a care-free teenager, until a phone call from my college coach sped up my countdown.  Apparently my team had lost a setter at the last minute, and I was asked to attend the last quarter of summer school so that I could train at that position. It wasn’t what I was recruited to do, but requests from the people who sign off on your scholarship are often filled. So I left for St. Charles, Missouri, four weeks earlier than planned and completed yet another course, sending me into my first semester of college with 15 credits on my transcript.

Earlier in the year I had registered for classes.  As a three-sport athlete in high school with a 4.00 GPA, I thought nothing of it when my advisor placed me in 18 credit hours.  I had expressed my goal of graduating early and taking six courses seemed like the best way to get on the right track.  Thus started my obsession with filling my schedule to the max.  Once I conquered my first collegiate volleyball season of practice, weights, travel, competition, study hall, and, oh yeah, my six classes, I determined I could go pro at doing college. And that’s what I did.  I gave up half my Christmas break the next couple years to take a January term, took on a two-year internship, starting coaching part time and even picked up a minor along the way.

Graduating college always seems so far in the future.  It’s one of those things, like marriage or starting a career or buying a house, something we assume will happen eventually, but not necessarily something that needs our immediate attention.  Without any warning the “eventually” becomes right now.  I had become so obsessed with finishing school that I kind of forgot what comes after it: real life. I never had any real intention of attending graduate school.  You can really ask anyone, because I was not quiet about my feelings of dislike toward the idea of more school.  Well, God has a funny way of helping you take your foot out of your mouth.

I’m currently at midterms week in my first semester of my master’s program. The routine is different; I’ve never had an online class (always seemed like a cheat to me, but I think I’ve been converted) and my other two courses are a rush to get to after practice.  So far, it’s better than I thought it would be.  I’m starting to realize my original dislike of grad school did not stem from the level of difficulty in the classes or even in the fact that I would be a student for another few years.  I rejected the idea because I did not know how to be in school without being an athlete.  It seemed like a plan doomed for failure, so I never gave it much thought.

Back in December, I was starting to regret graduating early.  I had put myself in quite the jam, knowing that if I didn’t figure something out, I wouldn’t just be spending Christmas in my parent’s house, but Easter, too.  But now, hindsight is 20/20 and I’m loving my vision. Let me explain.  Writing this in March, I see that graduating early was exactly what I was meant to do.  My master’s program can be completed in a year and a half, and since I never took a redshirt year, that’s exactly the amount of eligibility I have left.  We’re nearly eight weeks through season with one competition under our belts, and I know I will not be satisfied with just one season in the sand.  Thanks to planning that started nearly 5 years ago, as a senior in high school taking college courses, my athletic career will continue on.

In undergrad, there are a lot of times I said that not being an athlete would make college so much easier.  If only I could replace some of those three-hour practices with time editing in the studio.  If only I could stay up and study later, instead of having to turn in early because of morning weights.  If only I had a free weekend in the fall to take a breather instead of spending hours on the bus, praying the Wi-Fi holds so I can turn in an assignment.  I spent a lot of time wishing for the non-athlete life, never fully noticing it was the only thing getting me through.

I’m not saying I wake up for weights at 5:50 a.m. happy as a bird with a french fry.  Lifting, practice, and competition are still exhausting.  Travel is still hard to navigate when you miss class. But I wouldn’t take it any other way.  The Beach Bears have become my rock since I moved here, and it’s empowering to know I won’t have to face the struggle of college without them.