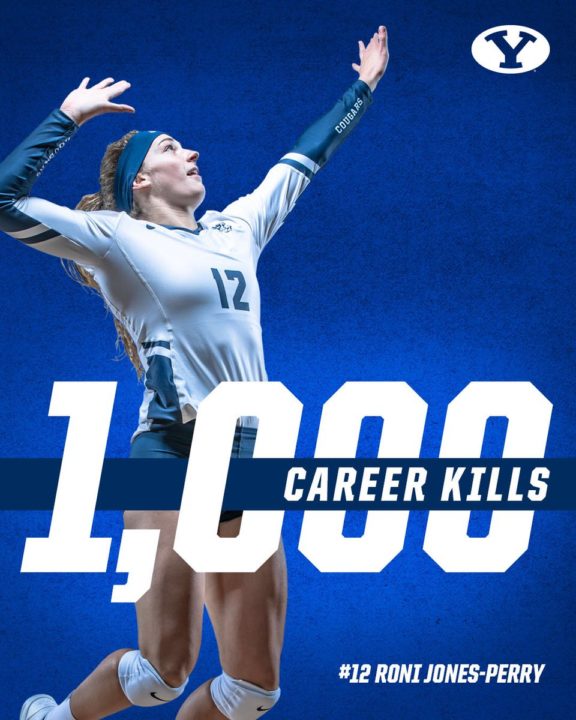 Roni Jones-Perry is the 15th player from BYU to reach the 1,000 kills milestone. Current Photo via BYU Athletics

kills The BYU Cougars had plenty to celebrate on Friday after pulling off a 3-2 upset over #1 Stanford in the BYU Nike Invitational. Roni Jones-Perry led the way for the Cougars with 20 kills and a .349 hitting percentage. After coming into the match with 991 kills, those 20 kills helped her reach a career milestone surpassing the 1,000 kill mark. She now sits at number 15 on the all-time kills leader list at BYU. It puts her right behind Rachel Dyer on the all-time list. Jones-Perry is just 29 kills away from reaching Dyer’s mark of 1,400 kills.

At this point in the season Jones-Perry has accrued 44 kills. That puts her as the second-leading attacker for BYU behind McKenna Miller’s 50. Jones-Perry is scoring at a rate of 3.38 kills per set. Her most productive year as an attacker came last season when she finished with 569 kills at 4.82 kills per set. That led the team and earned her a spot on the All-West Coast Conference First-Team. She was also named to the AVCA All-American Third-Team last year.

BYU is currently 4-0 and ranked #8 in the VolleyMob Top 25 Power Rankings. They are 2-0 in the BYU Nike Invitational, and will win the tourament with a victory over Wichita State on Saturday evening.