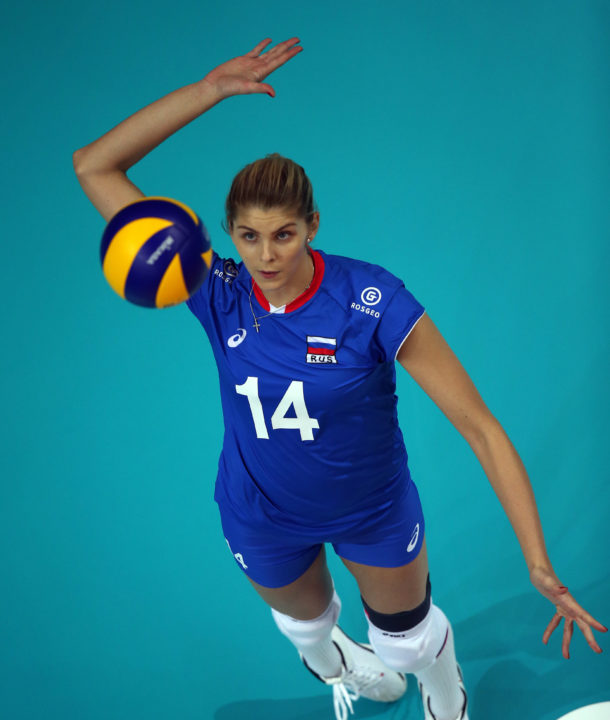 The Russian block, led by 6 from Irina Fesitova (above), stifled Italy's reserves in the semi-finals of the Rabobank Super Series. Archive Photo via FIVB

On Saturday at the 2018 Rabobank Super Series, the action shifted to Eindhoven, where a pair of sweeps punctuated the semi-finals of the tournament.

Like they’d done in match 2 of the preliminary round of the tournament, and reinforcing its place as a glorified series of friendlies, Italian coach Davide Mazzanti went to a subordinate lineup for the semi-final match, holding to his plan of starting alternately his top lineup, and then his reserves, by match. Saturday’s average roster was under 21-years old, and their inexperienced against a veteran Russian team showed early.

Russia jumped out to a big lead in the 1st set, and its outcome was never really in doubt as they rolled to a comfortable 7-point win. In the 2nd, Italy jumped out to a 14-11 lead, but Russia responded to win the set. Italy again led early in the 3rd set (10-6), but their passing game struggled late, allowing Russia back into the match, and eventually to win.

Irina Voronkova, who didn’t play in Russia’s last match on Thursday but who led the team in scoring on Wednesday, was back in the lineup for the semi-final. She scored 10 points to again lead her team in what was a well-balanced scoring load.

Voronkova was 10/25 on hitting, or a 40% success rate, while middle blocker Irina Fesitova had 6 of her 8 points on blocks.

For the losing Italians, Elena Pietrini, who is only 18-years old, led the team in scoring with 13. While the 6’3″ outside hitter only hit 28% (7/25) in the match, she did record 4 aces. The young Pietrini’s service is what is propelling her early into Italy’s senior squads. At the Nations League, she had 19 aces, which ranked her 4th among all nations in the tournament.

Paola Egonu, who had 31 points in the team’s last preliminary match, did have a brief role off the bench, but only picked up 1 point.

Russia advances to play Netherlands in the final, while Italy, presumably with their top lineup alternated back onto the court, will play Turkey in the 3rd-place match.

Dutch coach Jamie Morrison rotated his starting middle blockers back to Yvon Belien and Julie Lohuis on Saturday for the semi-final, and the result was the same as it was on every other combination of the 3 middles (Nicole Koolhaas being the other) that he’s tried this week, and he’s tried them all. The Dutch came away with a 3-0 sweep of Nations League runners-up Turkey. Lohuis is a rookie on the National Team, but again showed her talents.

In the first set, the Dutch opened up a big 20-12 lead before Turkey went on a 10-2 run to tie the match at 22. The Netherlands would rotate again and finish with 3-straight points to end the set, however.

In the 2nd, the Netherlands again jumped out to an early 18-8 lead, driven forward by a strong service run from Lohuis, and there was no comeback to be had for Turkey this time.

In the 3rd set, Morrison subbed-in Celeste Plak at opposite for Anne Buijs, and in the most competitive frame of the affair, Turkey jumped out to the lead at 14-9. At 19-16, Morrison made a double change, bringing on Britt Bongaerts and returning Buijs to the court. It was eventually Plak who sealed the match with a tip shot.

Stats for the Netherlands vs. Turkey match were not available.

Russia – Italy, Rabobank Super Series tournament in Eindhoven, The Netherlands (no sound in time-outs and between sets).

Posted by VolleybalNL on Saturday, August 11, 2018

Posted by Volleybaldames on Saturday, August 11, 2018