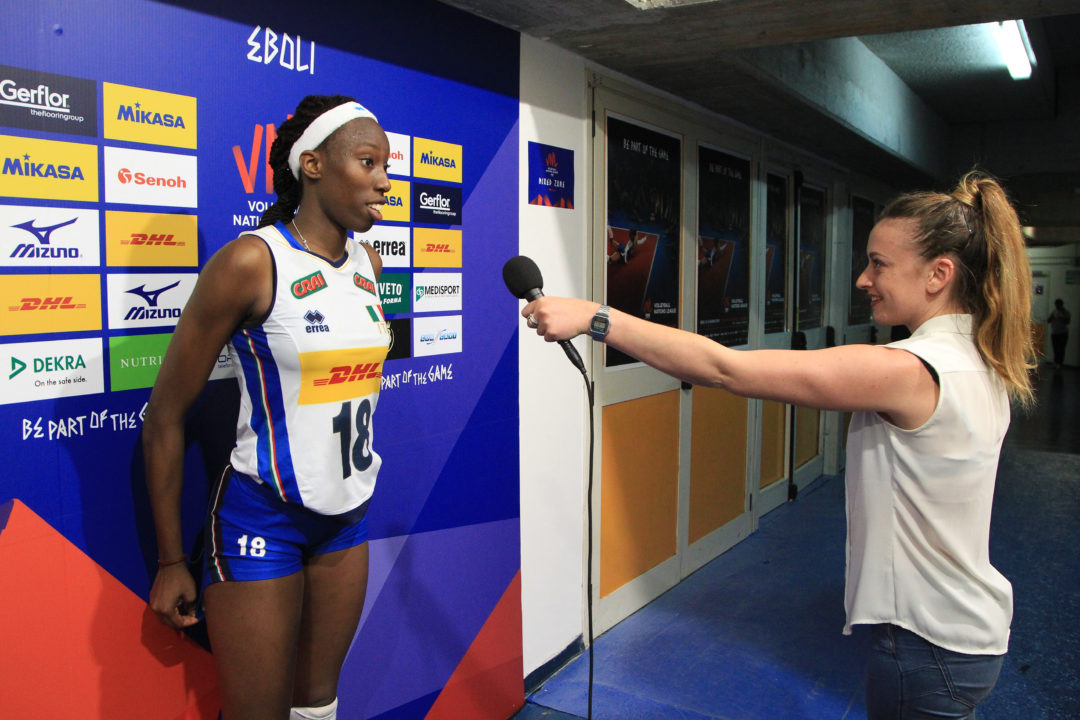 The Dutch women won their 3rd-straght match on Thursday by beating Russia 3-2 to close preliminary play of the Rabobank Super Series, while Italy topped Turkey 3-1 to seal up the 2nd seed to an everybody-advances semi-final.

The series will now shift to Eindhoven, where on Saturday, the Netherlands will play Turkey, while Italy faces Russia. The winners advance to the championship match on Sunday, while the losers drop to the 3rd-place match.

Dutch coach Jamie Morrison continued to keep his team’s starting lineup pretty close to his best. His only change, again, was the third leg of a round-robin rotation of his middles, giving the start to Juliet Lohuis and Nicole Koolhaas.

While Yvon Belien’s spot in the middle for the Netherlands seems secure, they are still looking to shore up the position as they await the return of Robin de Kruijf from injury. Lohuis only scored 3 points in the Netherlands’ 2nd match, while starting alongside Belein, but out of the veteran’s shadow, she responded on Thursday with 17 points on 14/19 hitting in the match. Koolhaas also played well with 13 points of her own, including 4 aces, as both starting middle blockers landed in double-digits.

The play of the middles was key for the Dutch, as their hitters struggled offensively. Opposite Lonneke Sloejtes, after scoring only 2 points on Wednesday, picked up 14 on Thursday, but it took her 43 swings to do so (23.3% hitting). Celeste Plak had 14 on 10/31 hitting, while Annie Buijs had 10 points on 7/28 hitting.

Russia was led by their captain Ksenia Parubets for the 2nd straight night, this time with 22 on 20/38 hitting. Irina Fesitova contributed 5 blocks to the effort (the Russian block was a big reason for the low hitting numbers by the Dutch offense). Irina Varonkova, who led Russia in scoring on Wednesday, didn’t play on Thursday.

In a match that carries significance beyond this week’s series of glorified friendlies, because the two teams will face off on October 3rd in the preliminaries of the World Championships, Italy went back to their “A” lineup and handled Turkey easily, 3-1.

The Italians played a “B” roster on Wednesday and were swept by the Netherlands, but on Thursday they closed preliminary play with their usual starting cast. 19-year old opposite Paola Egonu, one of the world’s most exciting young players, led the way for Italy with 31 kills in the match.

In spite of a rousing win, Lucia Bosetti said after the match that she still sees room for improvement.

“Today we have made small steps forward from the point of view of the game and also in the next games we want to grow, because the main goal is to add something in every match,” Bosetti said. “There is still a lot of room for growth, for example we can limit the number of errors: today we have committed many and in the third set it has cost dearly.”

But the overall Italian tone after the match was positive, with Ofelia Malinov noting the success over Turkey, who were runners-up in the Nations League earlier in the summer.

Turkey was led in scoring by its two veterans, 30-year old outside hitter Meryem Boz, who had 18, and 31-year old middle blocker Eda Erdem, who had 17.

Turkey beat Italy 3-0 in both teams’ opening match of the Nations League, but Italy was without many of their top players, including Egonu, for that affair.

Italy – Turkey, Rabobank Super Series tournament in Hoogeveen, The Netherlands (no sound in time-outs and between sets).

Posted by VolleybalNL on Thursday, August 9, 2018

Italy – Turkey, Rabobank Super Series tournament in Hoogeveen, The Netherlands (no sound in time-outs and between sets). Part 2

Posted by VolleybalNL on Thursday, August 9, 2018