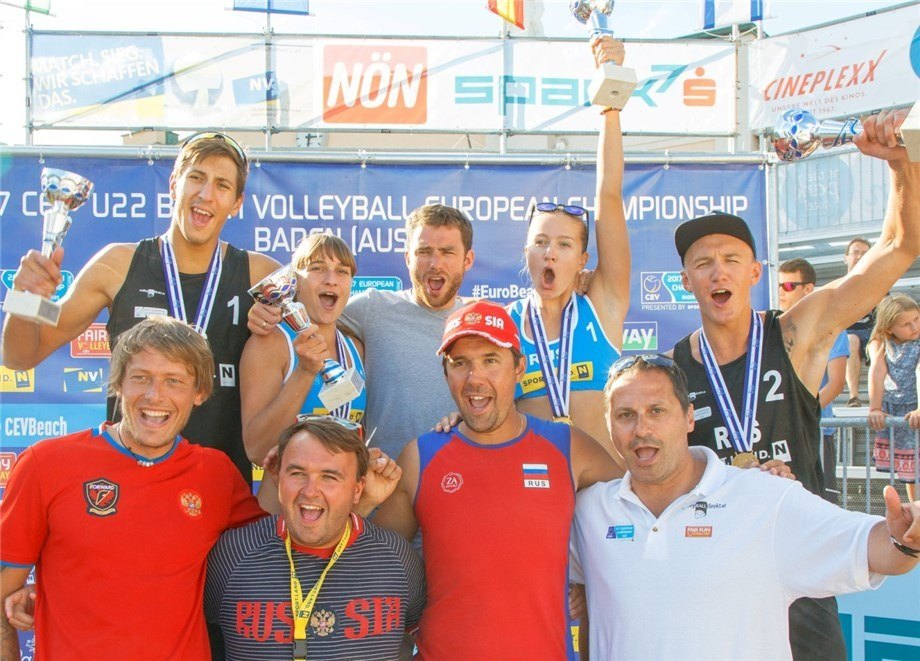 Kholomina/Makroguzova defeated Romanians Adriana-Maria Matei/Beata Vaida 21-15, 21-15 in the championship match. The victory marked the first underage European Championship gold for the duo, which won U20 bronze in 2015 and FIVB U21 silver in 2016.

This was an easy game for us, because we have been training for this competition,” Makroguzova said. “We had very good blocking and managed to win.”

Both teams advanced after outlasting foes in three-set semifinal contests. The Russians overcame a first set loss to Switzerland’s Dunja Gerson/Esmee Bobner to win 15-21, 25-19, 15-8. The Romanians made the final after outlasting Germany’s Lisa Arnholdt/Leonie Welsch 29-31, 21-1, 22-20.

The Russian men advanced to the final with a 21-18, 21-14 win over Austrians Moritz Pristauz/Paul Buchegger, while their foes from Norway, Mathias Bentsen and Andres Berntsen Mol made quick work of France’s Arnaud Loiseau/Arnaud Gauthier-Rat 21-8, 21-7 to make the main stage.

In the final, the Berntsen cousins took the first set 21-14, but the Russians stormed back to take Set 2 21-17. Bernsten/Mol had double-match point at 14-12, but Stoyanovskiy/Yarzutkin tied it up at 14. The Russians fought off another match point attempt en route to the 17-15 win and the title.

The gold medal marks the second European title for the Russians, following an U18 title in 013 and a gold medal at the 2014 Nanjing Youth Olympics. The pair plays on the FIVB World Tour and finished second at the Kish Island Open in 2016.

“This is a great feeling,” Stoyanovskiy said. “It is our second time as European champions and that is very nice! The final was a very hard match, because the guys from Norway are really strong. We managed to defeat them and we are very happy. Our semifinal against the Austrian team was pretty much a tough game too. We were a little bit better at blocking and at defense and that was the key to our win.”

The Austrians, Pristauz/Buchegger, enthralled their home crowd by securing the bronze medal with a 23-21, 22-20 win over their French foes.