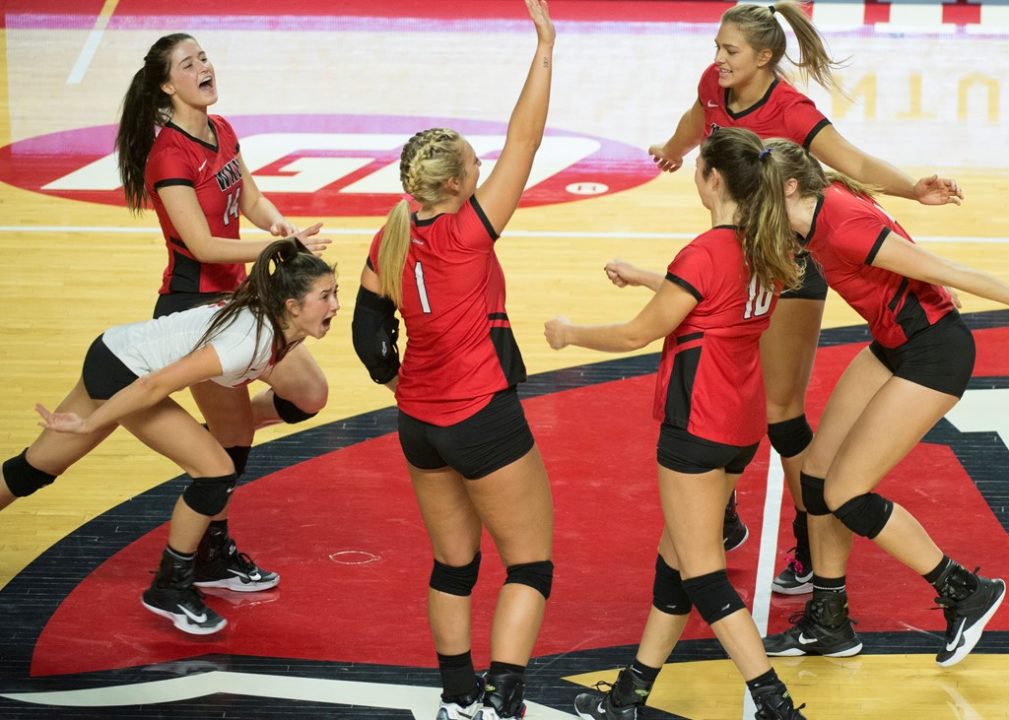 MURFREESBORO, Tenn. – For the fourth time in as many seasons, the Lady Toppers of Western Kentucky earned their fourth Conference USA regular season title by sweeping Middle Tennessee State, 3-0 (25-20, 25-13, 25-16). WKU is the first team ever to win four straight C-USA titles. It was also the Lady Toppers 23rd straight victory. WKU also leads the country in wins by sweep, with 21.

Western Kentucky were led by junior middle blocker Rachel Anderson with 15 kills, 3 digs, a team-high 3 blocks and 2 assists. She also hit .385 on the afternoon. Senior setter Jessica Lucas ran a highly efficient offense (.389) with 27 assists to go along with a team-high 7 digs, 2 aces and a block. Senior outside hitter Alyssa Cavanaugh got 7 kills on 10 swings with only one error to hit .600 in the match.

MURFREESBORO, Tenn. – For the fourth-consecutive season, WKU Volleyball has claimed at least a share of the Conference USA regular season title with today’s sweep at Middle Tennessee. The 25th-ranked Lady Toppers are the first Conference USA squad to ever win four-straight regular season titles and would clinch the outright title with a win at North Texas. Rachel Anderson delivered 14 kills to lead the way as the Lady Toppers won their 23rd-straight match and moved to 27-2 overall.

“It’s incredible; and I believe this title has been the hardest one to come by, just with the pressure that’s been on these kids all year,” head coach Travis Hudson said of the team’s fourth-straight regular season C-USA title. “It’s a relief to see that come to fruition and watch those kids that have sacrificed – I mean when you’re as talented as we are, kids have to make sacrifices and we’ve done that all year long. I did not know it was the first time in Conference USA history; I’m really proud of our kids.”

“It’s crazy to think this title is something we were talking about at the beginning of the year and now all of those things are starting to come through,” Jessica Lucas shared. “Like we say all the time, we like to do things that have never been done here and now that’s something we can add to the list; it’s incredible to know our hard work is paying off.”

With the sweep, the Red and White are up to 21 three-set wins on the year, which leads the NCAA. WKU is now 13-0 in Conference USA matches and has won 38-straight matches against C-USA foes dating back to 2015.

Middle Tennessee came out strong in the day’s opening set, leading WKU as late as 9-7, before the Lady Toppers strung together nine-straight points.  With a 16-9 lead the rest of the way to the 25-20 first-set win. Anderson led the way for WKU with eight kills in the frame as the Lady Toppers worked at a quiet .296 offensive clip.

“It’s always tough playing here, Middle Tennessee is a team that always plays so incredibly hard,” Hudson said. “I’m really excited we were able to find a way to get a win in such a tough environment”

Set two saw the Red and White lead from start to finish after Anderson and Taylor Dellinger combined for a block to get things going. WKU worked ahead to a 12-3 advantage thanks to a Sophia Cerino service ace and then pushed ahead to a 16-4 lead. MTSU fought back, putting together multiple runs but the Lady Toppers closed the door with a Kayland Jackson kill for the 25-13 set two win. WKU worked at a .308 attack rate in set two while limiting the Blue Raiders to a .083 clip.

WKU and MTSU traded points to open the third set before the Lady Toppers pushed ahead to a 5-2 lead they would not relinquish. The Red and White worked ahead to an 8-3 advantage before Middle Tennessee called for a stoppage, out of the break WKU extended the lead to 11-4. Pulling back within four at 12-8, MTSU wasn’t going away and worked back within four points on multiple occasions. Down the Stretch, the Lady Toppers closed the door by claiming the final three points for the 25-16 win. Anderson and Jackson each added three kills in the frame as WKU saw six different players register a kill. The Lady Toppers worked at a blistering .632 offensive rate in the final set.

Anderson led the way for WKU for the second-straight match with 14 kills after posting 15 Friday night at Rice. The junior also added three block assists, three digs and a pair of assists to go along with her .385 attack rate.

“We pride ourselves on being able to come at teams any way they allow us to,” said Hudson. “Whatever the defense gives us, we’re going to take. This was a day when they gave us some options with Rachel [Anderson] and she was up to the challenge and stepped up and played really well.”

Alyssa Cavanaugh capped the day with seven kills on 10 swings for a .600 hitting percentage while also adding a pair of digs and a solo block. The block tied Cavanaugh for eighth on WKU’s career solo block list.

Jackson finished with five kills on five swings for WKU on the day while also chipping in a block.

Jessica Lucas finished the match with 27 assists and seven digs. The senior setter contributed offensively herself, notching four kills and a pair of service aces to go along with a block. Lucas’ seven digs was a match-high for the Lady Toppers

WKU out-blocked MTSU 5.0-4.0 as Anderson tallied a team-best three stops at the net. Dellinger chipped in a pair as well.

Set by Set
In the first frame, the Blue Raiders pushed out to a 7-4 lead over the Lady Toppers with kills from sophomore Dora Peonia, junior Makila York and sophomore Taylor Hammill. However, the Lady Toppers responded with a 12-2 run over Middle Tennessee to take lead of the set, 16-9. The Blue Raiders battled within four, 24-20, but fell short to drop the first frame to WKU, 25-20.

Western Kentucky led the second and third frame, posting identical 4-2 leads. The Lady Toppers clinched the second frame, 25-13, before securing the match in the final set, 25-16.

The Blue Raiders C-USA record moves to 2-10 while WKU advances to a 13-0 conference record to clinch the regular season title.

Similarly, Peonia tallied 11 kills and two digs over the Lady Toppers. After this afternoon’s match the Castel Bologenese, Italy product has recorded 268 kills this season to average 2.79 k/s this year.

The backrow was paced by sophomore Brienna Tankesley notching 10 digs in the match for the Blue Raiders.

Quotable
” As a team we were a lot more confident in this match, when we play bigger teams we tend to play up to their level and I could definitely feel the energy of our team throughout the entire match. I believe I was able to get as many kills as I did this afternoon by connecting with Taylor more than I usually do and becoming more aggressive with my swings. Preparing for FIU on Thursday, I am definitely going to continue to come into practice focused and determined to get every detail perfect. Thursday is also ‘Sloan Night’ (senior night) o, we are definitely going to be playing for her and fighting for the win”. – Junior Bailey Mason