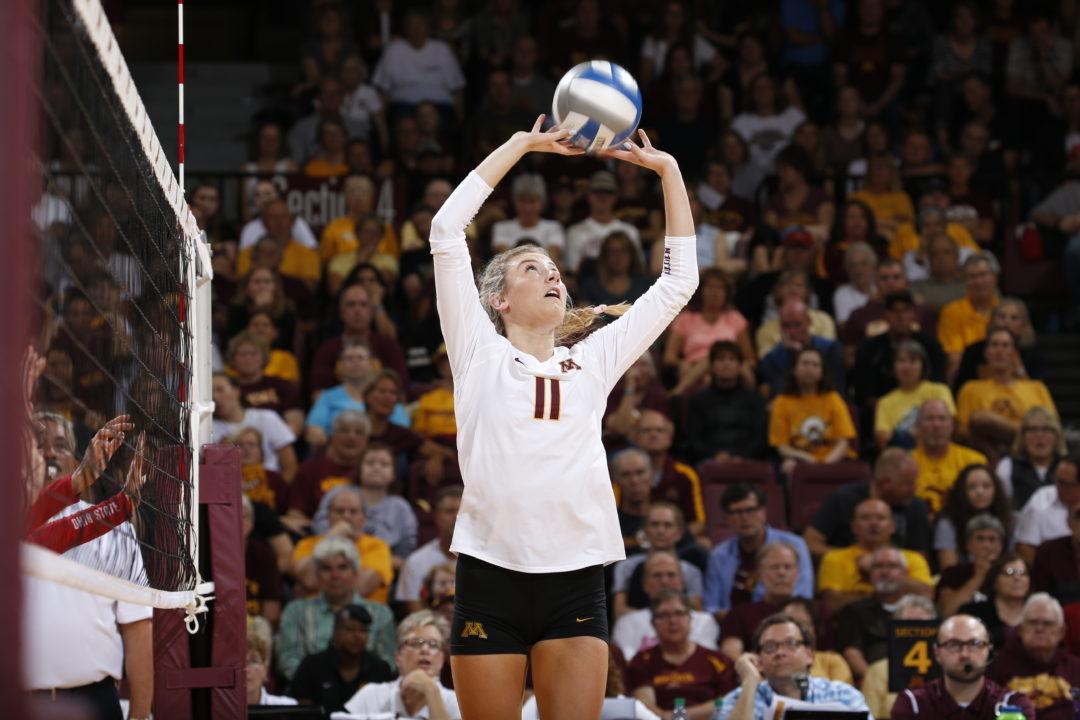 Make it 11 wins in a row for the Minnesota Golden Gophers after a straight set win over the visiting Ohio State Buckeyes. Set scores were 25-22, 25-22, 25-19. Stephanie Samedy led the offense with 13 kills while Alexis Hart Chipped in 12. Dalianliz Rosado led the defense with 16 digs while Samedy chipped in 11. Samantha Seliger-Swenson dished out 39 assists, in the process reaching a career milestone by passing 4,000 career assists.

Congrats to Samantha Seliger-Swenson, who has over 4,000 career assists with the #Gophers! pic.twitter.com/Cn4qXtr801

Although the Gophers led the match in every major statistical category, it was far from domination on the stat sheet. Minnesota led the match in kills 51-45, assists 48-42, digs 51-46, aces 5-4, and blocks 6-3. The Gophers hit .353 for the match compared to just .259 for the Buckeyes. Minnesota improved to 23-2 (12-2 Big Ten) and will return to action on Saturday, November 11th when they travel to face Purdue.

Luisa Schirmer led the Buckeyes’ offense with 13 kills while Ayanna Swan chipped in 10. Taylor Hughes dished out 31 assists and Ashley Wenz and Bia Franklin shared team high honors with 11 digs apiece. Ohio State drops to 13-12 (6-8 Big Ten) and will return to action on Wednesday, November 8th when they travel to face Rutgers.

As a team, Minnesota hit .353 to Ohio State’s .259 and had 51 kills. Stephanie Samedy had a double-double in tonight’s match with 11 digs and a team-leading 13 kills. Alexis Hart hit .435 with 12 kills, while Molly Lohman and Regan Pittman each had nine. Dalianliz Rosado led the Gophers with 16 digs in the win.

Two Gophers reached career milestones tonight, Lohman reached over 500 career blocks and Samantha Seliger-Swenson amassed over 4,000 career assists. Lohman’s four blocks in the match put her at 501 and Seliger-Swenson’s 39 assists put her at a total of 4,028.

The Gophers travel to West Lafayette, Ind., November 11 to take on Purdue. First serve is set for 4:30 p.m.

First Set: The Gophers hit .316 in the opening set to win, 25-22. Minnesota trailed 2-5 before it came back and tied the set at 5-5. After the teams traded points, Ohio State took a three-point lead at 15-12 as the Gophers called a timeout. Minnesota tied up the set at 16-16 off an OSU attack error and took a 17-16 lead after another OSU attack error as the Buckeyes called a timeout. Minnesota took a 21-19 lead off a Hart kill, which led to OSU’s second timeout. The Gophers later closed out the set on back-to-back Samedy kills for a 1-0 lead.

Second Set: Minnesota had 38 kills and hit .474 en route to another 25-22 set win. Lohman added a kill for an 8-5 lead, while Martin later pushed the Gophers lead to 13-10 off a kill. OSU tied up the set at 17-17 on a block and later took the 18-17 lead off a kill as Minnesota called a timeout. The two teams tied through 22 before Minnesota took a two-point lead off a Hart kill, while Samedy and Lohman combined for a block as the Gophers took a 2-0 lead.

Third Set: The Gophers finished off the sweep with a 25-19 set win. After the two teams tied it at 3-3, Minnesota controlled the set for the remainder of the set. Lohman added her 500th career block at the 2-1 Gopher lead. A kill by Rosado put the Gophers up, 6-3, while Minnesota took a 10-5 lead as Ohio State called a timeout. The Gophers continued to build the lead as Ohio State called its second timeout at a 17-10 lead. A Lohman ace later put the Gophers up, 21-14. Pittman provided back-to-back kills for a match point, while Hart added the final blow for the 3-0 win.

Ayanna Swan came through with 10 kills on the night. The rookie had a .500 (10-2-16) hitting percentage, a new career high. Luisa Schirmer earned her 14th match of the season in double-digit kills (13). Taylor Hughes did a little bit of everything on her way to 31 assists, eight kills and six digs.

SET 1: The Buckeyes had a 5-2 lead to open the match. Minnesota quickly closed the gap and tied the score 11 times before getting ahead, 20-19. OSU fought to get back in it but dropped the set, 25-22.

SET 2: Schirmer tallied seven kills on 13 error-free swings as the team hit .421 in the second stanza. Ohio State trailed 11-7 to get things going. A Hughes-Witte block locked the set at 17-all and Witte followed up with a nice kill to give the squad its first lead, 18-17. The rest of the rally went point-for-point until Minnesota pulled away for another 25-22 victory.

SET 3: The Gophers doubled up on the Buckeyes, 10-5, early in the third. A 5-2 run helped reduce the deficit to 12-10. Minnesota strung together five straight points to send the Buckeyes to their bench. OSU tried to rally but fell short, 25-19.

The Scarlet & Gray will visit Rutgers for a midweek matchup on Wednesday, Nov. 8. First serve is marked for 7 p.m. ET.