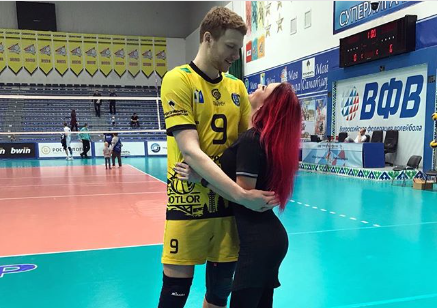 Sergei Piranein has had a big year. The 22-year old opposite was signed to play with Yugra-Samatlor Nizhnevartovsk in the Russian Superleague in December and on March 8, he proposed to his girlfriend at the team's arena.  Current Photo via Marina

Sergei Piranein has had a big year. The 22-year old opposite was signed to play with Yugra-Samotlor Nizhnevartovsk in the Russian Superleague in December.

Now, Piranein is nailing things down in his personal life, proposing to girlfriend Marina at a romantic dinner at Domashnata Arena on March 8.

“The offer in the volleyball hall is something of fiction. We were just two. It was so beautiful, so cool. I couldn’t imagine anything like that. The excitement (took my breathe away) and I was lost in what to say. But everything that was done for me on this day will remain forever in my heart. I’ll be your wife. Best. Thank you, my husband.”