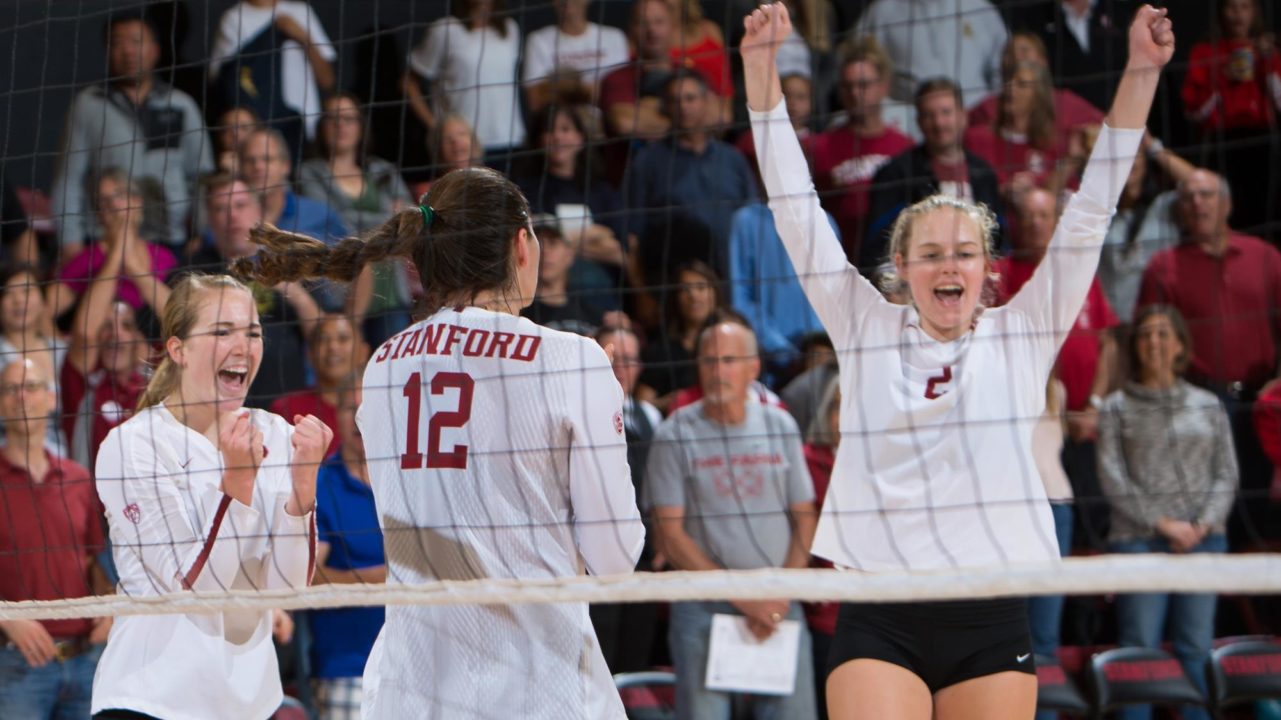 Our follow-up to the scouting report of then-#3 Stanford at then-#12 USC shows what worked for Stanford and what needs improvement from USC. Current Photo via Al Chang/Stanford Athletics

This is part two of a two-part regular series we feature at VolleyMob where we break down the best match of the week. I had the opportunity to write the first part of this scouting report, in which I discussed what would work for each team to win and what might not work if they lost. You can read that article here. A basic breakdown of the match can also be found here.

With Stanford’s four-set victory, the Cardinal gain the initial bragging rights of leadership of the Pac-12. The VolleyMob rankings reflect their victories over UCLA and USC last week; they’ve moved up to #2 in our Power Rankings.

WHAT LED TO A CARDINAL VICTORY?

So the Women of Troy finally found a weakness in the 6-6 outside’s armor. Make her work, make her pass, make her defend. The work piled up for the sophomore, as she hit well below her five-kill-per-set average and totaled 13 kills in four sets. It also took her 41 swings to do so—-nearly double that of any other player on Stanford. The attention on Plummer, however, led to openings for multiple other players, including 6-8 Merete Lutz (15-1-23, .609) and 6-6 Audriana Fitzmorris (11-3-22, .364). The Cardinal certainly have no shortage of size. Size didn’t mean much, though, when 6-6 Plummer was solo blocked by 6-0 Niki Withers.

I alluded to Stanford’s defense in my earlier SR, and I’ll say it again: defense wins championships. They outblocked USC 11.5-8 and limited USC’s normally efficient attack to 50 points below its average. Their 3.5 blocks in set four alone is above the Cardinal’s average. Even though the Women of Troy outdug the Cardinal (47-37), Stanford’s serve receive (which is technically a team’s first line of defense and first contact) was exceptional, limiting USC to only 3 aces and remaining in system to keep the Pac-12’s top offense hitting above .300.

WHAT DID USC DO WRONG? CAN IT BE FIXED?

I, for one, did not see the breakdown of their serve receive coming. USC allows less than one ace per set, and I did not forsee their serve receive breaking down, thereby making the offense predictable. Khalia Lanier, the Plummer of USC, needed 44 swings to get 14 kills on the day. If foreshadowing tells us anything, Stanford’s first two points were two unforced errors by Lanier. But the errors don’t come if serve receive is a bit more in-system.

6-2 offenses traditionally bring more attackers and more consistent blocking. To their defense, USC blocked a taller team well, and actually blocked above their average, albeit slightly. USC also had four attackers in double-digit kills (Lanier, 14; Abercrombie, 12; Withers, 11; Ford, 10). So where are the other two? Jordan Dunn blocked well (4 blocks), but was set a total of 6 times in her 4 sets of play. Who could have been the sixth attacker?

I do not fault USC for this loss. Stanford simply has too many weapons. Before the NCAA tournament happens, however, USC needs to find a way to incorporate additional attackers into their offense.

Plummer was extremely ill which may have also been a factor.