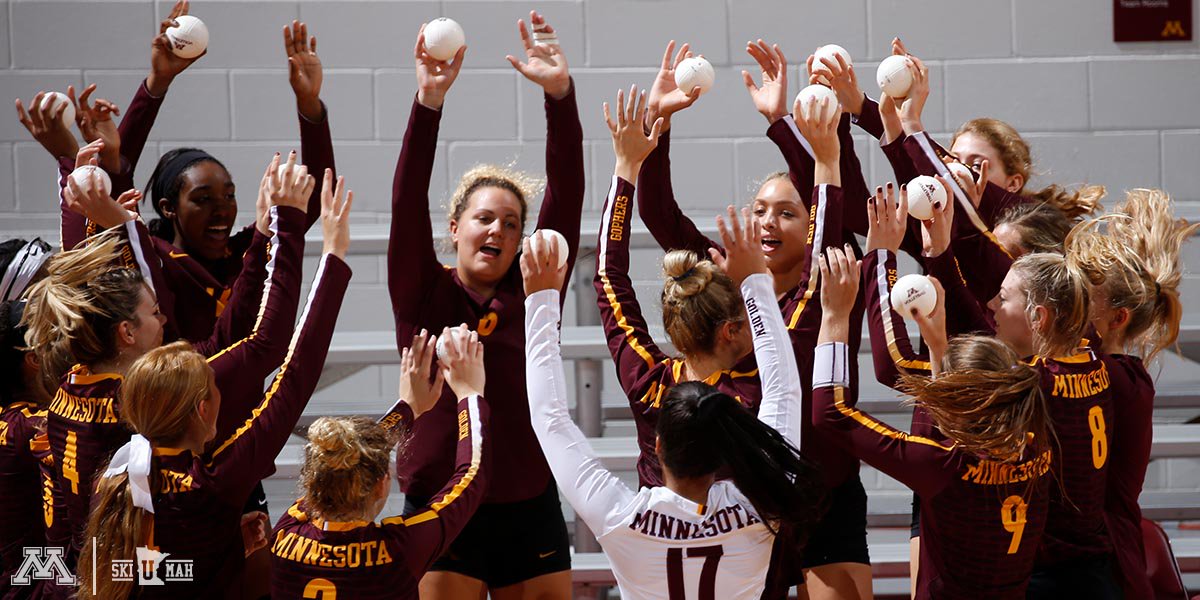 Coming off top-25 Big Ten Conference victories, we break down the match between (RV) Michigan State and #3 Minnesota. Current Photo via Minnesota Athletics

This is the first of a series of forums dedicated to giving you a more in-depth look at the biggest matchups of the week. With Minnesota staying in the top 5 and Michigan State coming off an upset at Wisconsin on Friday night, we felt this would be an epic match to keep an eye on.

With major graduation hitting the Gophers, Minnesota had to find replacements, and in a hurry. Not unlike most teams in the Big Ten, the Gophers merely looked down the bench and reloaded. 6-2 sophomore opposite Stephanie Samedy (4.43 kills/set), 6-0 sophomore outside hitter Alexis Hart (3.24 kills/set) and 6-5 redshirt freshman Regan Pittman (2.29 kills/set) produce the lion’s share of the offense. Add 6-3 senior middle blocker Molly Lohman (1.85 kills/set, 1.42 blocks/set) and you have a formidably productive and big front court at all times run by All-American Samantha Seliger-Swenson (12.31 assists/set, second in the NCAA).

Early-season matches are considered a regular part of the Gopher’s preparation for the grind that is the Big Ten schedule. Preseason wins over North Carolina, Louisville, and Texas (in Austin) helped set up their undefeated (so far) season. Add their Friday night home win over #20 Michigan, and one can see how coach McCutcheon readies his squad.

Like any successful team in the Big Ten, recruiting consistently big and fast athletes is the key to Kathy George’s success. Michigan State’s SHORTEST attacker is listed at 5-10, yet Autumn Bailey is a high-flying starter in the Spartan’s offense. Add 6-6 Brooke Kranda, 6-2 Holly Toliver, 6-4 Alyssa Garvelink and 6-2 Rachel Minarick to the mix, and Michigan State will not be outsized by too many teams in the country, let alone the Big Ten.

When things go wrong, you need leadership. You need someone who has a been-there, done-that attitude can lead through the tough stretches of the grind that is the Big Ten Conference schedule. The Spartans currently have seven true seniors or redshirt seniors on their roster, the most in the Big Ten. Among those seniors are the top four attackers in kills per set (the aforementioned Kranda, Toliver, Bailey and Garvelink, in that order), the starting setter (Minarick), the top ace producer (also Minarick), and the top three blockers (Garvelink, Kranda and Megan Tompkins, all over a block per set). Bailey also leads the team in total digs.

I watched Minnesota’s third set against Boise State, the only team to push the Gophers to five sets this season. Boise is clearly the smaller team, even on film. Boise won this set (and the fourth) by doing two things:

All but one of the Bronco’s kills in set three of that match came either off of the block or landed in the deep corners. BSU continued that trend in the fourth, exploiting Minnesota’s inability to close the block regularly. Using this method, BSU had 39 of their kills in sets three and four alone.

Any time Boise State brought a tough serve with pace, it may not have aced the Gophers, but it kept them from running their ultrafast offense to the pins. When in system, Seliger-Swenson rarely sets the ball above the height of the antenna. That makes it nearly impossible to put more than one blocker up; an easy win for any attacker.

In their loss to Georgia Tech, Michigan State led in every statistical category except for blocks. And yes, I did mention that Michigan State is significantly taller than almost every team they play. However, in that match, they committed 14 service errors and 18 unforced attack errors (GT had 12 blocks in the match). That’s 32 points MSU gave away for free to a team with no player taller than 6-2. On the season, Michigan State is averaging over two missed serves per set and five hitting errors per set. That’s over 7 points given to opponents.

Errors happen. But if you can control the amount of errors you can self-correct, you can control the outcome. This match will test Michigan State in every way possible. The discipline to minimize self-inflicted wounds will definitely be one of them.