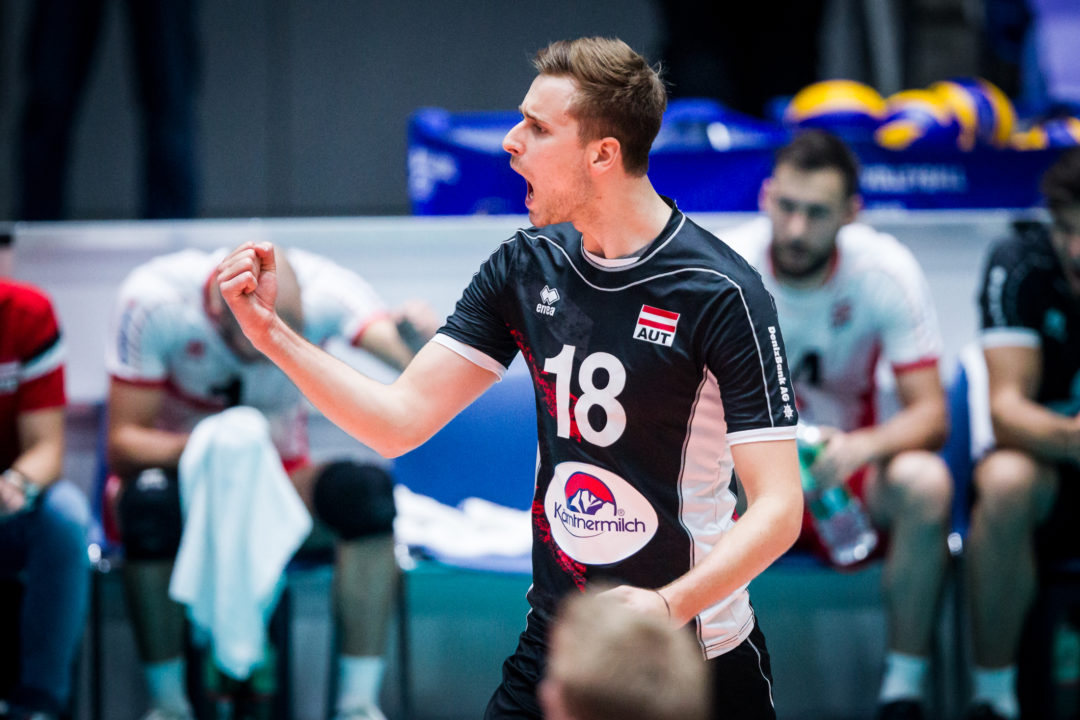 Buchegger was injured in a match with the Austrian National Team during European Championship qualifying on Saturday. Archive Photo via FIVB

22-year old Austrian opposite Paul Buchegger, one of the big pickups for Italian pro squad Monza this off-season, is expected to miss at least the next 5 months after suffering a knee injury on Saturday during Austria’s 3-1 win over Portugal in European Championship qualifying.

Buchegger went down in the 3rd set of the match, and the Austrian federation announced on Sunday that Buchegger would undergo surgery and was expected to miss 5 months. The team was playing at home, in Vienna, and so Buchegger was first sent to a hospital in Zwettl, the town of 11,000 where the match was being played, to the Rudolfinerhaus hospital in Vienna. He consulted with knee specialist Dr. Lukas Bradner, and spent the night in the hospital. An MRI on Sunday, the day after the injury, found a torn meniscus.

Buchegger and the medical staff decided to sew the torn meniscus, which means a much longer recovery time, but should extend his career. From injury to surgery was just a 12-hour turnaround.

“Paul has made a significant contribution through his performance and also his appearance, that we now have such good chances to qualify for the European Championship,” team manager Michael Warm said of the news. “His injury on Saturday in Zwettl was of course a tough blow for everyone. We are now keeping our fingers crossed for him to emerge stronger from the injury in the end.”

Not wasting any time, Buchegger has already been cleared to begin his rehab on Tuesday at the Olympic Center in Linz.

Monza sports director Claudio Bonati also released a statement on Monday saying that he was monitoring the situation and keeping in touch with the medical staff in Austria. He closed with a jabbing remark of “for the moment, therefore, we prefer not to lose our balance unlike what we read in some newspapers.”

Prior to the injury, Buchegger amassed 17 points, which even without playing the last set-and-a-half was the top output for Austria in the match. He was replaced by Thomas Zass, who picked up the scoring load in short order with 15 points in just a set-and-a-half, including 13 kills on 27 swings.

World #48 Austria currently ranks 2nd in Pool D, behind Portugal, thanks in part to an upset 3-2 loss at the hands of world #118 Albania. The winners of each of 7 pools in the qualification tournament advance to the 2019 European Championships, as do the 5-best runners up.