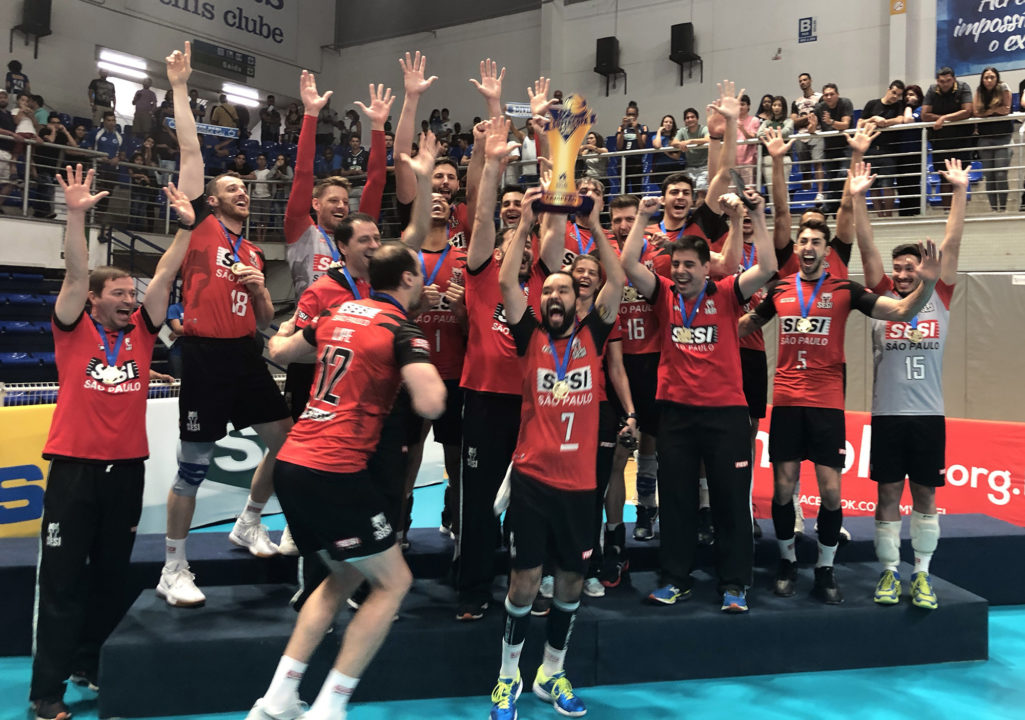 Brazil's Supercup gathered two of the country's best teams, Sesi and Cruzeiro, in what served as a luxurious preview of what fans can expect in Superliga. Current Photo via CBV

Brazil’s Supercup gathered two of the country’s best teams, Sesi and Cruzeiro, in what served as a luxurious preview of what fans can expect in Superliga. Sesi waltzed into Arena Minas, although not technically Cruzeiro’s home, but very close to it, and gifted its opponent a 3-0 win (25/22, 25/19 and 25/22) to open up Brazil’s domestic season.

Sesi was helped by its trio Olympic champions (Lipe Fontelles, the 4th, is still nursing an injury): William Arjona, Eder Carbonera, and Murilo Endres, as they were just too much to handle by Cruzeiro’s Evandro Guerra, himself an Olympic champion, and French superstar Kevin Le Roux. Sadly for Cruzeiro, Taylor Sander didn’t dress up for the match. The Brazilian Supercup has been played since 2015 and this is the first time that another team besides Cruzeiro has won it.

Eder, who turned 35 years old just one day prior to the match, celebrated the title, which served as a well-timed gift:

“The team played very well today. We studied Cruzeiro well, Rubinho gave us very precise information, and we were expecting a very hard game. We didn’t expect a 3-0 score, but we managed timely stops against their team and we are now leaving Minas with a very important victor to start the season. I turned 35 yesterday, so this was a nice birthday present, which my family and myself liked a lot.”

Coach Rubinho and Sesi’s opposite Alan Souza also spoke about the title:

“We were able to accomplish what we wanted in the game. We managed to work well in blocking, defense and created opportunities for points. In addition, we maintained a consistent line of play and this is always the most important. We managed to maintain this standard today and I think this is the way to victories.”

“I am very happy to have managed to play well, as well as the whole team, which did very well today. We made few mistakes, hit the serve and block hard, which was what we had planned. We did everything that was agreed upon, and we were victorious exactly because of that.”

Meanwhile, Cruzeiro’s captain Filipe Ferraz made it clear the result was to be expected, as the team is building itself back up again after losing Nicolas Uriarte, Yoandly Leal, and RobertLandy Simon in the summer’s transfer window:

“It was a difficult game. We knew it would be complicated. The Sesi-SP came from a beautiful Paulista Championship, while we have only played seven games into our season so far. They arrived with a faster pace and sport a roster that is mostly exactly the same as its last year team. We had to change three important pieces, a setter, a middle, and an outside hitter, and this is difficult to deal with. But that is part of the game, we are just at the beginning of the season and Superliga is right around the corner.”