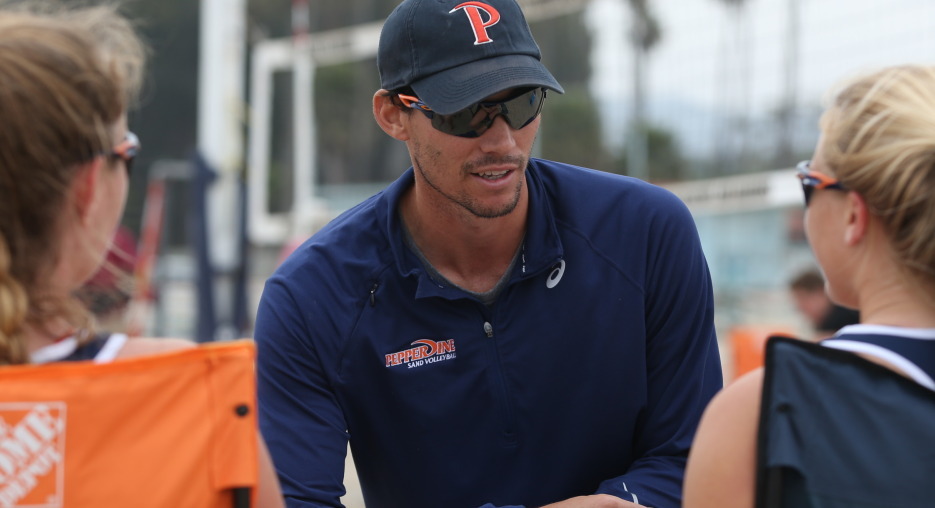 Head Coach Marcio Sicoli added a familiar face to the coaching staff for the 2018-19 campaign, hiring former volunteer assistant Jon Dazé as Assistant Coach. Dazé was a member of the coaching staff that led the Pepperdine beach volleyball program to its second AVCA National Championship crown in 2014.  Current Photo via Pepperdine Athletics

MALIBU, Calif. – Head Coach Marcio Sicoli added a familiar face to the coaching staff for the 2018-19 campaign, hiring former volunteer assistant Jon Dazé as Assistant Coach.  Dazé was a member of the coaching staff that led the Pepperdine beach volleyball program to its second AVCA National Championship crown in 2014.

“I am excited to bring Jon Dazé back on staff,” said Sicoli.  “We have a great partnership that includes a bronze medal finish at the 2016 Olympic Games in Rio and previous success with the Waves’ beach program.  Jon, Delaney [Knudsen] and I have a ton of work to keep this program in a top position without Nina [Matthies], and this team is up to the task.”

Since 2013, Dazé has been coaching with USA Beach Volleyball and since 2001 he has been coaching at either the club, collegiate or professional level for both indoor and beach volleyball.  In 2016, he served as an assistant coach to Sicoli for the duo of Kerri Walsh Jennings and April Ross, helping coach the pair to a bronze medal at the 2016 Olympic Games.

“I could not be more grateful for this opportunity to return to the Pepperdine beach volleyball program and continue to uphold the rich tradition of excellence,” said Dazé.  “It’s such a blessing to be a Wave and I want to thank Dr. Steve Potts, Karina Herold and Marcio Sicoli for welcoming me as an assistant beach coach.

“Furthermore, I want to congratulate Nina Matthies on her outstanding Hall of Fame career and for paving the way for so many people in our sport as a hallmark example.  Thank you Nina!”

Most recently in 2018, he was the assistant coach for Kerri Walsh Jennings and Nicole Branaugh and the head coach for Bill Kolinske and Miles Evans.  In 2017, he was the head coach for April Ross and Lauren Fendrick, helping coach the pair to a silver medal finishes at the World Championships in Vienna, Austria and the FIVB Long Beach World Series, while also helping led the team to AVP New York Champion status.

On the men’s side in 2017, he served as the head coach to Billy Allen and Stafford Slick, helping the pair to an AVP Seattle Championship and finals appearances at the AVP New York and San Francisco tournaments.

Prior to his stint on the professional and Team U.S.A. side of things, Dazé served as Pepperdine beach volleyball team’s volunteer assistant from 2012-15, helping lead the program to the second AVCA National Championship title along 2013 AVCA National finalist and 2015 AVCA Final Four finishes.

While also coaching at the professional beach level, Dazé also coached at the high school and club levels, acting as the Varsity Head Coach and Program Directory at Marlborough School for the girls indoor volleyball team from 2017-18.  He acted in different facets at the club or high school level as either head coach or director capacities at Sports Academy, Actyve Volleyball Club and Laguna Beach Volleyball Club from 2001-18.

He coached in brief stints at Santa Monica College for the men’s indoor squad helping the team to a State Tournament Final Four appearance for the 2015-16 season.  From 2011-12, he was the assistant coach for Irvine Valley College men’s indoor team and from 2009-11, he served as either the Associate Head Coach of Interim Head Coach for Concordia University, Irvine’s women’s indoor squad.

Dazé earned a Master’s Degree in Education Psychology from Pepperdine in 2015 and earned a Bachelor of Arts in Human Development from UC San Diego in 2007.