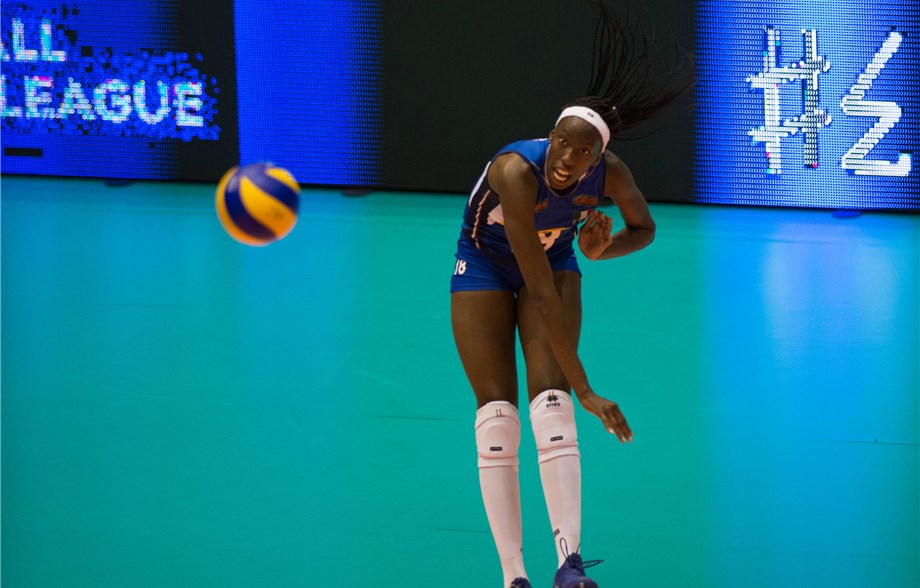 Italy overpowered Serbia offensively with help from a 28 points effort by young star Paola Egonu in a five-set win on Tuesday, the Italians third straight VNL victory, while the Netherlands took advantage of 20 Dominican Republic miscues in a home sweep. Current Photo via FIVB

Italy overpowered Serbia offensively with help from a 28 points effort and 24 kills by young star Paola Egonu in a five-set win on Tuesday, the Italians third straight victory.

Egonu added a team-leading four blocks to her match-high 24 kills to pace Italy. Elena Pietrini and Lucia Bosetti chipped in 14 and 11 points respectively and Anna Danesi tacked on nine. Pietrini served up a team-leading five aces and added nine kills alongside Bosetti, while Danesi turned in three blocks, five kills and an ace.

Tijana Boskovic did all she could to lead Serbia with 26 points on 23 kills, two blocks and an ace. Milena Rasic was next with 14 scores on six kills, six blocks and two aces. The team clearly missed outside hitter Brankica Mihajlovic, who is out with a knee injury, but Stefana Veljkovic (8), Jelena Blagojevic (6), Bojana Milenkovic (5) and Ana Antonijevic (4) tried to fill the void. Antonijevic served up a team-best three aces, while the rest of the group added five or more kills.

Cristina Chirichella and the Italian block gave the team a 6-3 lead in the decisive fifth set. Egonu and Pietrini teamed up offensively to make it 12-8. In the end, Egonu stamped the final seal on the 15-13 victory to hand Serbia its second VNL loss.

Serbia scored the first four points of the match and upped the advantage to seven at 11-4 and carried on to a 25-19 win behind Boskovic.

Italy found itself down early in Set 2 but opened up a five-point gap midway through at 13-8. The margin was down to just two at 16-14, but Egonu took over and guided Italy to a 25-21 victory to even the match.

Serbia grabbed the early momentum in Set 3, leading 8-3 and continued on to a 16-11 edge, but Italy rallied to a 25-21 behind a strong blocking effort.

Netherlands took advantage of 20 Dominican Republic miscues in a home sweep of Tuesday.

Lonneke Sloetjes tallied 18 points, including a team-best 16 kills, to lead a group of five players with six or more putaways. Sloetjes also served up a team-best two aces. Yvon Belien and Celeste Plak chipped in nine kills apiece, while Maret Balkestein-Grothues added seven and Juliet Lohuis rounded out the scoring with six putdowns.

Brayelin Martinez led all scorers with 19 points, all on kills, while Yonkaira Pena Isabel racked up 11 points with nine putaways and two aces. Jiniery Martinez added seven points on five kills and two blocks to aid the DR effort.

After falling behind 8-6 in the opening set, Brayelin Martinez lifted the Dominican Republic to a 16-15 advantage. The Dutch answered with a 4-0 run and Sloetjes closed out a 25-22 win.

The Netherlands again took the early lead, with five of the first seven points in Set 2, but the DR again rallied, tying it up at 15. Sloetjes and Balkestein-Grotheus contributed as the Dutch outscored their foes 10-6 down the stretch.

The Dominicans scored the first three points of Set 3, but soon faced a 9-5 deficit. The margin swelled to seven at 15-8 and the Dutch wrapped up the match at 25-18 on a Femke Stoltenborg putaway.