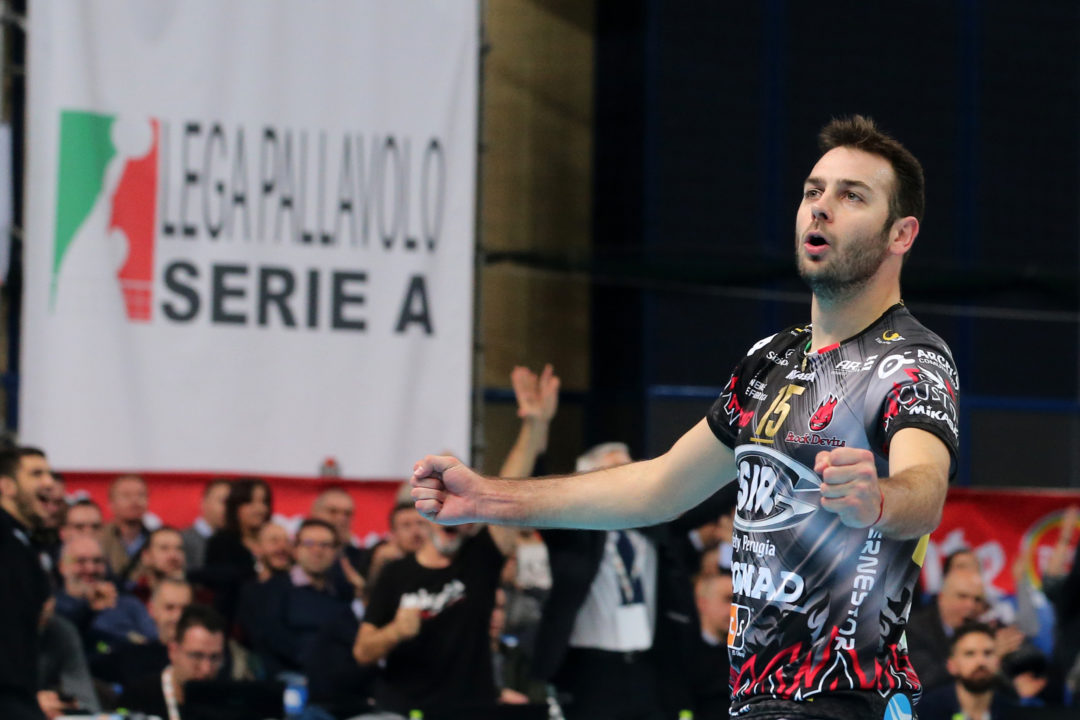 Lube Civitanova avenges their loss from last weekend as they advance to the Italian Cup finals along with Sir Safety Cand Perugia.  Current Photo via legavolley.it

This morning 5000 fans packed the stands of the PalaFlorio in Bari to see the best club teams of Italy go at each other in a single-elimination tournament. Italy has the reputation of having one of the deepest pro leagues in the world, and the level of play seen today was tough to beat.

After a first set in which Modena dominated Lube 25-17, it looked like this was going to be a repeat of last week’s matchup between these two teams, where Modena won 3-0. Two events changed the course of the match quickly.

The first was an ankle injury to Modena opposite Andrea Argenta after he landed on teammate Daniele Mazzone. argenta left the game after going a perfect 8/8 on hitting, and after his departure, no one on Modena except Earvin Ngapeth could get a rhythm going.

The second event was the substitution of Taylor Sander and David Candellaro in for Jiri Kovar and Dragan Stankovic for Lube. Because of the league’s foreign player limit, there must be 3 Italians on the court at a time, hence the reason for the double substitution. Sander’s powerful attacking and Candellaro’s precise blocking gave Lube the edge they needed.

This match went even more poorly for Trentino than predicted. Not that they were expected to win mind you, but at no point in the match were they even in a position to take a set. Perugia put on a clinic of how to play top-level volleyball, outscoring Trentino 25-8 on break points, hitting at a 54% kill efficiency, and taking on 9 blocks and 6 aces just for good measure. Especially impressive was Aleksander Atanasijevic, whose cball cut shot might be the most unstoppable hit in volleyball when he can perform it with consistency.

Looking towards tomorrow’s finals match, the game will be won or lost at the service line. Perugia might be the only team in volleyball where every player spin serves, but they are facing an elite reception squad of Osmany Juantorena, Taylor Sander, and superstar libero Jenia Grebennikov.