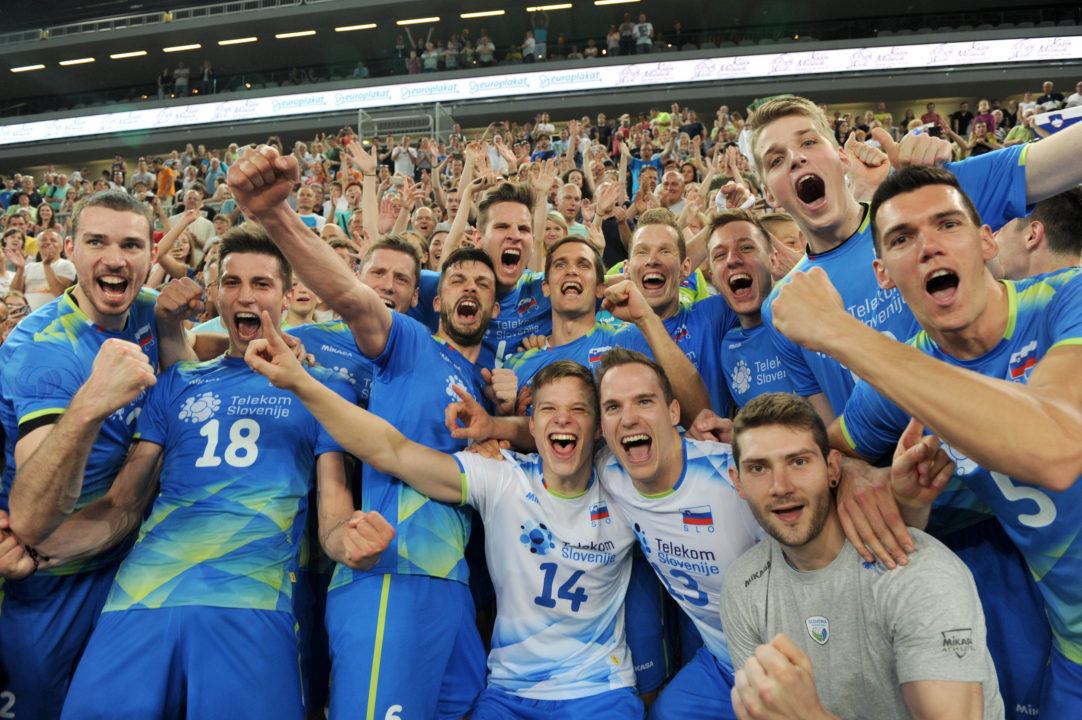 Slovakia is one of 6 teams to have confirmed their spot in the 2018 World Championships on Sunday. Current Photo via FIVB

At the conclusion of Sunday’s play in the second round of the European qualifier for the 2018 men’s FIVB World Championships, 6 more teams had earned their spot for the 24-team field.

France (Pool A), Netherlands (Pool B), Slovenia (Pool C), Russia (Pool D), Serbia (Pool E) and Finland (Pool F) each won their pools, which will qualify them forward to the World Championship final next year, co-hosted by Italy and Bulgaria.

That makes now 9 teams qualified for the World Championships – all from Europe so far. The 6 teams qualified on Sunday join co-hosts Italy and Bulgaria, as well as Poland, who qualifies automatically as the defending champions.

Now 6 teams will go through to the third, and final, opportunity for European teams to claim their 10th spot. The 6 group runners-up will play in one final pool, the winner of which earns the final European spot for the World Championships.

Slovenia and the Netherlands are the new additions to the bunch – neither competed in the 2014 World Championships. For Slovenia, this will be their first-ever appearance at the World Championships. Conversely, this means that either 2014 Worlds bronze medalists Germany or Belgium will be eliminated from competition before reaching next year’s final tournament. Germany, at #11 in the world, are the highest-ranked team to have to play in the 3rd round of qualifying.

The highest-ranked team in the world eliminated in the second round qualifier was FIVB #22 Turkey, who finished 3rd behind France and Germany in Pool A.

The next continent to award spots will be Asia, who have their first qualifying tournament in July – the same month as Europe decides its final team. Asia wraps their qualifying in August, while South America will qualify in August and September. NORCECA will annoint their 5 teams in September and October, while Africa ends the qualifying period with their tournament in October.