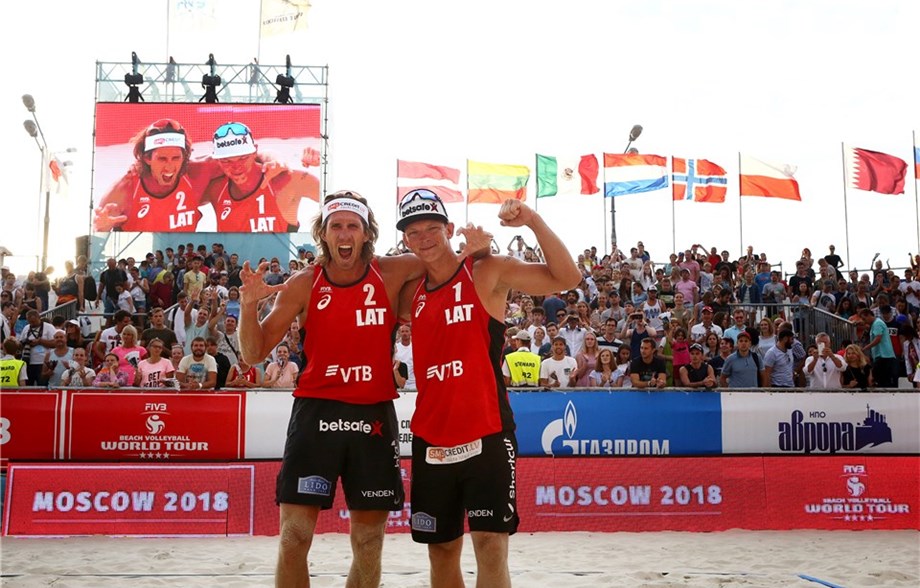 The gold was the duo’s first since winning the Espinho Four Star on July 8, and marked the 10th FIVB title for the pair, which has played together since 2013. The medal was their fourth on the FIVB World Tour in 2018 and fifth overall including a runnerup finish at the CEV European Championships (July 22). The Latvians earned bronze medals at the Warsaw Four Star (July 1) and Fort Lauderdale Major (March 4).

“They are such a good team with Olympic and World Championships gold medals between them,” Samoilovs said. “They started really well and then they lost their rhythm and we just focused on the next point and that meant everything went well for us.”

No. 13 seeded Alison/Andre teamed up in June after splitting with partners Bruno Schmidt and Evandro Goncalves Oliveira. The pair had finished as high as fifth at the Warsaw Four Star on July 1, but had not been able to break onto the podium until now. The Brazilians were looking for their first medal in their sixth tournament as a pairing.

The podium finish is the third of the year for the Russians, who won the Xiamen Four Star on April 22 and were runners up at the Doha Four Star on March 10. Stoyanovskiy won bronze in Moscow in 2017 with then partner Artem Yarzutkin.

“It a big honour for me to play here in front of my friends and family and a special moment to win a medal,” Stoyanovskiy said. “It is the second year in a row as I won bronze here last year and I’m very happy. They are a really good team and Evandro is a world champ, so we prepared well for them and we did what we trained to do.”