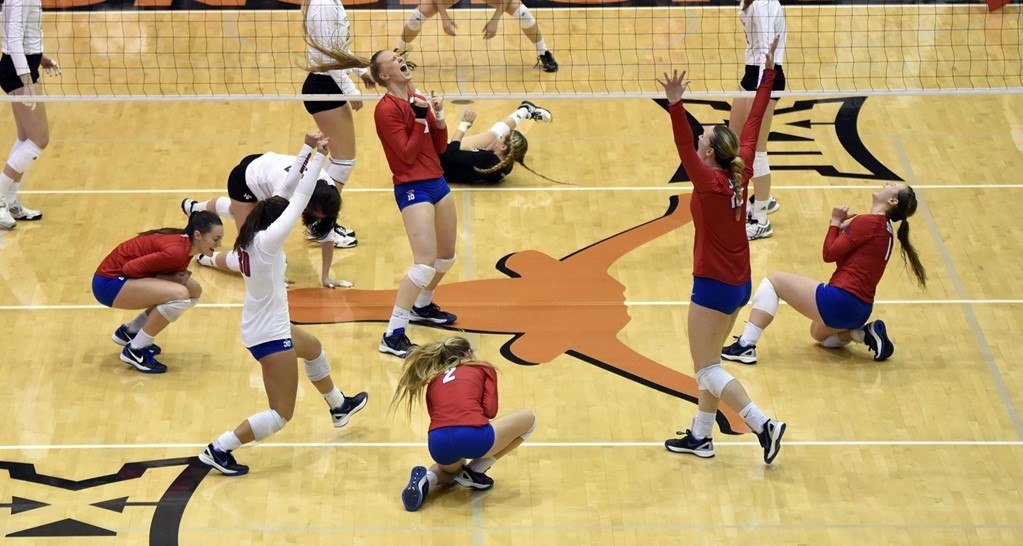 SMU became the first AAC team to win a match in the NCAA Volleyball Tournament.

Katie Hegarty led SMU with 14 kills and five blocks. Kristen Stehling and Janelle Giordano each contributed 10 kills, while Morgan Heise picked up 20 digs in the back court.

Hollann Hand put down 13 kills, while Kaitlyn Blake and Jazzmin Babers each added 11. In the back row, Amy Nettles picked up 18 kills.

AUSTIN, Texas (SMU) – The SMU volleyball team defeated Texas A&M in straight sets (25-23, 25-23, 25-18) to advance to the second round of the NCAA Tournament in Austin, Texas. Katie Hegarty matched the SMU postseason record with 14 kills to lead the Mustangs, who improved to 26-7 overall. The Aggies fell to 21-9 with just their second first-round loss in the last seven tournament appearances.

“I’m just so incredibly proud of the way that we worked all season,” SMU head coach Lisa Seifert said after the match. “I think we came into early August during our two-a-days and pretty much questioned what was going to happen. We didn’t know for sure who was going to run our offense, or what our offense was going to be. We had to fill some spots in the left side and we just turned it up since then. The last eight to ten matches have been some of our best. This particular match that we just played, in my opinion, was our best.”

SMU became the first American Athletic Conference team to win an NCAA Tournament match, improving to 1-1 in the postseason after a 3-1 loss to Purdue in the first round in Austin in 2015. This was also the first meeting between SMU and Texas A&M.

In the third set, SMU went on a 7-1 run to take a 17-11 lead. The Aggies scored four straight to get to within two, 17-15, but the Mustangs made sure the opportunity to end the match as early as possible didn’t slip away. SMU went on a 7-1 run to stretch the lead to eight, 24-16, matching its largest lead of the contest. The Aggies scored two points before Janelle Giordano smashed her 10th kill of the match to secure the victory with the 25-18 win.

The Mustangs held off a late charge by the Aggies to win the first set, 25-23. SMU scored five of the first seven points in the set, and continued the run to take a 13-5 lead, scoring three straight after a Texas A&M timeout to cap off the rally. Once the Aggies ended the SMU run with their sixth point of the set, they scored four straight to start an 8-1 run, cutting the lead to one, 14-13. The Mustangs answered with a 4-0 run to recapture the momentum, taking an 18-13 lead and forcing Texas A&M into its second timeout. With SMU leading by five, 20-15, the Aggies went on a 5-1 run, cutting the lead to one once again, 21-20. SMU led 24-21 after back-to-back kills, but the Aggies fought off two set points before Mills scored to give SMU the 25-23 win.

SMU took a 2-0 lead in the match with a 25-23 win in the second set, again edging out the Aggies late in the set. Texas A&M called timeout trailing by two, 19-17, and quickly tied the score with a pair of kills. The score was still tied, 22-22, but Mills again answered the call with a kill on SMU’s second set-point attempt, giving SMU the 25-23 win. After the two teams traded points on each of the first 18 serves, SMU scored three straight to take a 12-9 lead. Texas A&M later scored four unanswered to take a 15-14 lead. Once the Mustangs recaptured the lead, 18-17, the Aggies never led again.

The Mustangs advance to play Texas in the second round Saturday at 7 p.m. The match will be carried by the Longhorn Network, and can be seen online on ESPN3 with a Longhorn Network subscription. The Longhorns, seeded fourth in the tournament overall, advanced with a 3-0 win against UT-Rio Grande Valley.