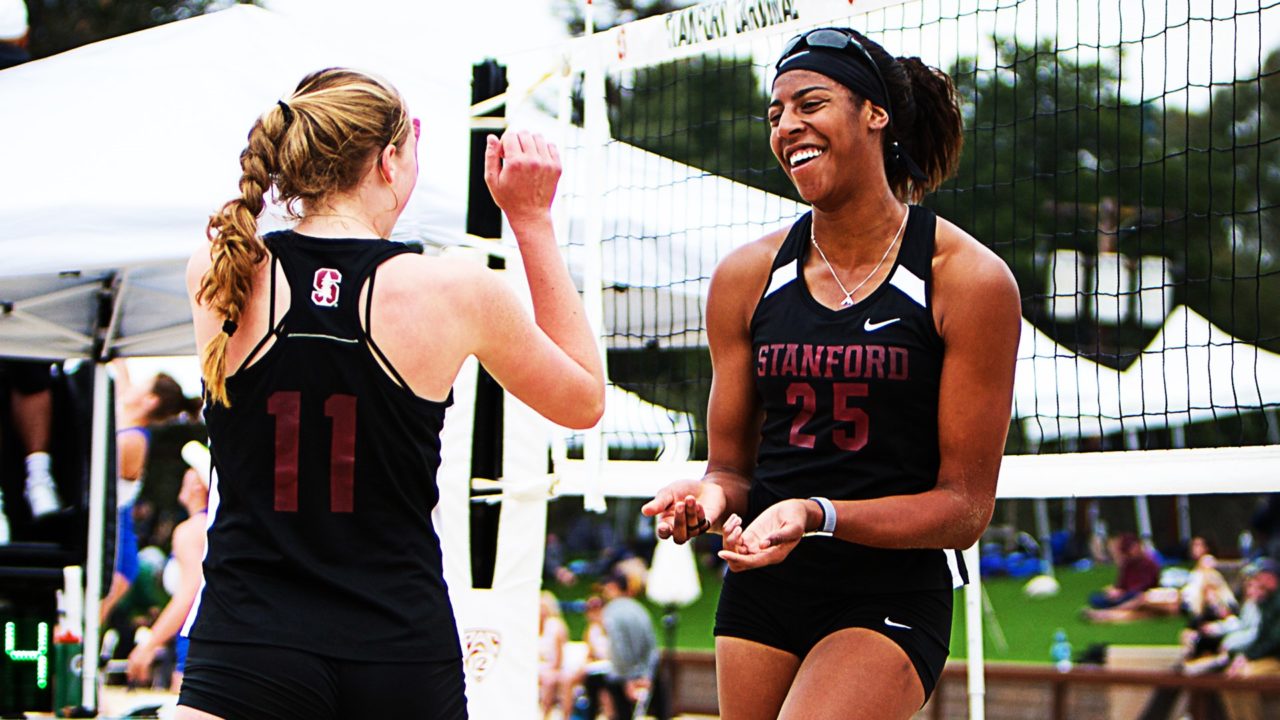 No. 13 California was a part of both of the Top 20 upsets in Sunday's beach action. The Bears first edged out No. 4 USC 3-2, before falling to No. 14 Stanford by the same score later in the day at the Pac-12 North Invitational. The Cardinal wrapped up the day with a 5-0 win over Washington. Current Photo via Stanford Athletics

No. 13 California was a part of both of the Top 20 upsets in Sunday’s beach action. The Bears first edged out No. 4 USC 3-2, before falling to No. 14 Stanford by the same score later in the day at the Pac-12 North Invitational. No. 5 pair Grace Campbell and Maddie Micheletti won in both contests, moving to 22-1 on the season and 4-0 on the weekend en route to all-tournament team honors.

Stanford finished out the day at 2-0 with a 4-1 win over Washington. Court 2 duo Courtney Bowen and Sunny Villapando hung on for a 26-24, 28-30, 15-10 win in the upset of Cal and followed that with a straight-set win over Washington to seal that victory. The duo earned all-tournament honors for its efforts.

No. 3 Hawaii wrapped the regular season with a pair of wins with 5-0 blankings of Arizona State and Boise State. The Rainbow Wahine extended their team win streak to 27 matches, while celebrating senior day for seven players, including No. 1 duo Ka’iwi Schucht and Emily Maglio. The day was especially unique for the pair, who registered their school record 23rd-straight win, and for Schucht in particular, who tallied her 100th career victory.

No. 6 Long Beach State finished out its home tournament with a 5-0 win over No. 16 Loyola Marymount with all straight set wins. In the night cap, the 49ers downed Utah 4-1 including the 80th career win for No. 2 Rachel Nieto.

No. 7 Florida State and No. 11 Georgia State grabbed a pair of wins at the Battle on the Bayou in Baton Rouge to close out the day’s action.

The Seminoles topped No. 8 LSU 3-2 and Jacksonville State 5-0 to wrap up the CCSA season with a perfect 10-0 mark and earn the league tournament’s top seed. With two victories, No. 1 pair Tory Paranagua and Vanessa Freire put their names in the record books. Paranagua moves to 94-24 in dual matches, setting a program standard, while Freire joined Paranagua in the 100 wins club at 101-33, making her the sixth Seminole ever to reach the century mark.

“We had a really great weekend,” head coach Brooke Niles said. “We had to battle weather delays and some tough competition, but our teams all performed really well.”

Meanwhile, the Panthers bested New Orleans 5-0 and rallied to down TCU 3-2 to close out the regular season. After trailing 2-0 to the Horned Frogs, Georgia State won on courts 1, 2 and 3 to steal away the win. No. 2 duo Tiffany Creamer and Brooke Weiner also pulled off a comeback, overcoming a 21-11 Set 1 loss to win in a tie-break.