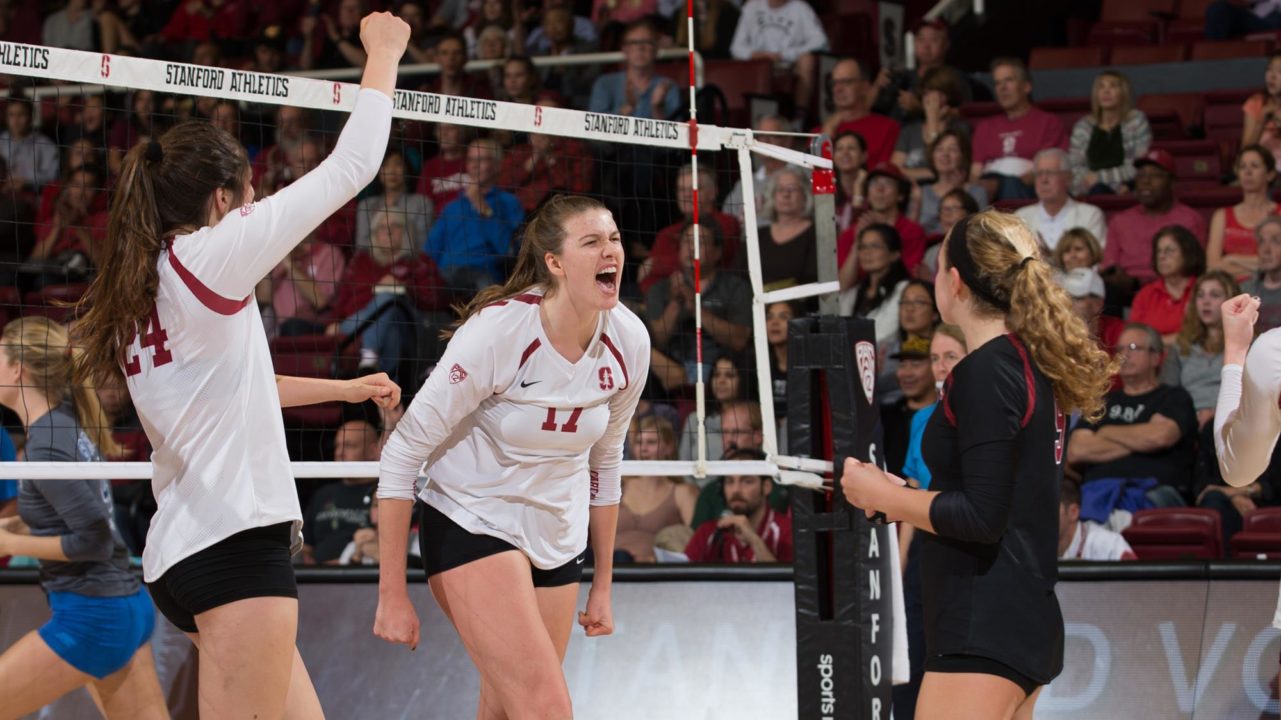 Only one team is still undefeated in Pac-12 play as No. 3 STANFORD enters the week sitting in first place all alone.  Current Photo via Stanford Athletics

• Only one team is still undefeated in Pac-12 play as No. 3 STANFORD enters the week sitting in first place all alone. Six teams are ranked this week in the AVCA Coaches poll and Pac-12 Networks’ Wednesday night Spike Night features a top-15 matchup between No. 14 WASHINGTON and No. 15 OREGON in Seattle.

• Top-25 Matchups … The Cardinal put its unblemished league record and top-three ranking on the line when it makes a road swing at No. 19 USC and No. 12 UCLA this week. When the Ducks travel to Stanford on Wednesday, they will be looking for their first win over the Cardinal since 2011.

• In the National Stats … Three Pac-12 squads are among the top-seven blocking teams in the nation. The Huskies are second in the category (3.40), followed by WSU at No. 4 (3.14) and the Cardinal ranks seventh (3.08). Individually, Washington freshman Lauren Sanders leads the Conference with 1.61 blocks per set which is sixth in the country. Husky teammate Marion Hazelwood is ninth with a 1.57 bpg and WSU’s Jocelyn Urias is 10th with a 1.55 blocks average.

• Three Pac-12 teams are also ranked in the top 21 in the nation in kills per set with Utah’s 14.66 kps leading the Conference and ranking eighth nationally.

• Stanford’s Kathryn Plummer is the fifth-highest points producer in the country, averaging a league-best 5.44 points per set. Her 4.76 kills per set are also ninth in the nation. OREGON STATE’s Mary-Kate Marshall and ARIZONA STATE’s Oluoma Okaro are 13th and 16th, respectively, in kills per set.

• Three of the top-four assist producers in the country are underclassmen with Stanford’s Jenna Gray leading the league with an 11.82 aps. Freshmen Brynna Deluzio of Colorado (11.26) and Shelbie Dobmeier of ARIZONA STATE (11.03) are third and fourth, respectively. Though a senior, UCLA’s Sarah Sponcil is new to the league and ranks second in the Conference in assists per set (11.27).

• OSU’s Mary-Kate Marshall and Utah’s Adora Anae are among the nation’s active leaders in total kills. Marshall enters the week ranked fourth among the NCAA’s active leaders with 1,664, while Anae is sixth with 1,635. That also puts them in the top 41 all-time in Pac-12 history in the category.

• Rivalry Showdowns … The home team went 3-3 in the rivalry matches to mark the start of the Pac-12 slate.