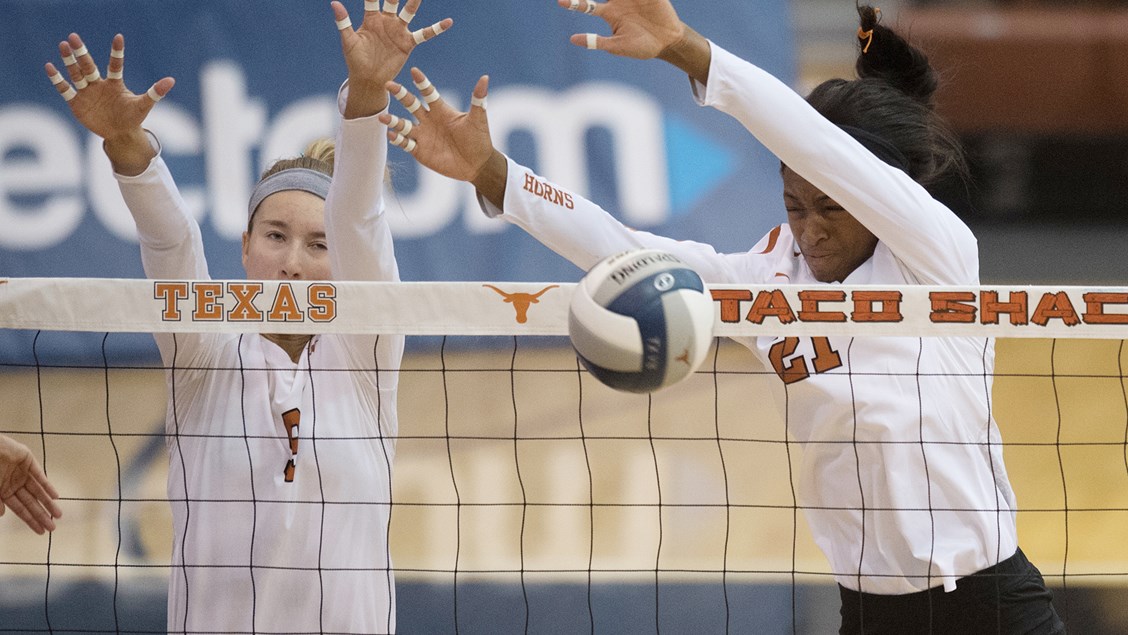 Texas hit .306 on the match, with a .632 clip in the second. They held TCU to a .174 hitting percentage. The Longhorns out-blocked the Horned Frogs 11-5, with Chiaka Ogbogu responsible for nine.

Texas setter, Ashley Shook dished out 28 assists, along with nine digs, two kills and two block assists. On the other side of the net, Lamprini Konstantinidou and Kaylee Smith ran the offense for TCU and notched 19 and 13 assists, respectively.

TCU also had one player with double-figure kills. Abigail Buckingham put away 11 kills on a .400 clip and added three digs and one block assist.

Sophomore Micaya White led the Longhorns with double-digit kills for the 11th-straight match. She finished with 12 kills, only committing three errors on 31 swings, while adding seven digs and two blocks.

Freshman Lexi Sun posted nine kills with only two errors on 17 swings for a .412 hitting percentage.

Senior Chiaka Ogbogu finished with a team-high nine blocks, with Texas outblocking TCU eleven to five and holding the Horned Frogs to a .147 clip.

A competitive opening to the match saw Texas unable to extend a narrow lead, but then go on a 7-3 run to extend to 19-14. Sustaining the advantage with Shook’s seven assists, three digs, and two blocks on the set guiding the Longhorns, Texas clinched the set at 25-22 while limiting TCU to .135 clip.

Transitioning to the second set with a 3-0 start for the frame, the Longhorns forced an early TCU timeout at 6-2 with a kill from White. With Texas finding an offensive stride, Ogbogu’s six blocks on the set marshalled the Longhorns at the net and fueled a ten-point advantage to get to 13-3. Not looking back, Texas took the second set at 25-12.

The home team Horned Frogs opened the third set on top, forcing a Texas timeout on a 17-14 lead. After coming back to tie at 13-13, TCU continued to trade points with the Longhorns up to 19-19. But after three-consecutive TCU errors enabled Texas to establish a narrow lead at 20-19, the Longhorns pounced to take the match, 25-21.

Next up, Texas faces a clash with the No. 11 Kansas Jayhawks in Lawrence, Kansas on Wednesday, Oct. 11. The match will be televised live on ESPNU.

On the match: I thought the match went well. We really focused on executing on our side and making sure we are all doing our individual jobs.

On her blocking: We focused a lot on out of system blocking in practice and we did a good job of talking to each other which made my job easier.

On the match: I thought the match went well. We really focused on executing on our side and making sure we are all doing our individual jobs.

On her blocking: We focused a lot on out of system blocking in practice and we did a good job of talking to each other which made my job easier.

FORT WORTH, Texas – The largest crowd of the season of over 2,000 fans were in attendance on Sunday with the No. 5 Texas Longhorns ultimately coming out on top over the TCU volleyball team with a 3-0 (25-22, 25-12, 25-21) victory inside The Rickel at the University Recreation Center.

Abigail Buckingham led the TCU offense with 11 kills and a .400 hitting clip with Anna Walsh chipping in eight kills. Dani Dennison was good for 12 digs in the match with Berklie Baker picking up nine digs. Lamprini Konstantinidou and Kaylee Smith guided the offense with 19 assists and 13 assists, respectively.

Stat of the Match
2,019 – The number of fans in attendance at the match against Texas which was the sixth largest crowd in program history and the largest of the season.

Quotes of the Match
TCU Director of Volleyball Jill Kramer
Opening Statement
“First of all, I would like to thank our fans for packing the gym today. From my understanding, it was the sixth largest crowd in program history and the largest one this year. Thank you for your time and for being loud and thank you for your support. I thought the first set and the third set our team fought really hard. We played really aggressive at the majority of the time in those sets. In the second set, I don’t think we were aggressive enough in the beginning and we talked about that as a group. You have to be and you have to sustain that for an entire match to give yourself the best chance to compete especially against a team like Texas. They came into a really loud environment and they did a good job. It was a well-played match by them. Lots of different parts of the match were played well by us, but just not enough. We talked about being better for longer and we will keep working on that.”

Notes
-TCU drops to 9-7 on the season and 1-4 in conference action after the match on Sunday against Texas
-Texas picks up win No. 13 in the all-time series and leads TCU 13-1
-The 2,019 fans in attendance were the sixth most in program history and the most this season
-TCU has now had over 2,000 fans in attendance for seven matches in program history
-Abigail Buckingham led the TCU offense for the second time this season with 11 kills in the match
-Buckingham recorded double-digit kills in back-to-back matches for the first time this season
-The .400 hitting clip record by Buckingham marked a career-high
-Lamprini Konstantinidou led the team in assists for the 11th time this season and fifth match in a row
-Dani Dennison led the defense for the 15th time this season with 12 digs in the match
-Dennison has now picked up double-digit digs in 15 matches this season including all five Big 12 matches

Up Next
TCU will have a quick turnaround as they travel to San Marcos, Texas to take on Texas State on Tuesday, Oct. 10 at 6 p.m.