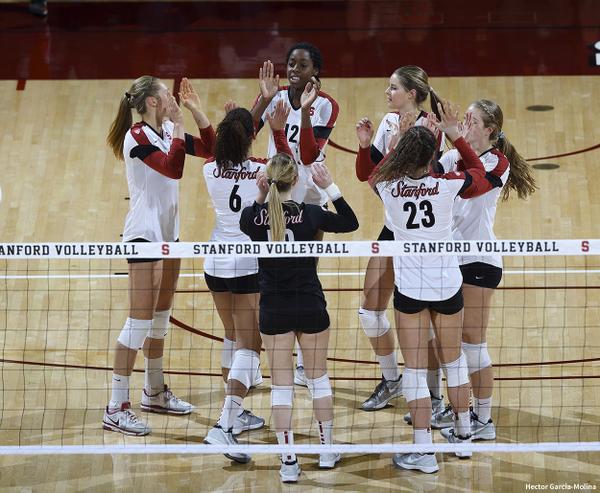 Stanford increased its lead atop the Pac-12 standings with a road sweep of USC on Friday night behind an efficient .373 hitting effort.  Current Photo via Stanford Athletics

Stanford increased its lead atop the Pac-12 standings with a road sweep of USC on Friday night behind an efficient .373 hitting effort.

The win, which marked the 17th straight for the Cardinal, moved the team to 19-1, 11-0 Pac-12 and finished off a season sweep of the Trojans, extending Stanford’s win streak in the series to six matches and overall dominance in the all-time series to 65-26-1.

The Cardinal hit .519 in the opening stanza, while holding USC to a .038 effort. The teams split the first 12 points before Stanford pulled away with a 6-1 run, including two Plummer putaways. The Trojans never recovered as Stanford held at least a four-point edge the rest of the way. Facing set point, USC managed three points in a row, before a service error wrapped up the 25-19 win.

The teams were level at 10 in Set 2, before Stanford put together a 54-0 run, including a kill and a block by Plummer and Fitzmorris. USC was within three at 20-17, but the Cardinal finished off the set on a 5-2 run, featuring two Gray aces, and clinched by a pair of Trojan miscues.

Stanford led by as many as four in Set 3 at 11-7, but USC came charging back with a 9-2 run, to go up 15-13. Four Cardinal errors and kills by four different players guided the rally. Stanford knotted it up at 16 but soon faced a three point deficit at 22-19. Two Fitzmorris kills and two Trojan hitting errors put the Cardinal back on top at 23-22. USC answered with two points to earn the first of two set-point tries at 24-23. After thwarting another attempt at 25-24, Stanford notched five of the final seven points, winning the match on their third match-point try. After a tie at 27, it was a service error and a Fitzmorris putaway that ended the night.

Next up, Stanford plays UCLA on Sunday to wrap up a four-match road trip, while USC plays host to Cal on Sunday.