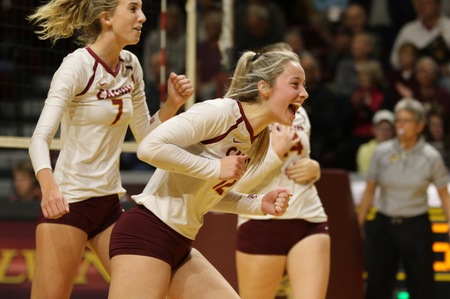 The lone undefeated team in Division III, Calvin College kept its hold on the No. 1 spot in the AVCA Top 25 Coaches poll for the sixth straight week. Current Photo via Calvin College Athletics

Calvin was ranked second in the preseason poll, but took over the No. 1 spot in the Week 1 poll and has gained ground each week, earning all 70 first place votes for the second week in a row.

The Knights won a four-set road match at Trine last Tuesday and swept Albion to move to 15-0 on the year. Calvin is set for a Wednesday road match at St. Mary’s (Ind.) before playing host to the Midwest Invitational on Friday and Saturday, where the team will face Susquehanna, #19 Ohio Northern, Elmhurst and #7 Thomas More.

Claremont-Mudd-Scripps, Johnson & Wales (R.I.), Wittenberg and Colorado College round out the Top 5. Colorado College dropped three spots to No. 5 after posting a 3-1 mark at the Washington University Invitational last weekend. The Tigers swept Wisconsin-Platteville and Wisconsin-Osh Kosh and bested Augustana in four sets, before falling to the host No. 11 Bears in five sets in the finale.

With the win, the Bears moved up two spots to No. 9.

Texas-Tyler climbed three spots from No. 20 to 17. The 15-1 Patriots played just one match on Week 6, topping (RV) Southwestern in five sets on Tuesday.

Johns Hopkins was the biggest mover of the week, dropping nine spots from No. 16 to No. 25. The 14-3 Blue Jays went 1-3 last week, falling to Dickinson on Wednesday (3-1), rebounding with a sweep of Muhlenberg on Saturday and dropping a pair of decisions to Arcadia (3-2) and Susquehanna (3-1) on Sunday.

Seven teams mentioned on only one ballot for a total of 27 combined points.