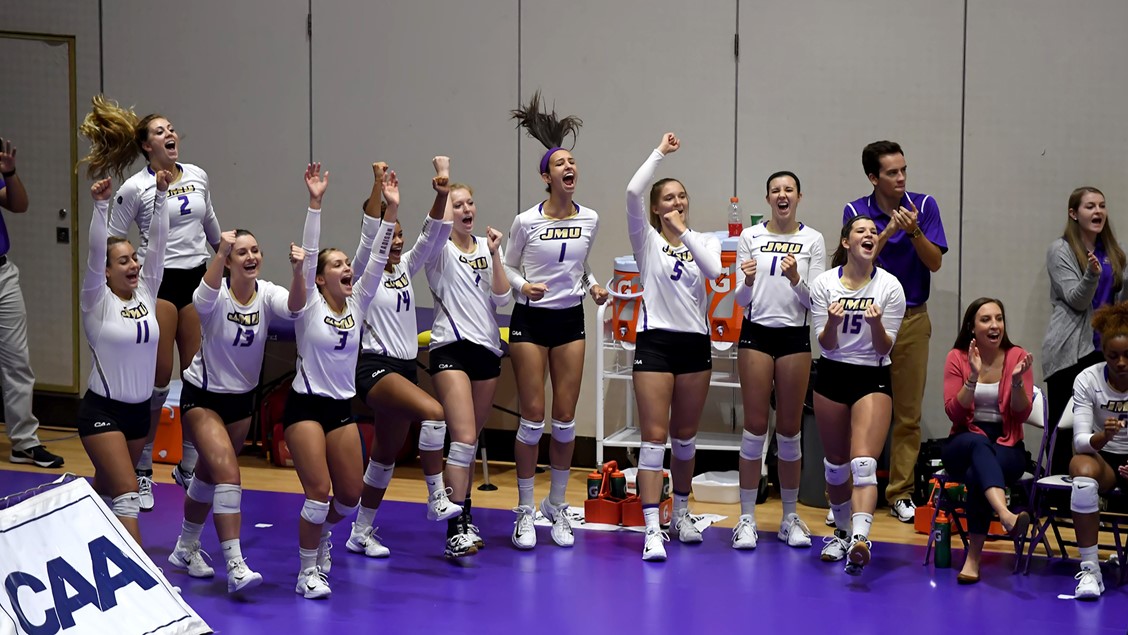 James Madison stayed among the ranks of the unbeaten with a four-set win over William & Mary on Saturday. The Dukes (10-0) face off against Elon on Sunday. Archive Photo via JMU Athletics

WILLIAMSBURG, Va. – James Madison stayed among the ranks of the unbeaten with a four-set win over William & Mary on Saturday. The Dukes (10-0) face off against Elon on Sunday, where they will look to continue the program’s best start in 33 years.

Senior outside Sydney Biniak led William & Mary with 14 kills, while junior outside Heather Pippus (9) and sophomore outside Casey Foote (8) followed. Freshman libero Katie Turner led the Tribe with 13 digs, while freshman outside Lauren Moussaid (11) and Pippus (9) were close behind.

The Dukes hit at a .457 clip in the opening set. After a tie at 5-all, JMU cruised to a 14-7 lead behind three Recker kills and two by Vahos. A pair of James Madison miscues pulled the Tribe within five at 17-12, but the Dukes responded with a 6-0 run, incluidng three White putaways to vault ahead 23-12. Kills by Recker and Tilbe Yaglioglu clinched the 25-14 win.

James Madison jumped out to a 12-3 lead in Set 2 with help from six Tribe errors. William & Mary did not go quietly, however, narrowing the gap to three at 16-13. Pippus recorded two kills and two blocks in the rally, while the Dukes committed three errors. JMU stretched an 18-15 lead into an eight-point win with kills by three different players and three more miscues.

William & Mary regrouped and scored the first five points out of the break, including two kills by Julie Brown. Foote added two more kills as the Tribe went up 8-3. Down 14-9, JMU rallied with seven of the next nine points to pull into a 16-all tie. A pair of blocks and two kills and an ace by Recker were key in the run. William & Mary went back up by three at 20-17 and despite a tie at 21, held on for the 25-21 victory. The Tribe capped the set with a 4-0 run, including two Pippus kills.

The Dukes led by six at 15-9 midway through Set 4. Vahos and freshman outside Liv Crawley notched three kills each, while Recker and Gail added two stuffs apiece in the early stretch. A pair of Sydney Biniak kills cut the margin to five at 20-15, but it was too little too late as JMU scored five of the next six to grab the 25-16 and the four-set win. Two William & Mary errors aided the final run, while a Crawley putaway marked the final nail. JMU notched a .429 hitting effort in the final stanza.