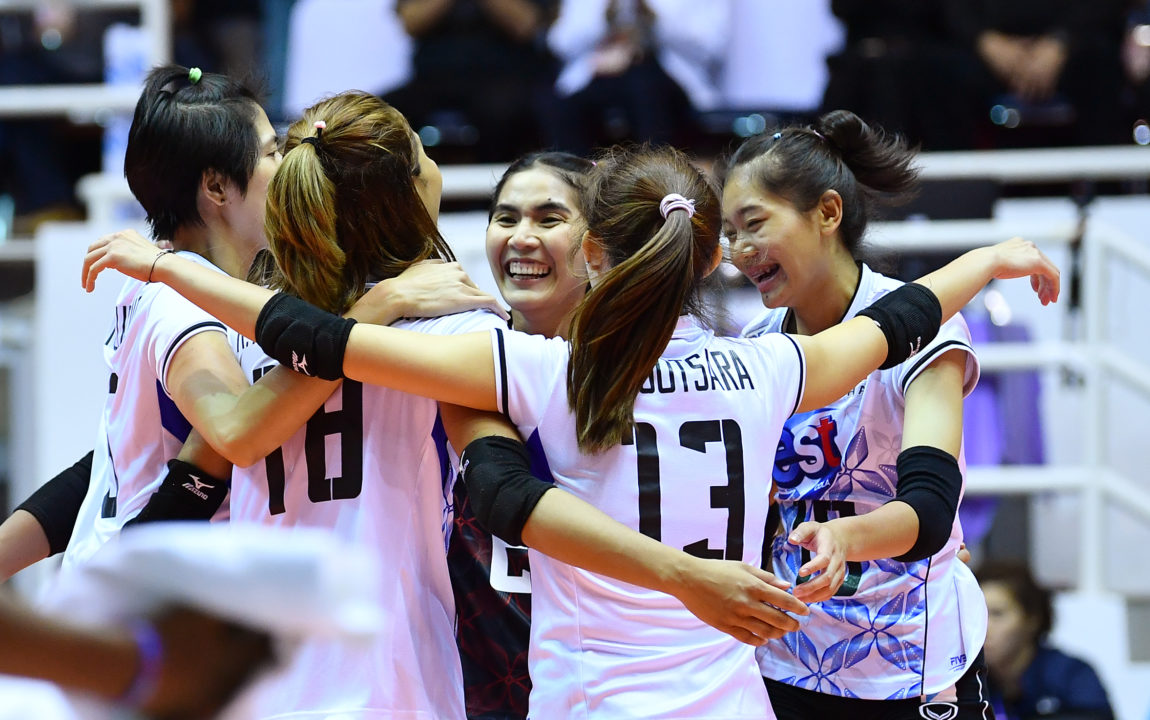 China sits atop Pool A at 3-0, with a match against Chinese Taipei (2-1) looming on Saturday and the victor punching its ticket to the 2018 World Championships. Kazakhstan (2-1) also will vie for a spot at Worlds in a final match against 0-3 Fiji.

China racked up 45 kills, 14 blocks and seven aces in a sweep of Australia on Friday.

“Everything went well in this match with our good coordination,” Yuan said. “I am really happy and proud to be part of this team.”

Eight blocks helped the Chinese to the 25-15 opening set win. A strong serve and more blocks gave China a crushing 25-6 Set 2 victory. Australia improved in the final set, but could not compete with the Chinese block and offense in a 25-20 loss.

Yekaterina Zhanova scored a match-high 23 points, with 14 kills and nine blocks as Kazakhstan gave itself hope for a ticket to Worlds with a four-set win over Chinese Taipei.

“Our test was to play through this qualification to get the ticket to the World Championship,” Kazakhstan coach Vyacheslav Shapran said. “We knew from the beginning that our main opponent was Chinese Taipei. They are a really good team and at times, it felt almost impossible to defeat them.”

Kazakhstan used a stout block and strong serve receive en route to a 25-15 Set 1 win. Chinese Taipei mixed up its offense in a 25-19 Set 2 victory as Chen Tzu-Ya, Tseng Wan-Ling and Chen Yi-Ju aided the team in the win. The Kazakhs overcame Chinese Taipei aces with kills by Zhdanova and Bogdashina in Set 3 en route to a 25-19 victory. The final stanza, a 25-20 Kazakhstan win, went through Anarkulova.

A 12-point effort from Kim Yeonkoung helped lift Korea to a sweep of Vietnam on Friday, clinching the team a spot at the 2018 World Championships with a top two spot in Pool A.

Korea cruised to a 25-13 Set 2 victory, then ran out to a 17-6 advantage in Set 3. Vietnam thwarted five match point attempts before eventually succombing.

“At the Asian Championship in Philippines last month, we struggled to beat Vietnam 3-1 and so, we trained much harder here and played them easier this time,” Korean head coach Hong Sungjin said. “I think our receiving is improving, while our blocks and attacks remain our strong points. In our last match against hosts Thailand, we will try to do our best, but young players will also be sent on court to gain experience.”

The teams played to a 21-all tie in Set 2. A Jong Jin Sim service error gave Thailand the lead and the team ended the stanza on a 3-0 run.

Set 3 was over by the midway point as the Thai side boasted a 16-9 advantage and cruised to a 25-19 win, much to the delight of the home fans.

“My players’ performance lived up to staff coaches’ expectation,” Thai coach Danai Sriwacharamayatakul said. “It was just the very first mission of our team to qualify for the Japan Finals. However, I praised DPR Korea for their solid performance in this match against us. Captain Jong Jin Sim played well beyond my expectation, but fortunately we served well, forcing them to drop their rhythm at the near end of each set. Howevver, we have to improve more on defensive structure in our next match against Korea. Since the tournament is being held at home, we have to play our best against Korea although two of us have already qualified. We have to play them in several tournaments in the near future. It will also serve as a technical test for my players.”